Any Paris guidebook will confirm it: while the chic boutiques and department stores are not to be missed, to round out a truly Parisian experience you must visit its flea markets and second-hand antique shops. Nothing beats the rush, they say, of spotting that gem hidden in plain sight under a century of dust and neglect – an old family heirloom from the attic of a calloused-fingered French grandma just waiting to fulfill its destiny of decorating your home. 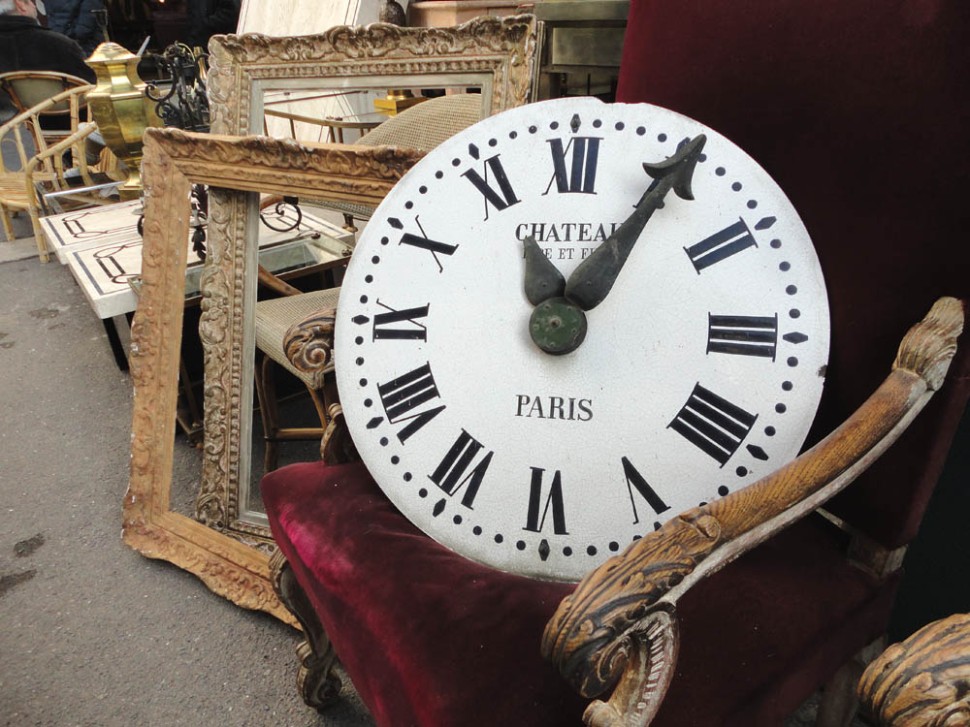 One Sunday as my wife and I brainstormed an acceptable married couple activity, we realized the flea markets were a perfect fit: the designer in her would fawn over the vintage decorations, while I the Paris nerd could admire another historic site. I’d heard after all that it was here in Paris where the world’s first marché aux puces (market of the fleas), was created. Surely I had to check it out.

We headed to the antique markets of Saint-Ouen which are just north of the city and considered to be some of the best in the world. Once you bypass the cheap knock-off items along its periphery, the more reputable areas inside give a sense that you’ve stumbled onto an old treasure trove. We were immediately under its spell. 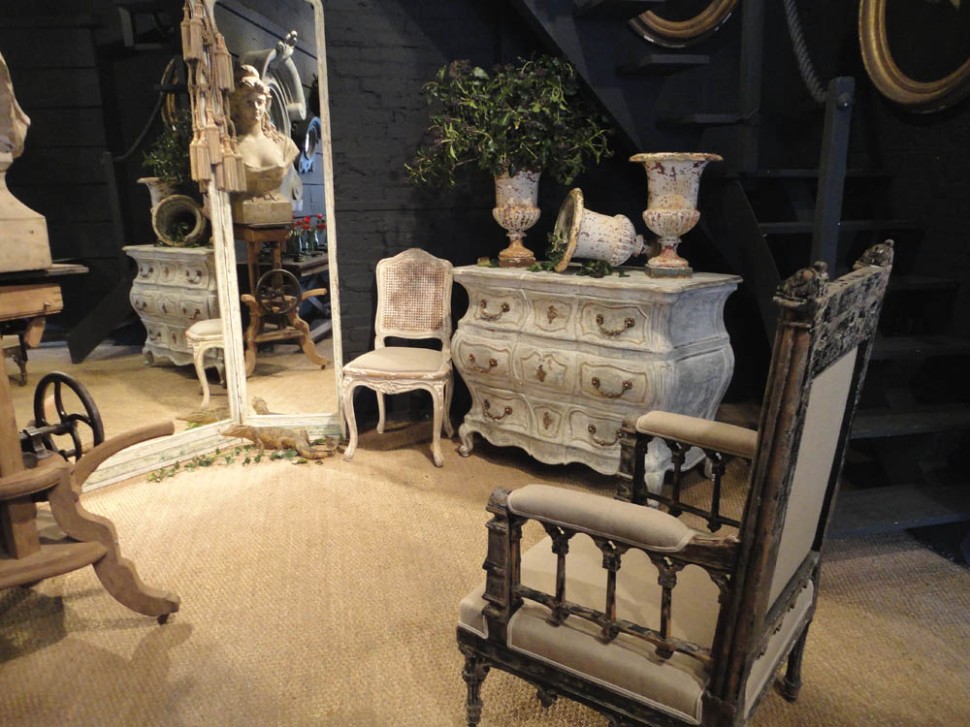 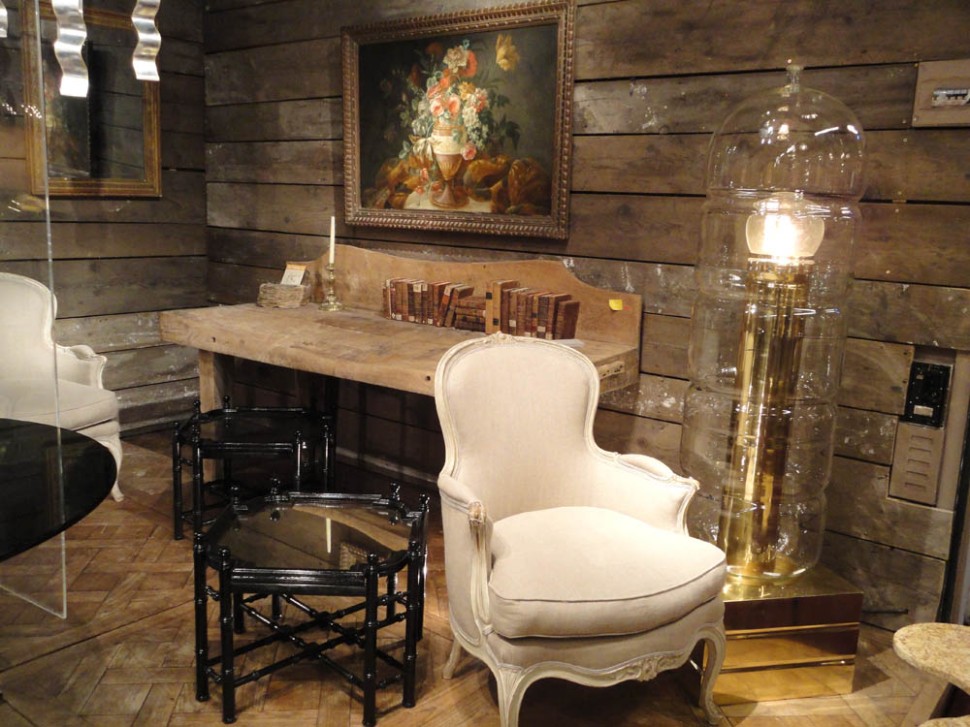 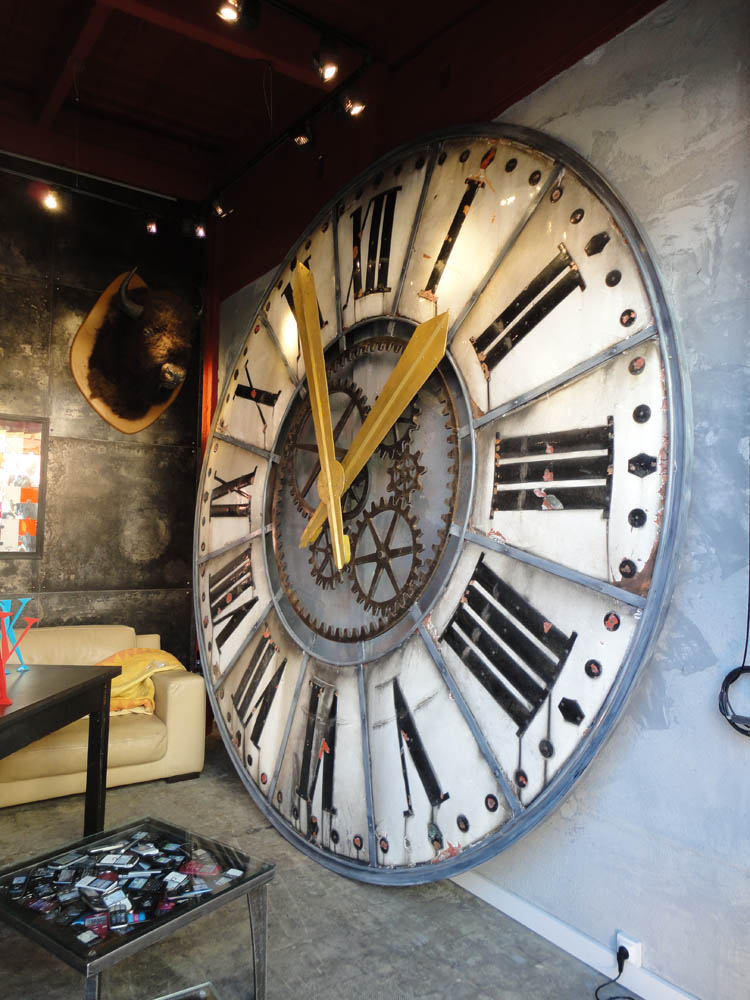 The markets are arranged like a small village. A network of narrow pedestrian lanes are lined with tables and large vendor stalls that tempt you from all angles. Our conversations between each other were always variations on the same theme: “Honey, look at that!” or “Wow babe, check this out!” or “Yeah that’s cool but you’re gonna love this!”

Early on it became clear that the visit would be window shopping only (the first chairs to catch her eye cost 1,000€ each), but that only slightly diminished the fun. She dreamed of constructing the perfect home interior; I fantasized about discovering a long-lost Matisse or original Declaration of Independence hidden in the backing of an amateur painting. 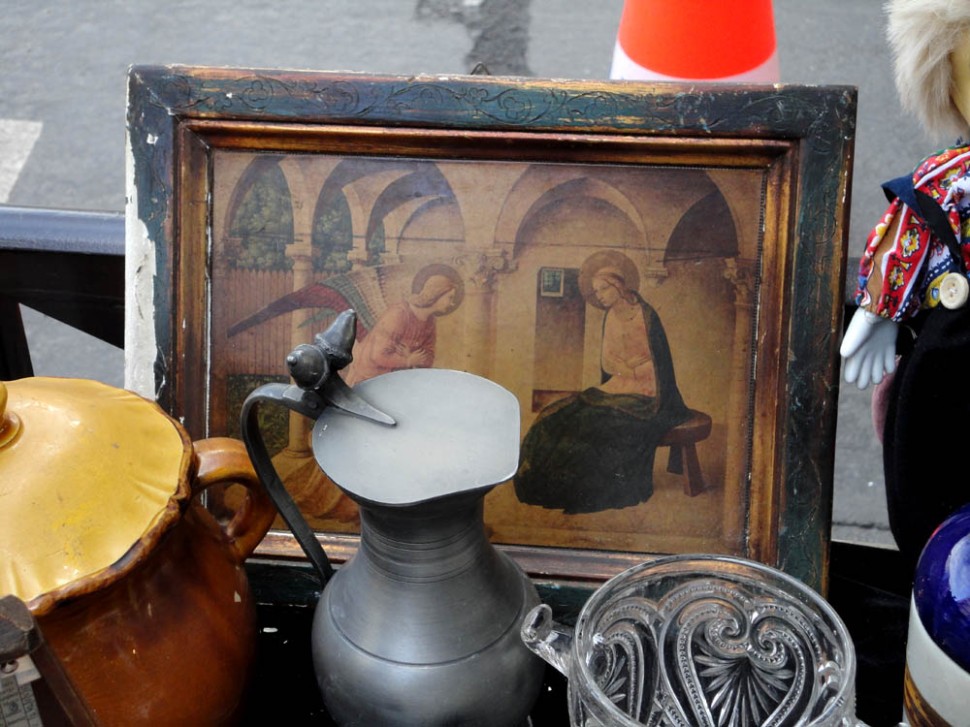 In regards to the photo above, I wondered if it could be an overlooked original by Renaissance master Fra Angelico. Had I finally found my secret jackpot? The fact that it seemed to be a poster glued to a board raised some doubts. There was also the matter of a large sticker on the back listing the artist’s name and birth date for all to see. It was also on a discount table selling for two euros. So maybe this wasn’t my life-changing hidden treasure moment.

But another kind of fantasy came to fruition when I turned a corner to find I’d walked straight into the archetypal Paris dream. It had that odd feeling of distant familiarity that happens when you recognize a site from a movie…and this wasn’t just any movie! 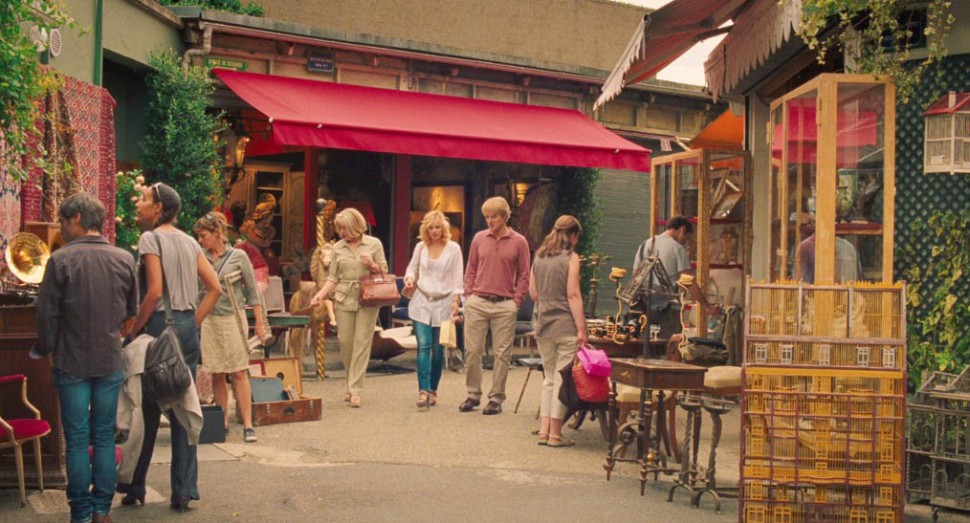 Midnight in Paris, a favorite of mine, was filmed party in these antique markets and I was tickled to find myself in the same spot. Not surprisingly, Woody Allen “charmed up”the area for the shoot: in the screen capture above we can see oriental rugs and shrubs were used to hide the public restrooms, and the prop objects for sale in the movie look a lot slicker compared to real life. But hey, that’s Hollywood. Here’s a shot of mine to compare, with the same red awning: 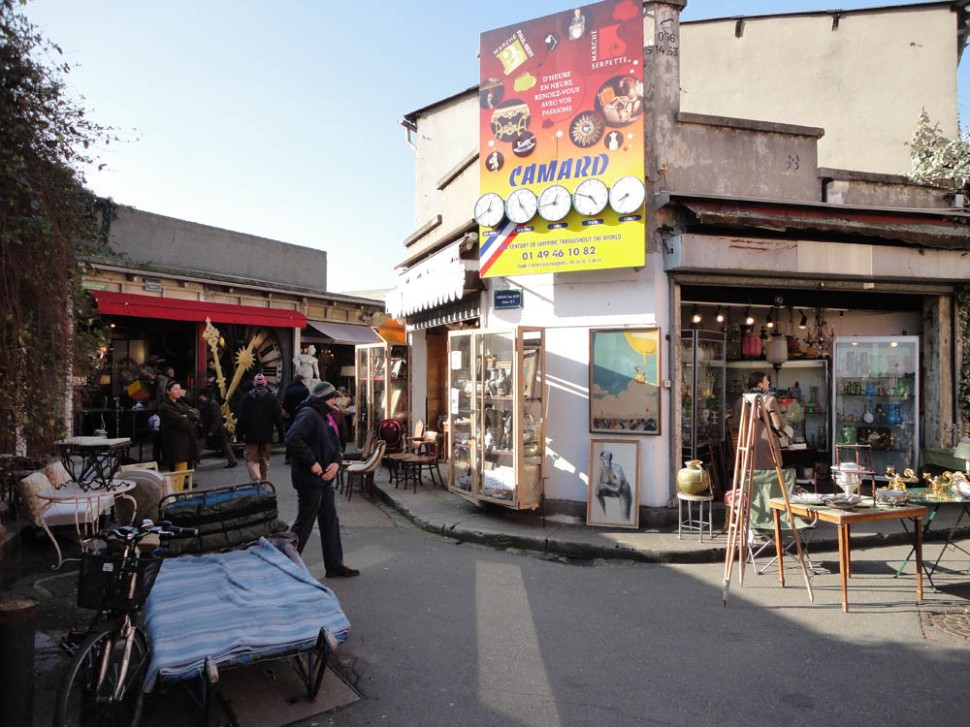 With that pleasant movie moment acknowledged and absorbed, we continued our search for old and interesting things. The variation of items was impressive: tiny delicate objects, large imposing ones, art and sculpture, furniture and animals – as much as your eyes and imagination could ask for. 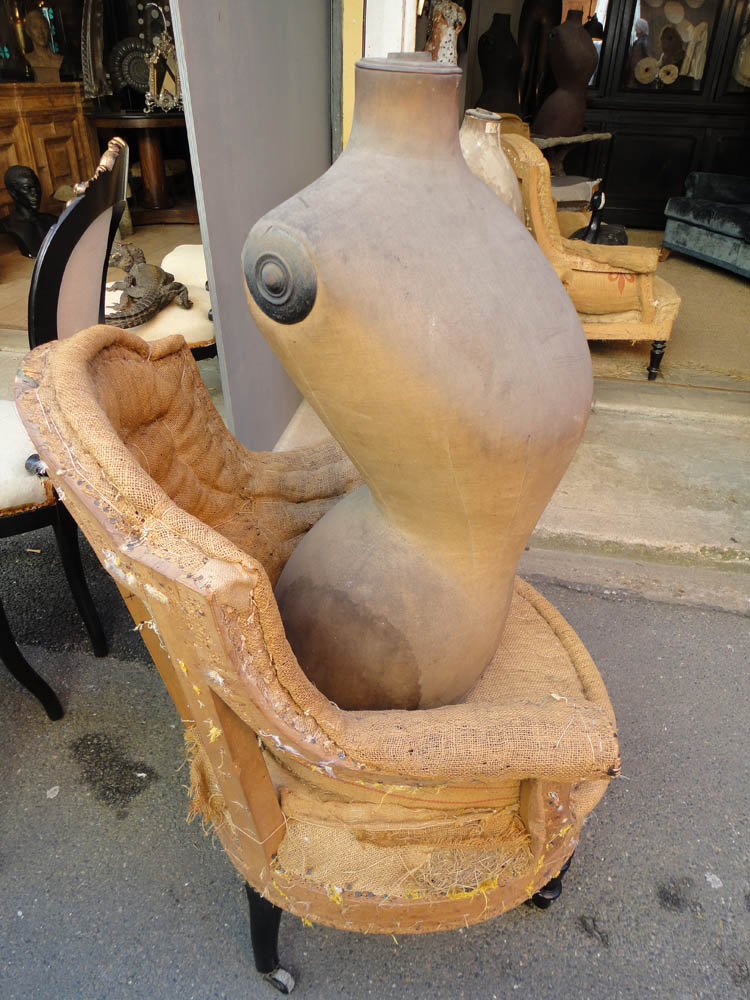 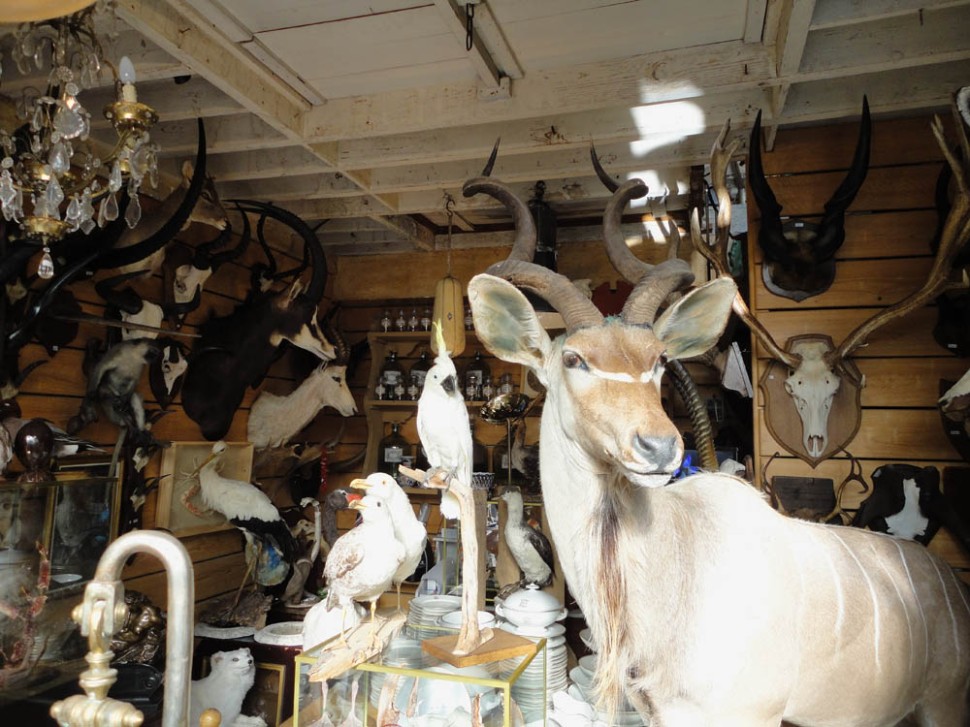 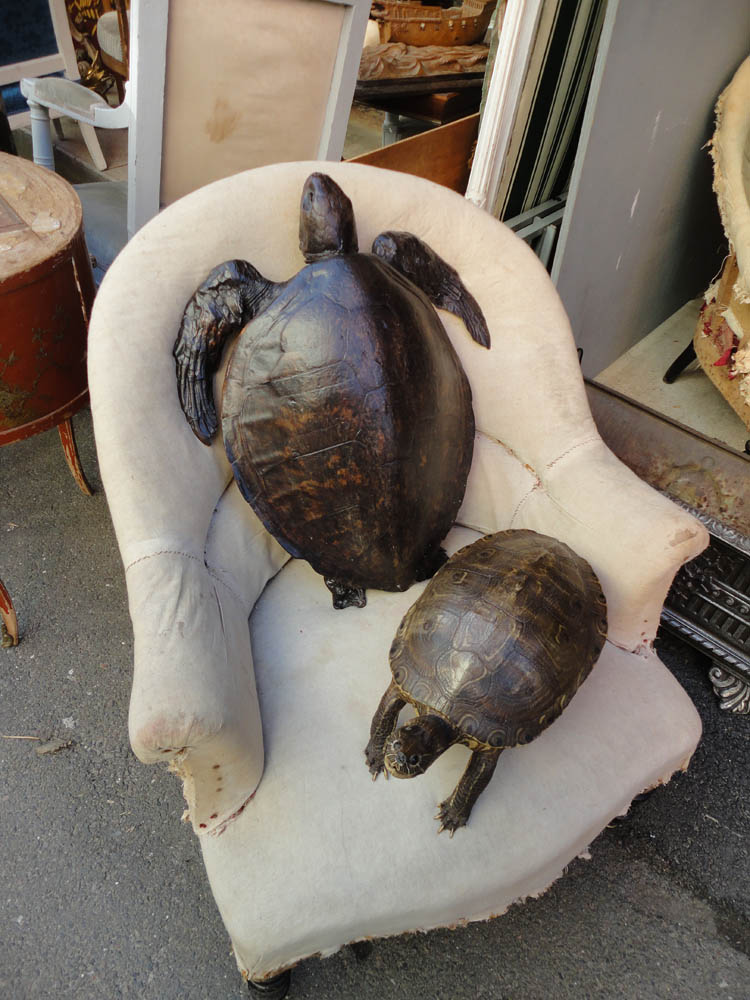 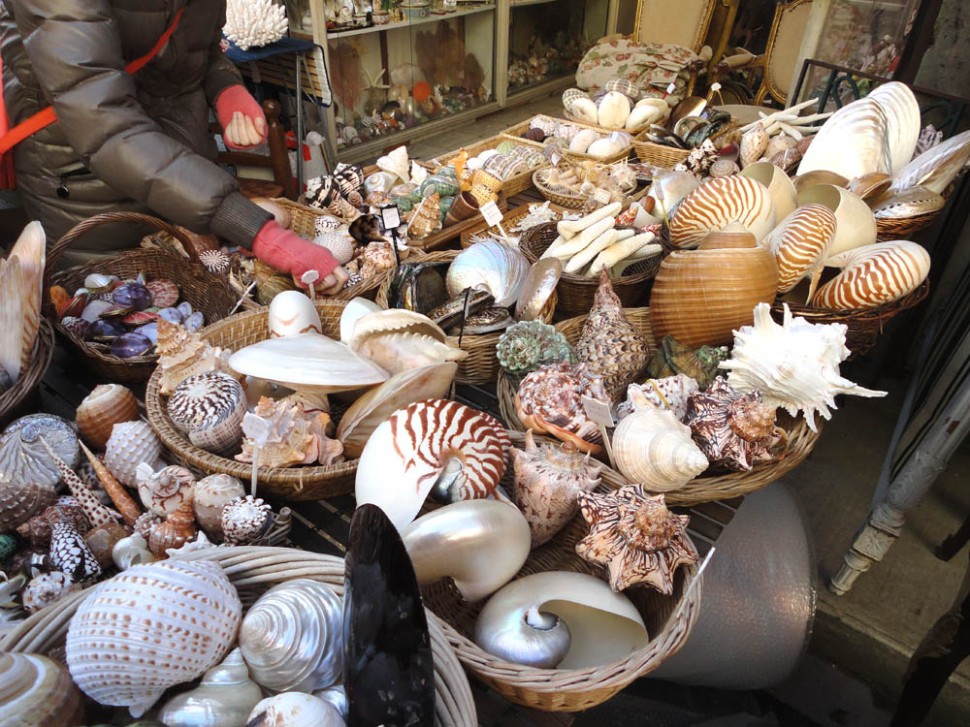 My wife rediscovered her childhood love for croquet when she saw a vintage set in a window display, and I imagined the joy on the little French boy’s face when he first received the old go-cart atop the roof of vendor’s stall: 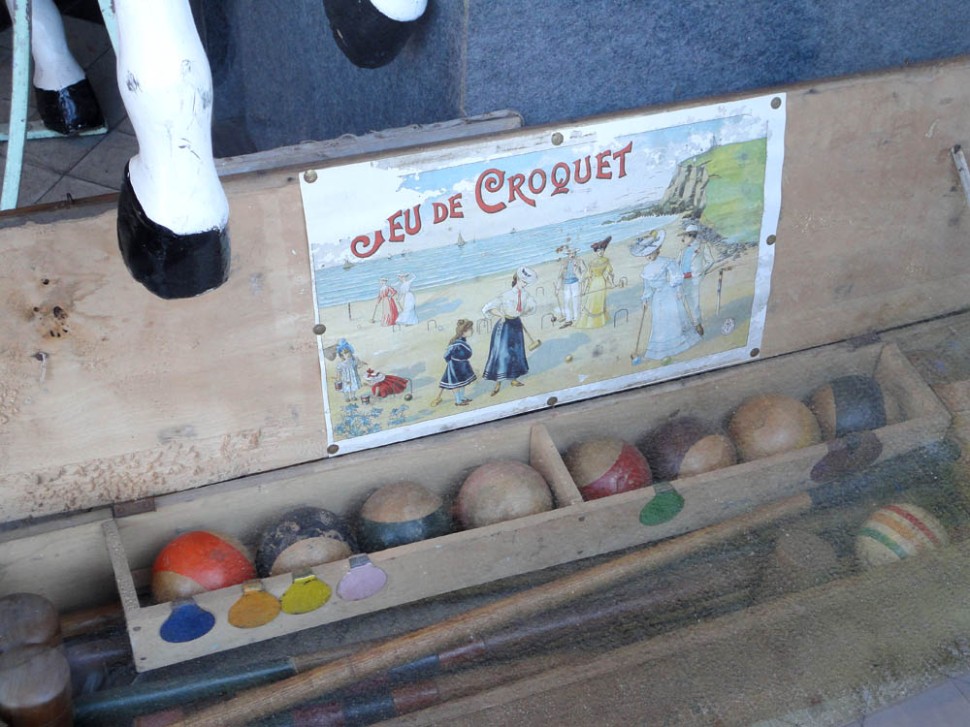 In this market you could furnish yourself with the necessary parts for whatever project you had in mind, whether it be a Gothic facade for your apartment… 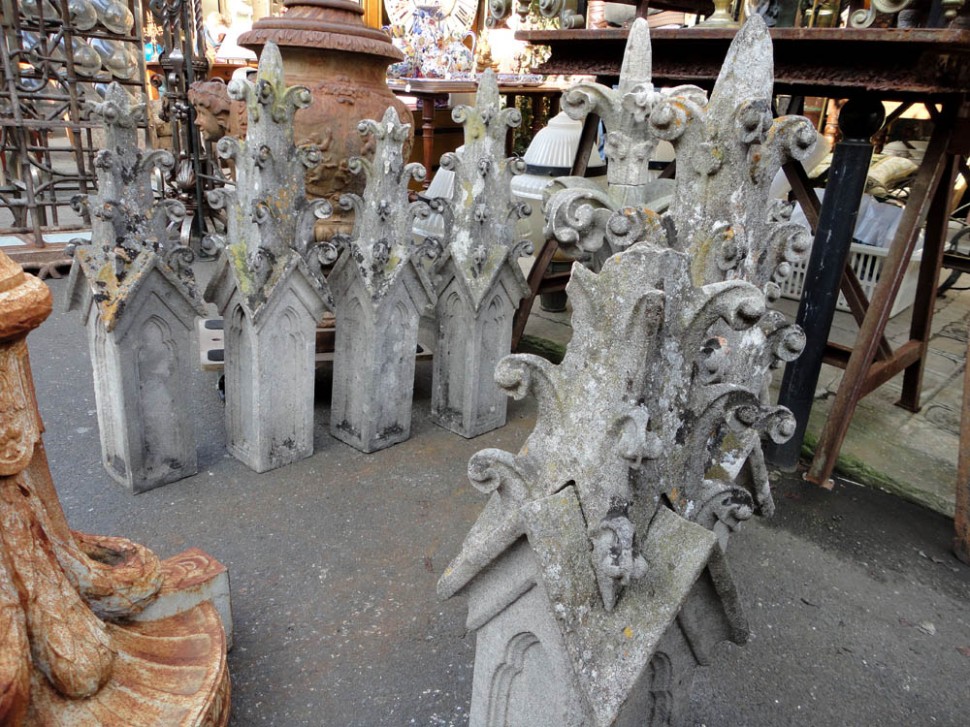 …or a classical sculpture garden (complete with urinating cherub fountain).

Some objects invoked stories of a Parisian past. What sorts of tawdry scenes did this lamp-post once illuminate? How many old bottles of French wine did that basket of corkscrews open? How many dapper gents in their Sunday best strolled the boulevards of Paris with those canes in hand? 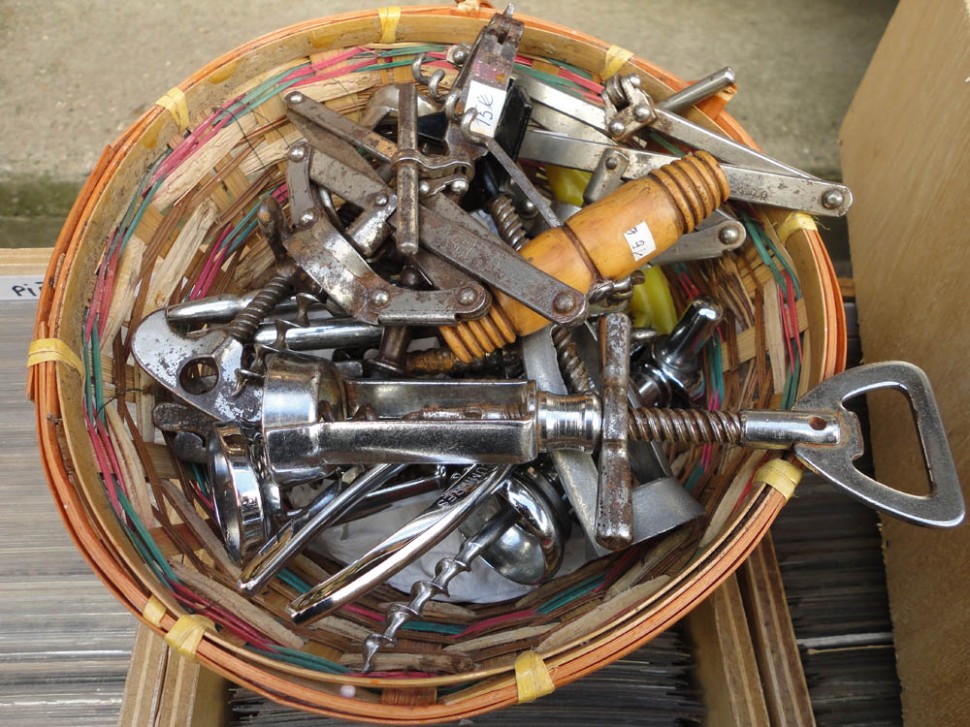 After killing several hours and buying way too many discounted tomes at the bookstore, I had become a believer in the flea markets of Paris. But our eyes and stomachs and feet were all asking to call it a day. Just before exiting, one more item caught my eye – a tantalizing reminder of all those treasure-finding possibilities:

I started to approach it for a closer look, searching for tell-tale signs that it might be an authentic…

It was true. I was too tired and hungry and was carrying too many heavy books. My life-changing art discovery would have to wait for another day.

*The Saint-Ouen market is large and made up of several smaller markets connected to each other. In order to avoid the bad stuff and focus on the nice areas shown here, I recommend the Paul Bert and Serpette areas.