“What [Quasimodo] loved above all else in the maternal edifice, that which aroused his soul, and made it open its poor wings, which it kept so miserably folded in its cavern, that which sometimes rendered him even happy, was the bells.” –Victor Hugo, The Hunchback of Notre Dame

Recently the nave of Notre Dame was the site of a unique meet-and-greet as a handful of fresh Parisian residents were on hand to say hello to their new neighbors. To celebrate the church’s 850th birthday, nine freshly-cast bells are being installed to bring the cathedral back to a former audible glory it hasn’t seen since the 17th century. 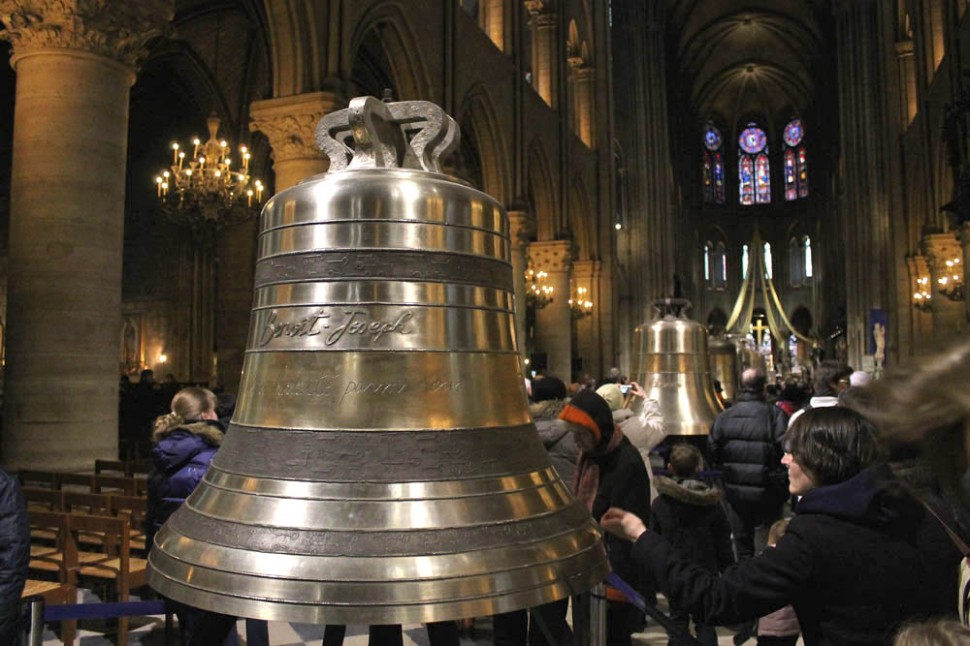 As charming as it is today to be within earshot of the towers as they bellow out their tones, apparently what we’ve been hearing is a faint echo of what listeners enjoyed centuries ago. The two large belfries originally held a total of ten bells—twice as many as today–which allowed for a melodic range and harmonic richness worthy of the building that housed them.

But the storm of the 1789 French Revolution would tear through much of religious France, reducing 80% of the country’s bells to molten metal bound for cannon molds. Notre Dame wasn’t spared; nine of its ten bells suffered the same fate. Its largest, a 14-ton bourdon cast in 1686 and named Emmanuel, was dismantled from the south tower but luckily never destroyed. Napoleon would replace it once the revolutionary dust finally settled, in 1802.

Later Napoleon III, always keen on completing his uncle’s unfinished business, ordered 4 small bells for the north tower to accompany the sole survivor Emmanuel. This 1856 configuration is the one we’ve come to know today; it chimed to mark the end of World War I, to celebrate the liberation of Paris from the Nazis in 1944, and to honor of the victims of 9/11. But despite having garnered their own historical significance, the four bells are made of a low quality metal which produces a weak sound and discordant harmonies, making them some of the most out-of-tune bells in France. They were also never properly tuned to Emmanuel, and with only five notes available the melodic possibilities were limited.

Church officials saw the 850th anniversary as an occasion to put things right, musically speaking, by ordering a set of bells to faithfully mimic the cathedral’s pre-Revolution sound. Eight of them were created in northern France following medieval techniques: a mixture of 78% copper and 22% tin was melted in a furnace of wood and coal, which was then poured into traditional molds made of clay, horse droppings and goat hair. (Photos courtesy of Notre Dame’s website) 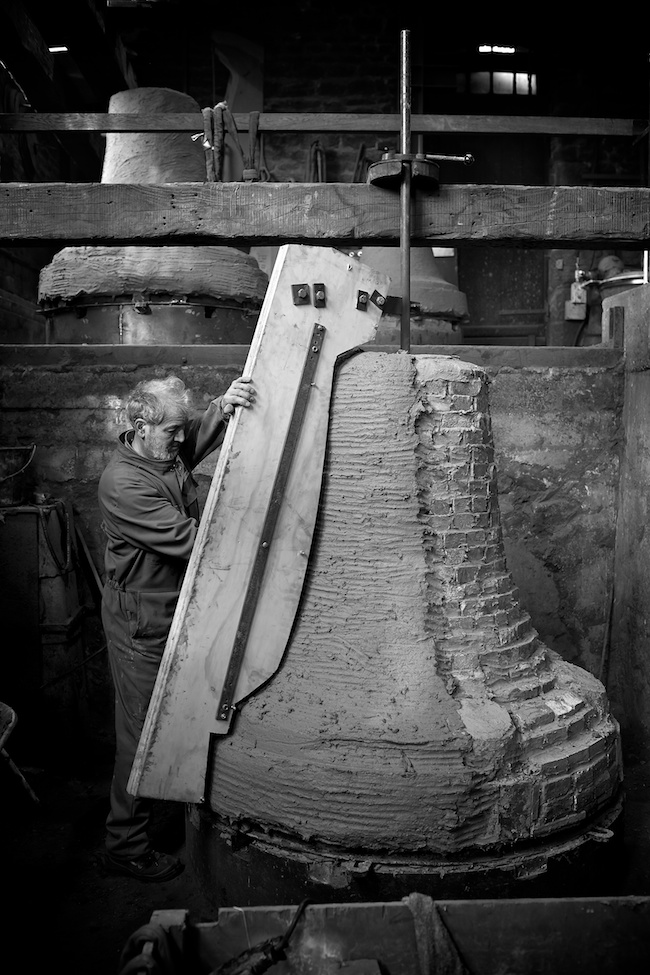 Once cooled, the old-school objects benefited from some 21st century tweaking in the form of computerized analysis to ensure proper tuning. Each bell represents a note of the F# major scale, spanning more than an octave, allowing the church to sing just about any tune it wishes. The largest of them will join Emmanuel  in the south tower; the other eight will ring nearby in the north tower.

Each bell was named after and dedicated to various saints and prominent Christians, including “Maurice” in honor of Archbishop Maurice de Sully who laid Notre Dame’s first stone in 1163. Unique hand-crafted ornaments were added to each and include various symbols and religious phrases. Among my favorite details are a band of  medieval-looking keys, and a faint floor plan of the cathedral itself: 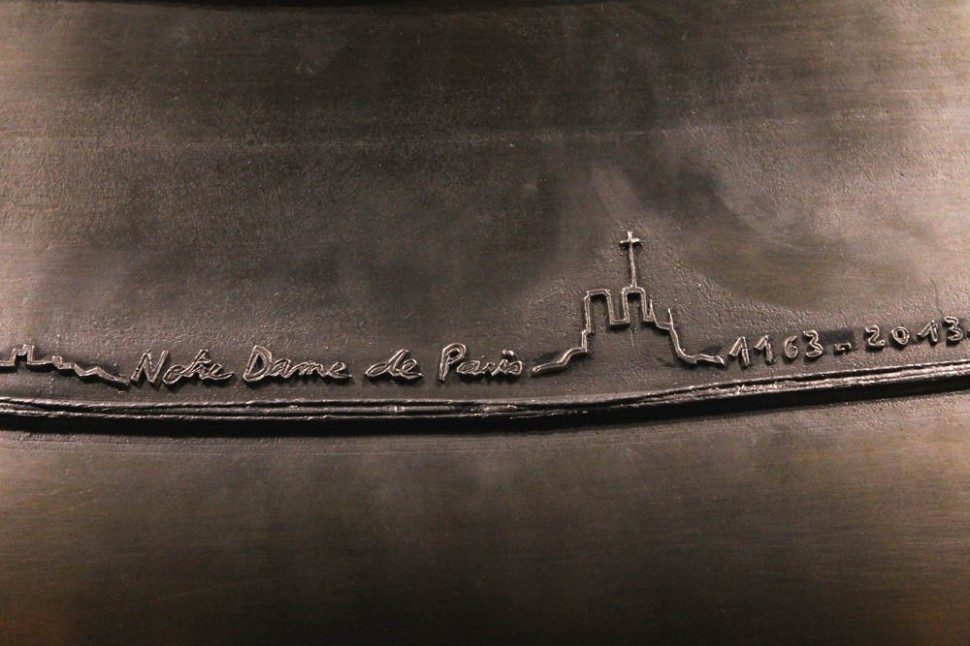 I spend most of my free time wrapped up in the history of Paris, pouring over photos and anecdotes, ingesting dates and names, scanning and dog-earing pages. The number of noteworthy events is as staggering as it is humbling, and it always leads to an inevitable question: How does my life fit into this history, if at all? I often wonder if I’ll ever be lucky enough to witness something chronicle-worthy, to hitch my little mortal wagon to one of those moments and ride it into the history books.

As I circled around these new bells I felt like I was doing just that. I observed them from afar and up close; I touched them as if I were touching the distant future and ancient past at the same time. I even rapped my knuckles on a few, coaxing out deep even tones that swelled up softly from beneath the commotion of the crowd. I tried to get my head around it: the vibrations I was producing with my hand would be washing over the streets and stones of Paris for the next…who knows, three hundred years? Five hundred? 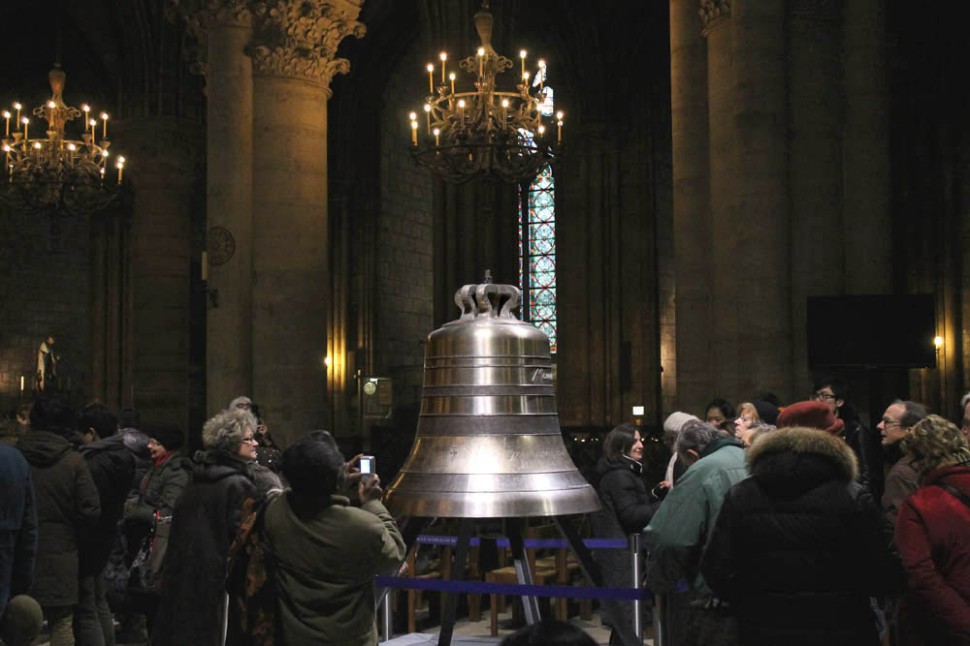 By then they’ll probably be known as the “Historic Bells of Notre Dame”, installed way back in the 21st century. And maybe a handful of future Parisians will think back to those sepia-stained antique days of 2013, imagining what it would’ve been like to be there in person, to be one of the lucky few to make them sing with the rap of a mortal knuckle. For once, it’ll be a historical footnote I won’t need an old photo or anecdote to remember.

The bells are scheduled to ring out across the city for the first time on March 23rd. You can bet I’ll be there to listen to them, and you can bet there won’t be a hunchback in the crowd any happier than this one.