Wednesday afternoon was a warm one and I decided to take advantage by checking off a certain historical landmark I’d wanted to see for a long time. Constructed in 1230 as a refectory for the monks of a medieval abbey that no longer exists, the building now serves as a library for the students of the Conservatoire des Arts et Métiers. I had marveled at pictures of its fine Gothic interior and vaulted ceilings and I needed to finally see it with my own eyes. But before I show the great shots I managed to capture of it, I also saw a few things along the way.

It was almost 2pm by the time my quest had started so I grabbed an affordable bite to eat in the Châtelet area, just a short walk from my destination. The nearby Fontaine des Innocents looked too enticing to pass up so I shooed away a few pigeons and enjoyed my lunch in front of the city’s oldest monument fountain, and the only one remaining from the Renaissance. 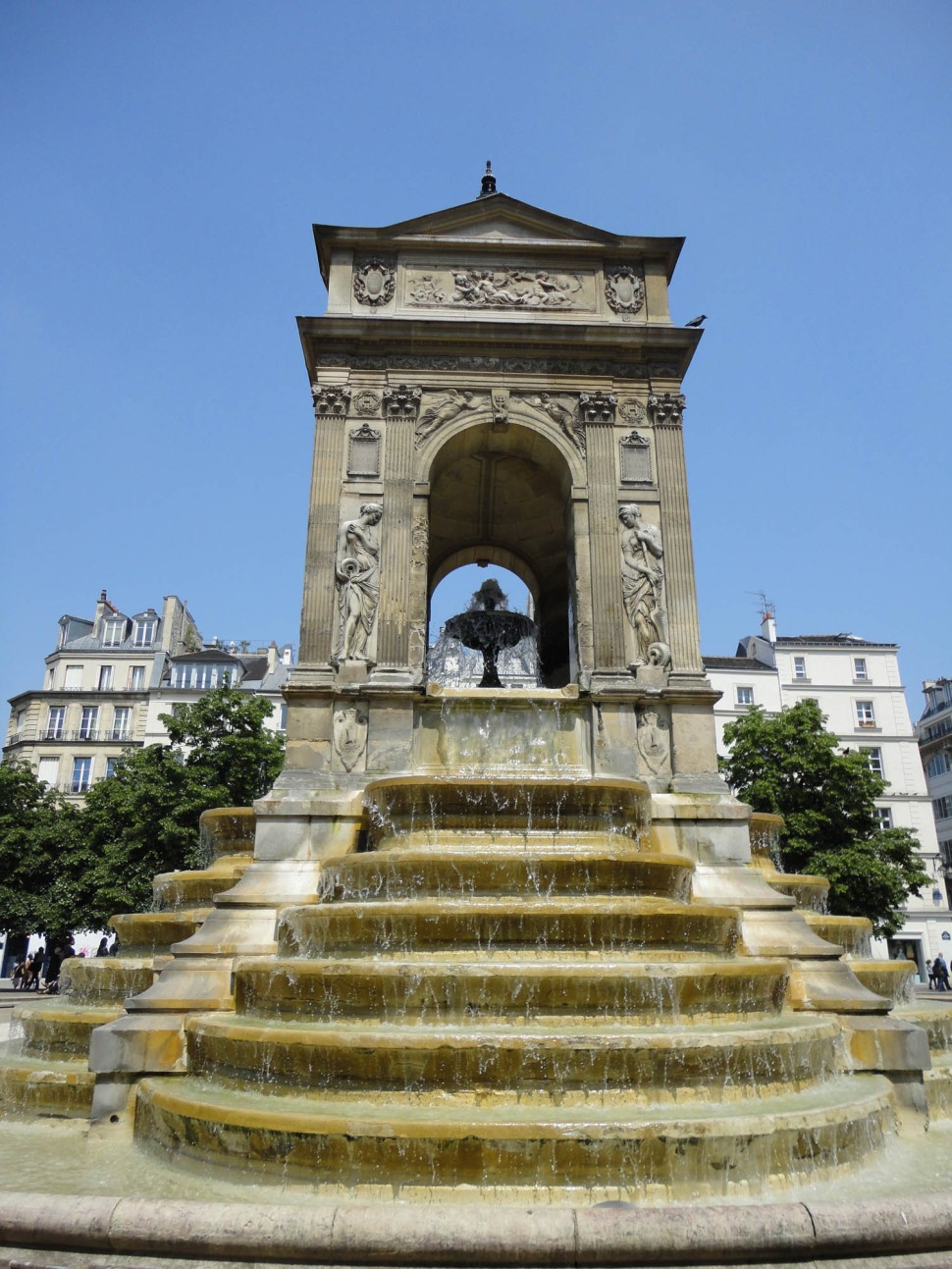 I recalled how the fountain’s designer was the same architect responsible for the old facades of the Louvre we see in its eastern courtyard, and I tried to compare the two in my mind between bites of my sandwich and defenses of my frites against aggressive birds.

From there I started my short walk, but finding the church of Saint-Leu-Saint-Gilles along the way, I decided to pop in. 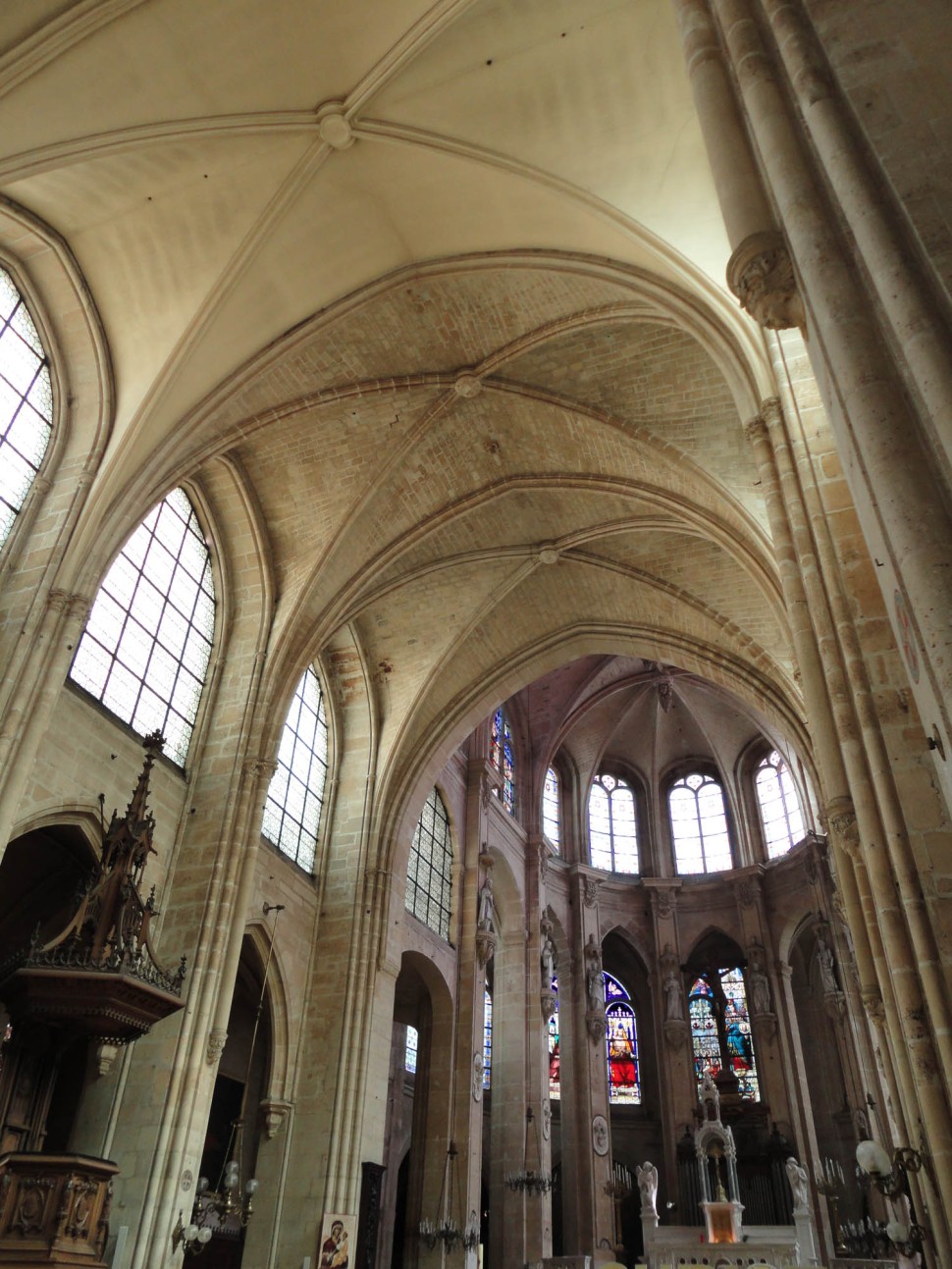 I was surprised to learn it’s the parish church of an ancient order of chevaliers dating back to the religious crusades. They are responsible for the safeguarding of several holy relics, including Christ’s Crown of Thorns which is kept in the treasury of Notre Dame and brought out the first Friday of each month for crowds of believers who line up to kiss it. This adjoining room appeared to be one of the order’s offices: 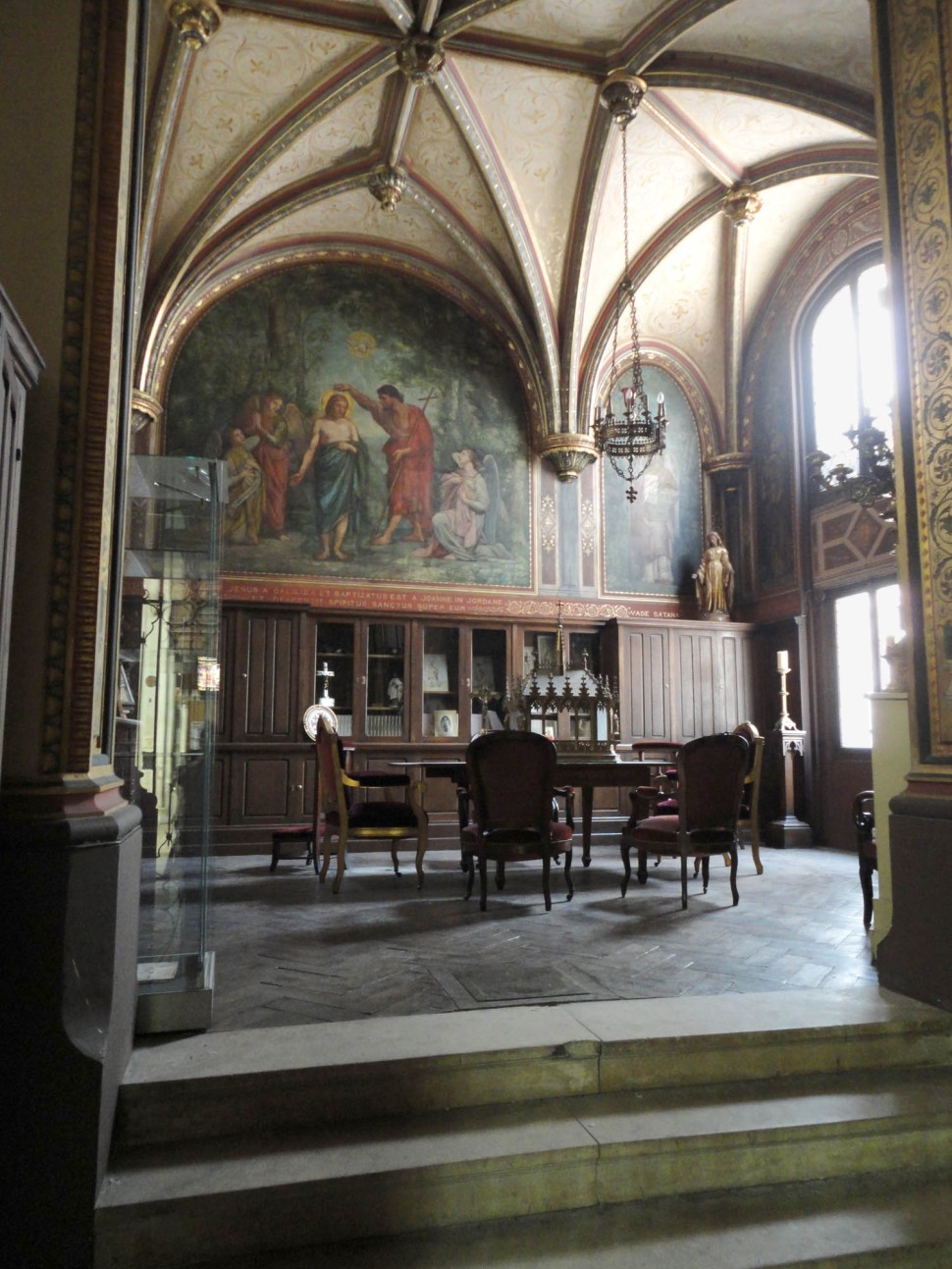 Knowing that such a powerful group of “knights” made this church their headquarters made me want to behave extra-well inside it, but that didn’t stop my phone from going off on two separate occasions, forcing me to make respectful mad dashes to the exit each time. In between calls I managed to enjoy the interior spaces, including a poignant view of a mom parking her baby stroller near a chapel for a prayer. 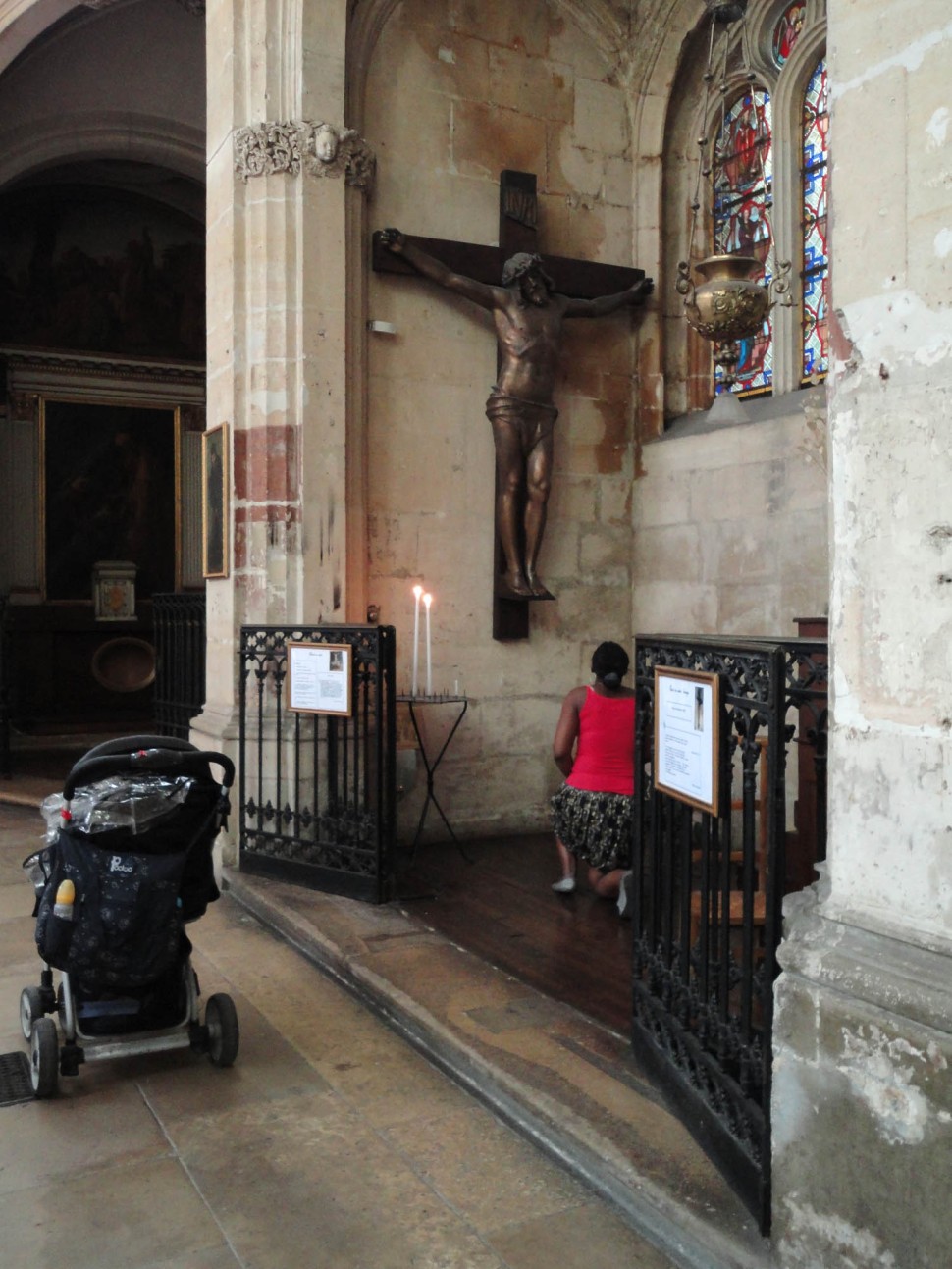 Outside I found a hilarious old municipal message attached to the side of the building, something I’ve never seen before and which may not exist anywhere else. The message almost disappears into its background but a close look reveals the beginning of an authoritative message: “DEFENSE D’URINER CONTRE LES MURS DE CETTE EGLISE”, in other words: “It is forbidden to urinate on the walls of this church”. Clearly there was a time in Paris during which the act of pissing on religious monuments was still…morally ambiguous? 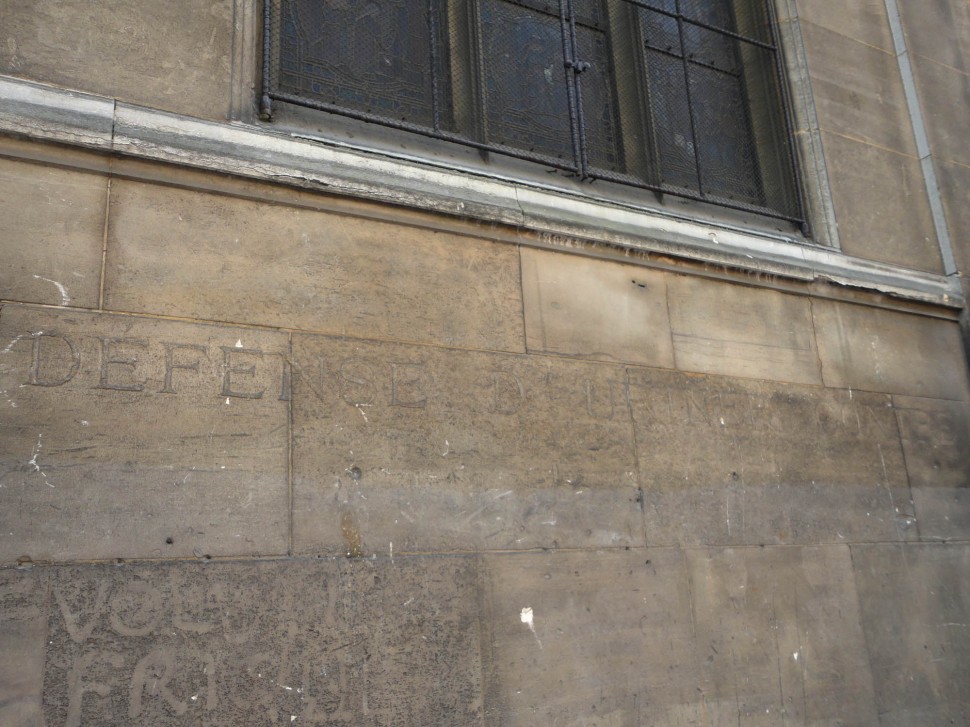 I set myself back on track toward the Gothic refectory, spotting some nice details along the way, the old headquarters of La Résistance from which they fought to push Hitler out of town (48, Boulevard de Sébastopol)… 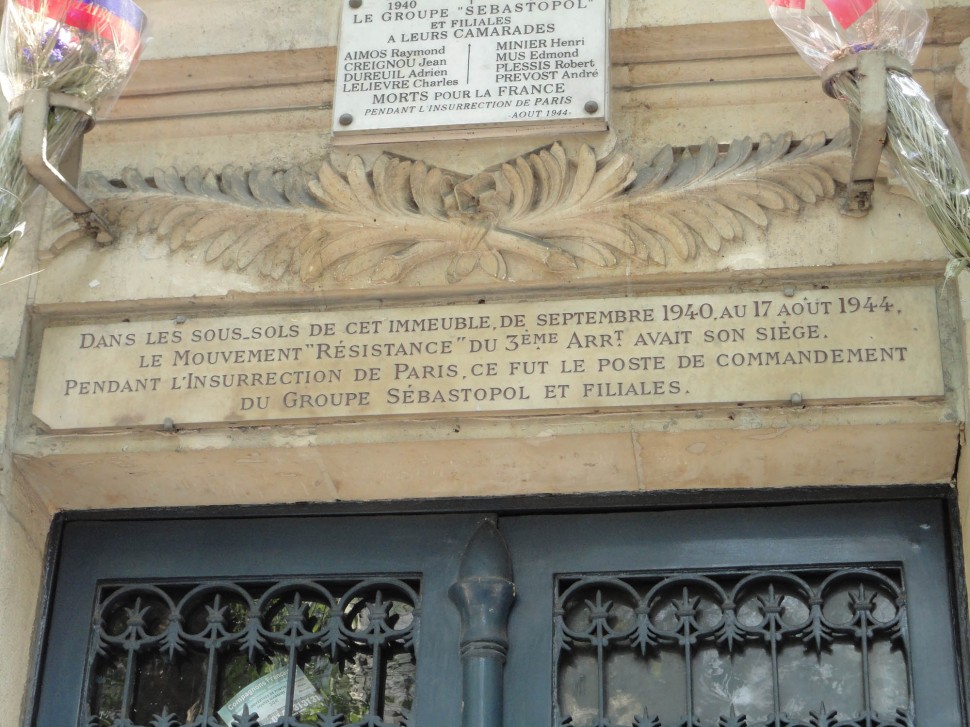 …and some medieval carvings from the oldest house in Paris, built 1407… 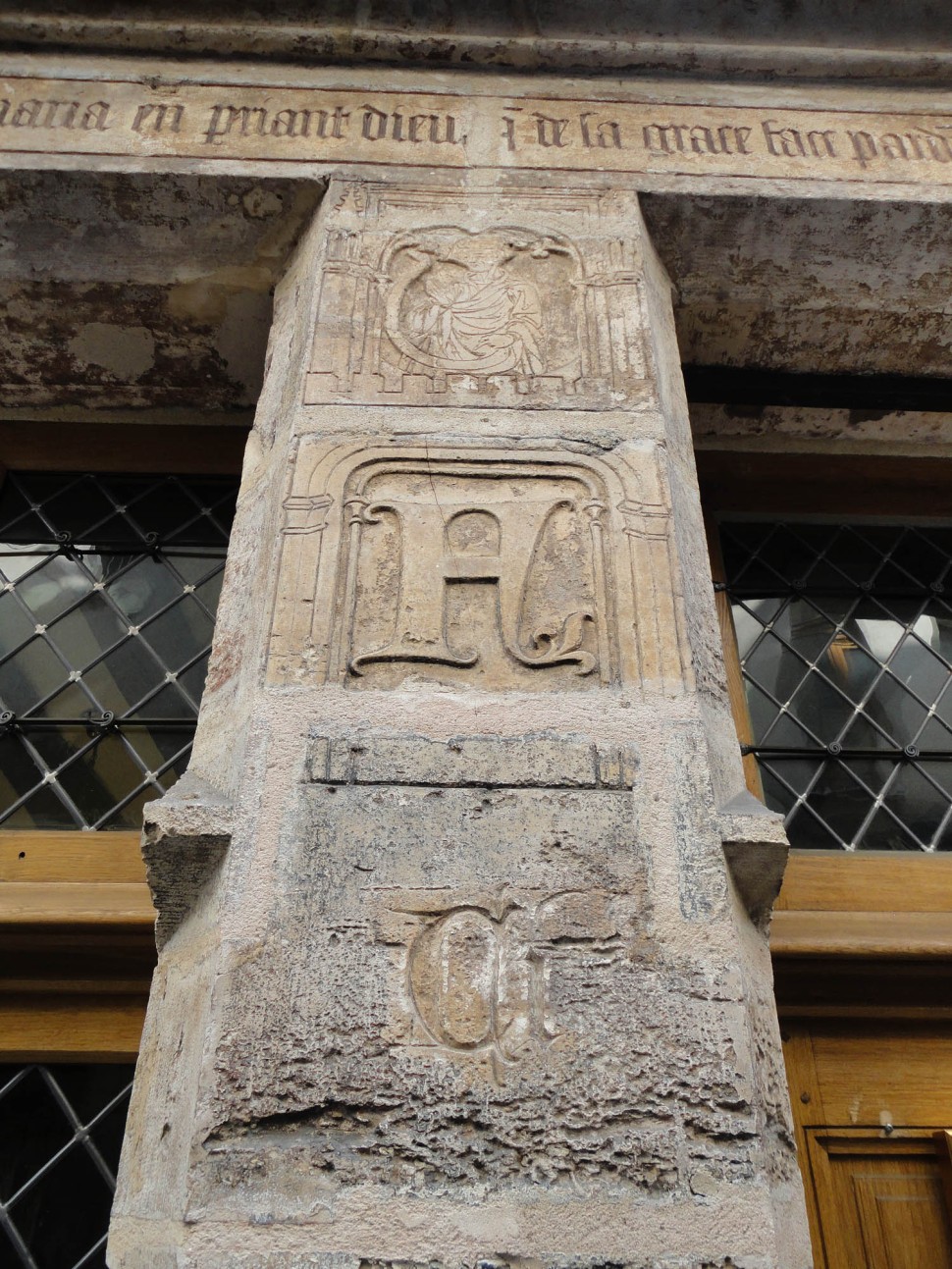 …and out of nowhere the Passage de l’Ancre, a charming leafy alley connecting two busy avenues. 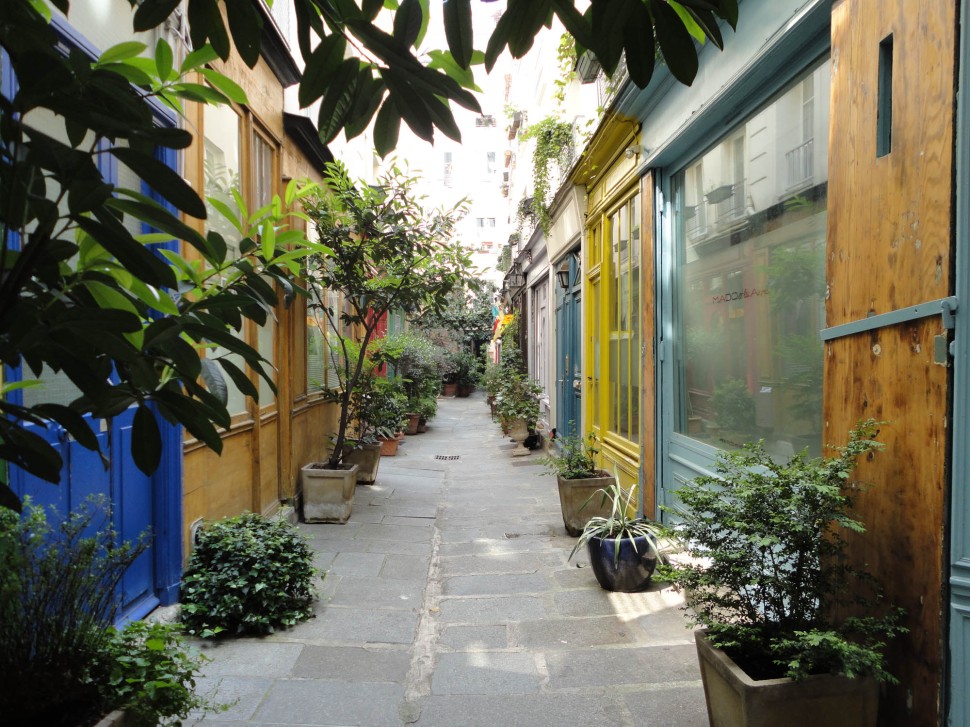 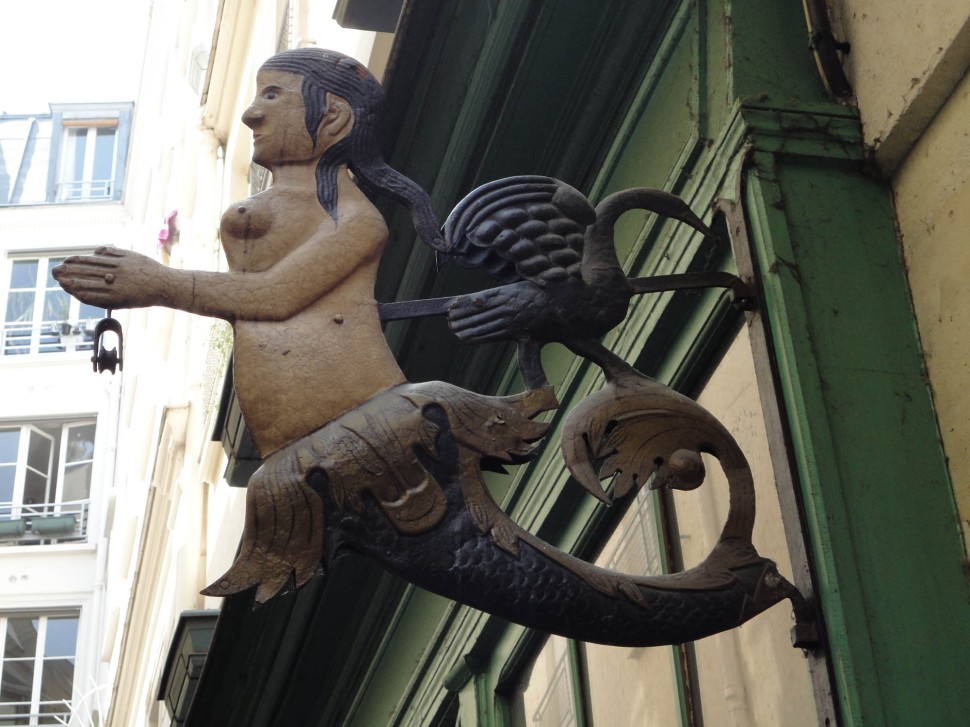 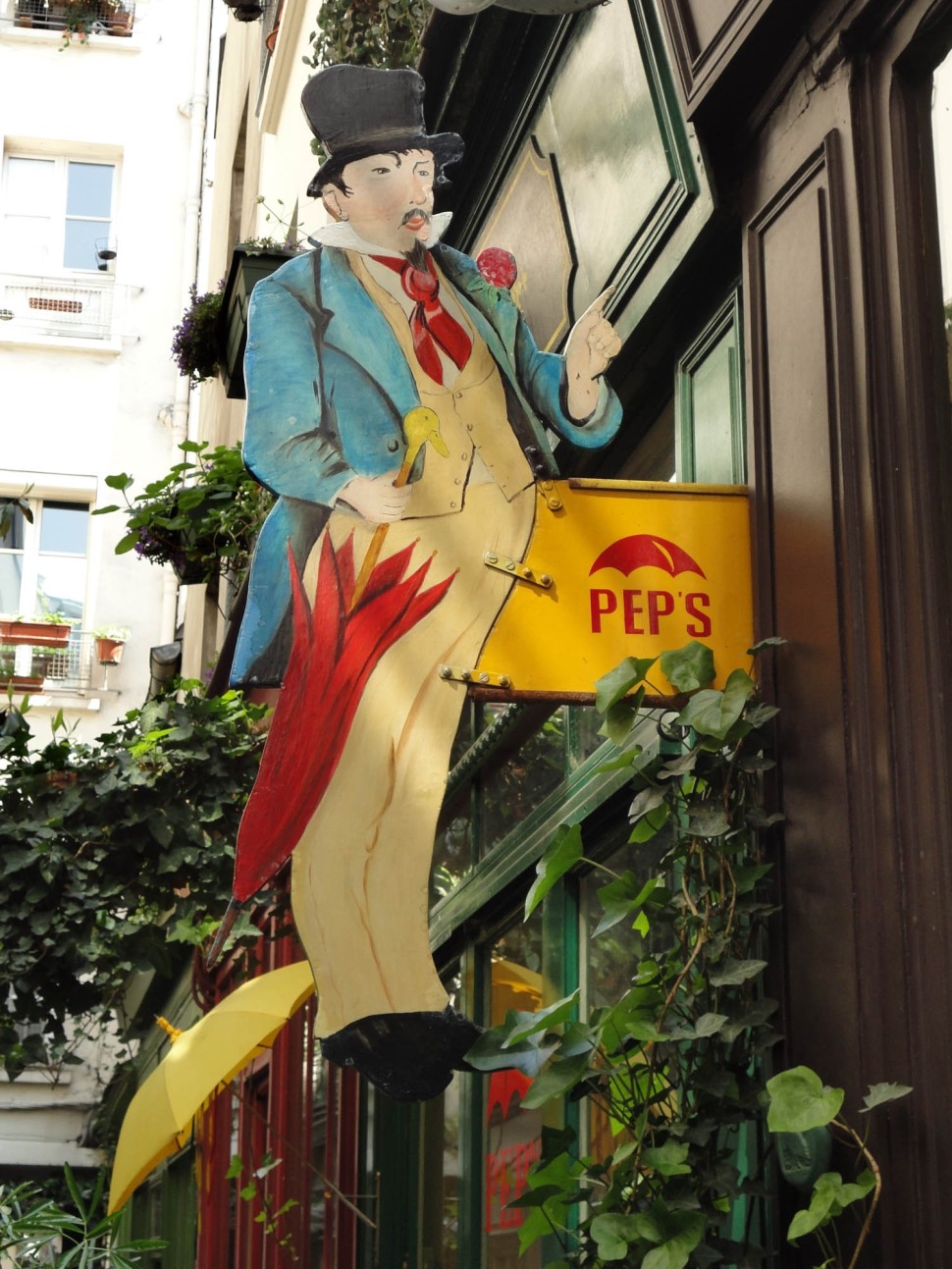 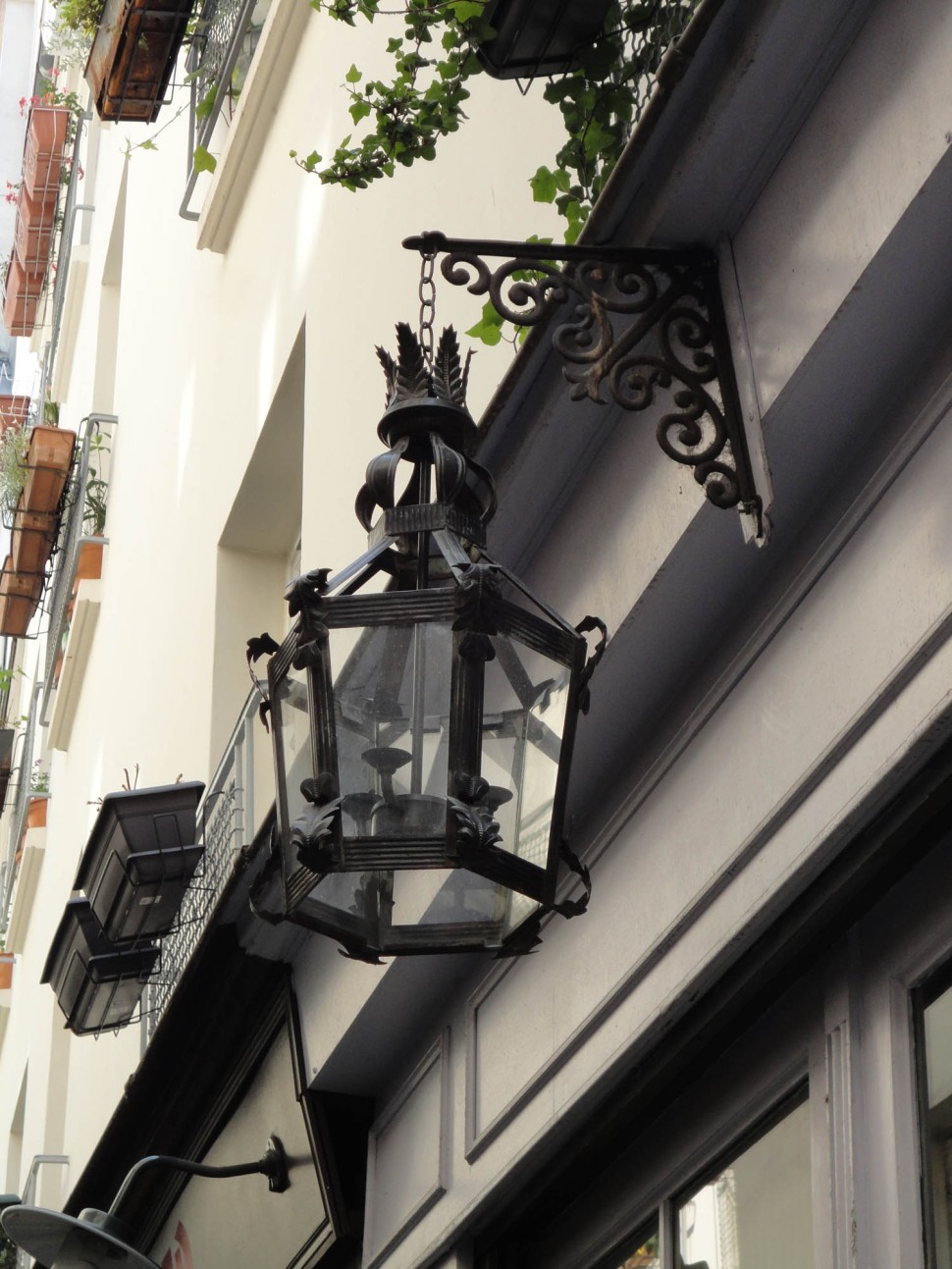 I also found a bicycle with an uber-stylish rubber mud flap. 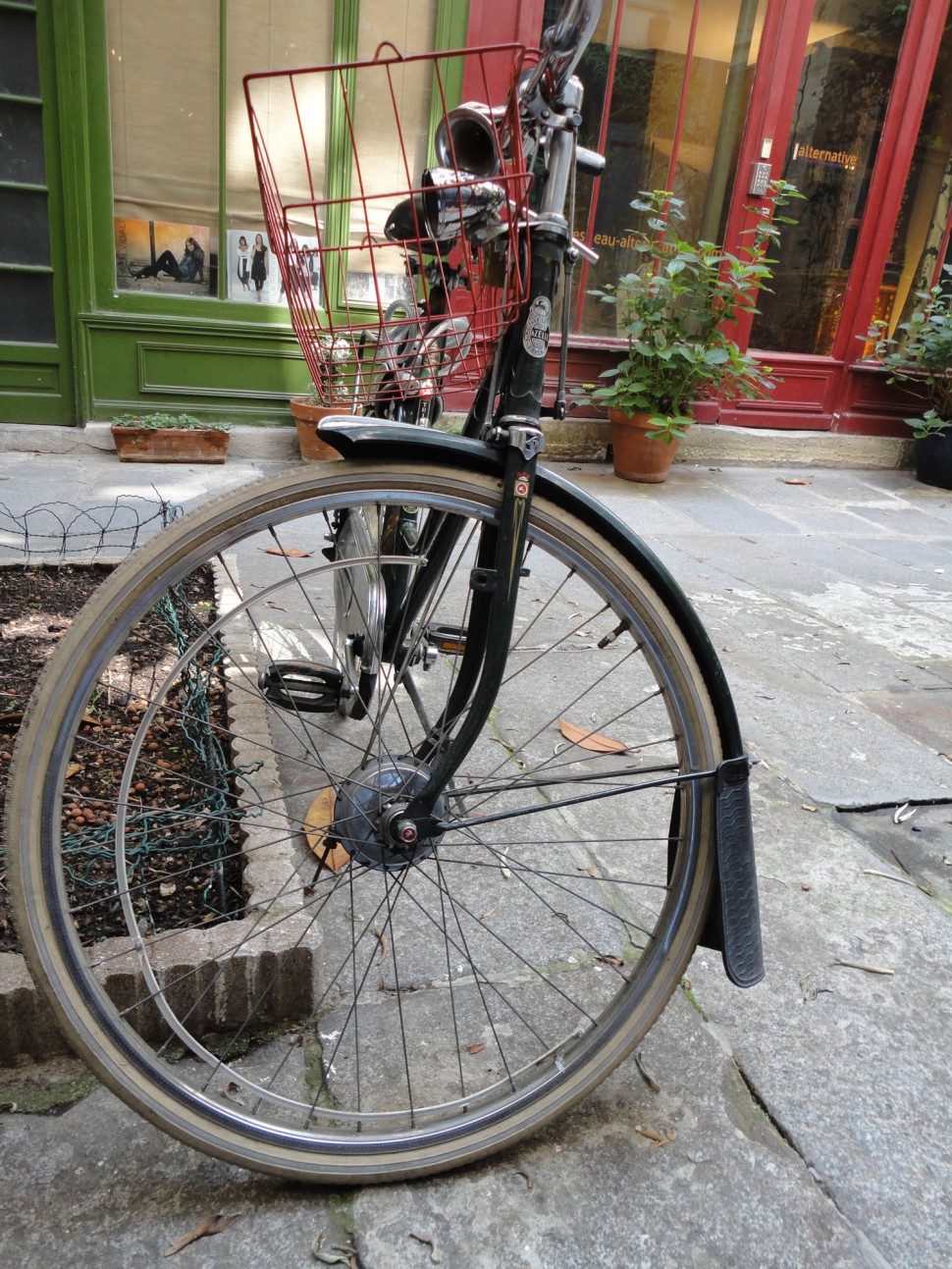 Just before arriving at the refectory there was another church, the one of Saint-Nicolas-des-Champs, and seeing as the door was open I’d be a fool to not take a peek inside, right? 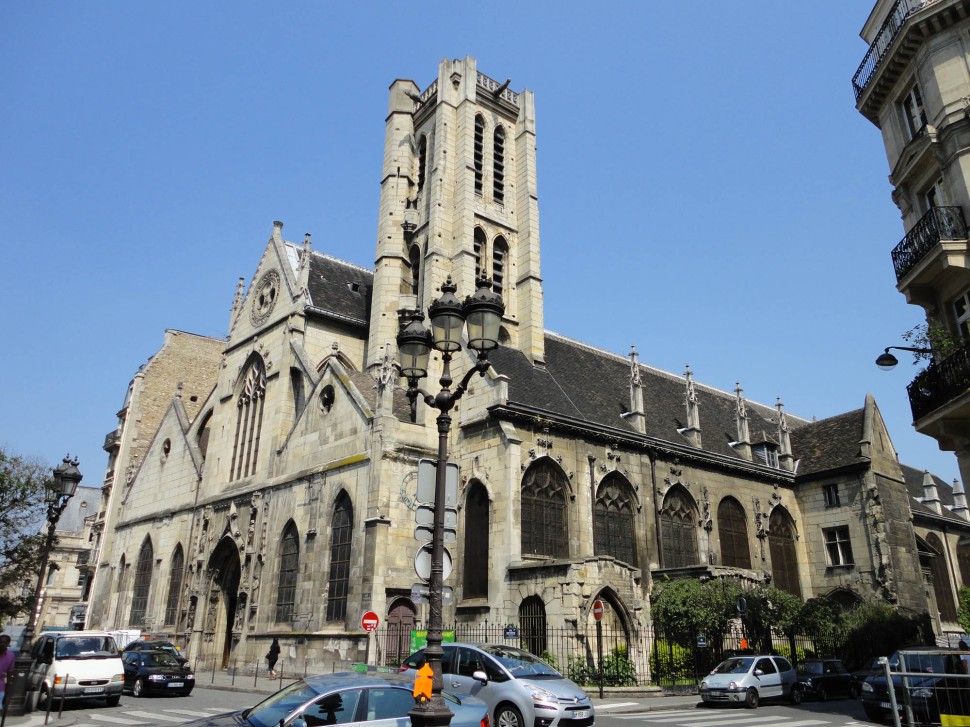 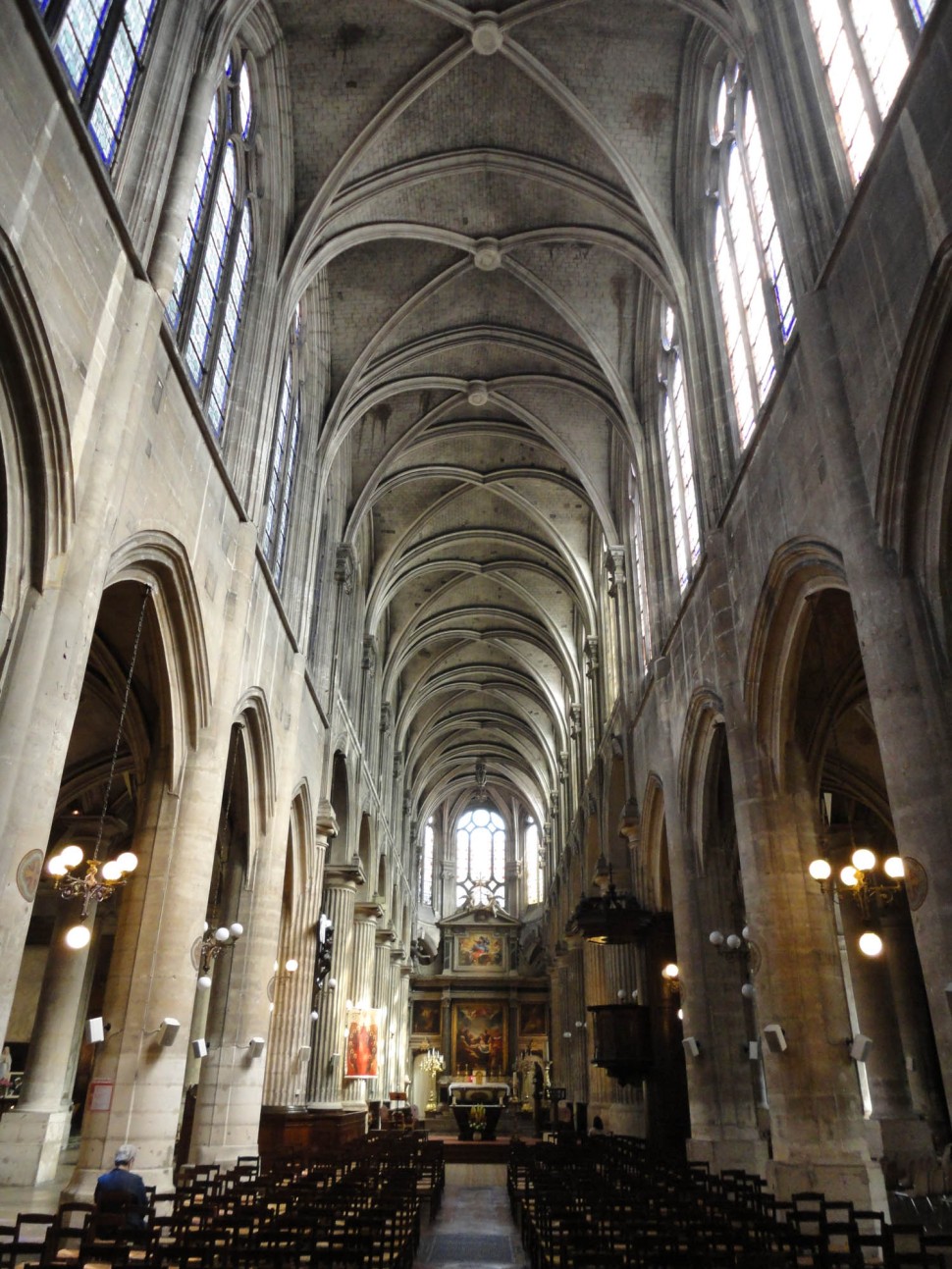 I remembered that a peculiarity of this church is that it contains exactly one hundred columns, and that each one is numbered to emphasize this feat of perfection and harmony: 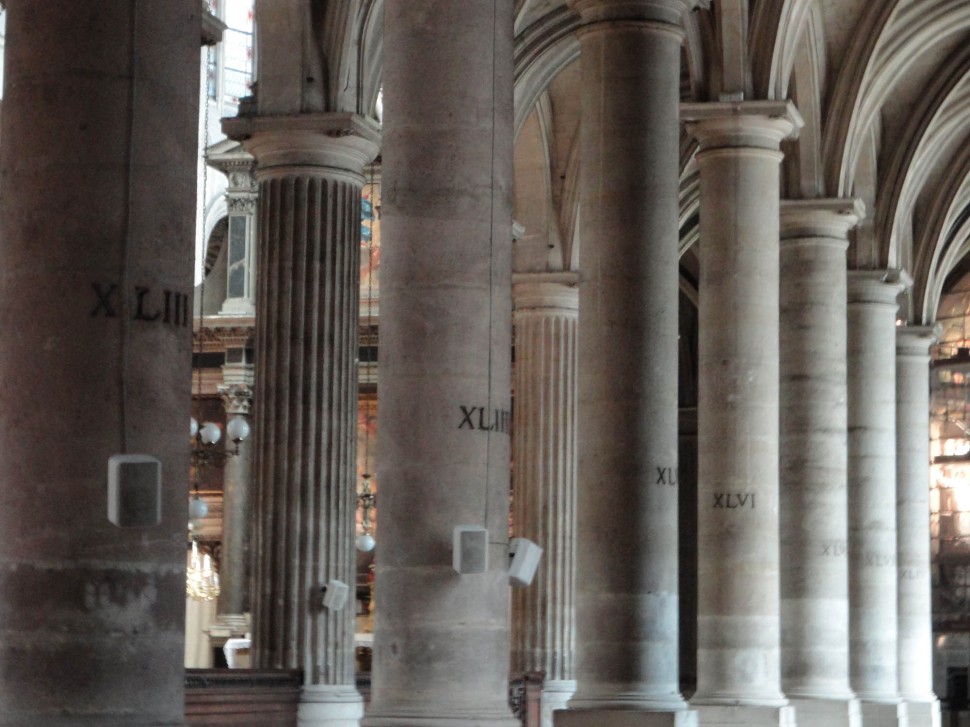 I soon discovered that this church has a slight obsession with the Holy Circumcision, as two very large paintings offer different accounts of the event (as well as two different expressions on baby J.C.’s face): 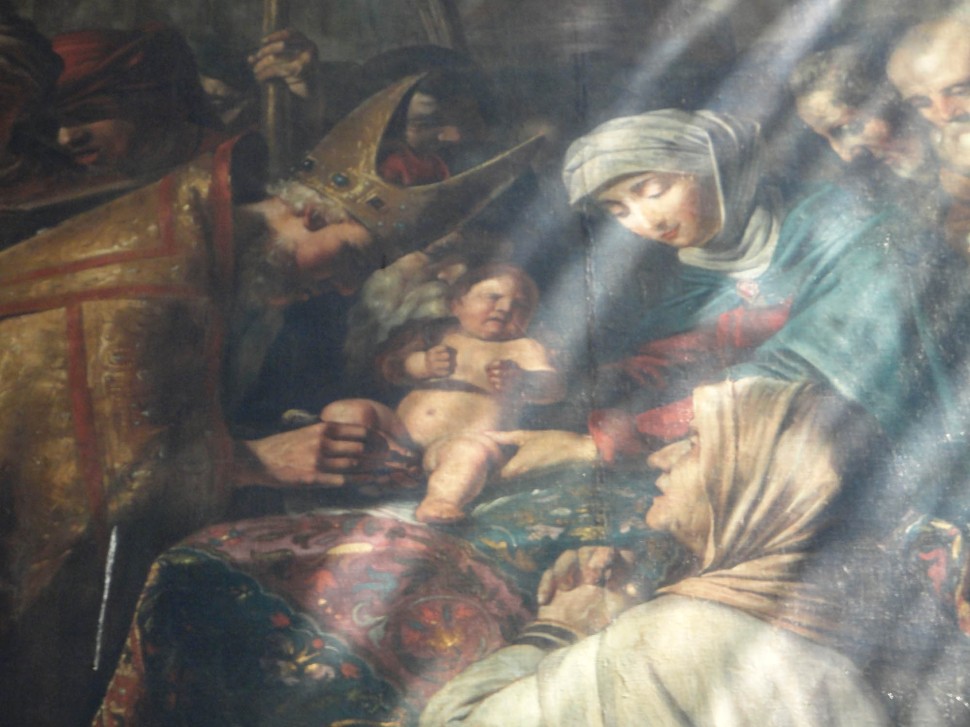 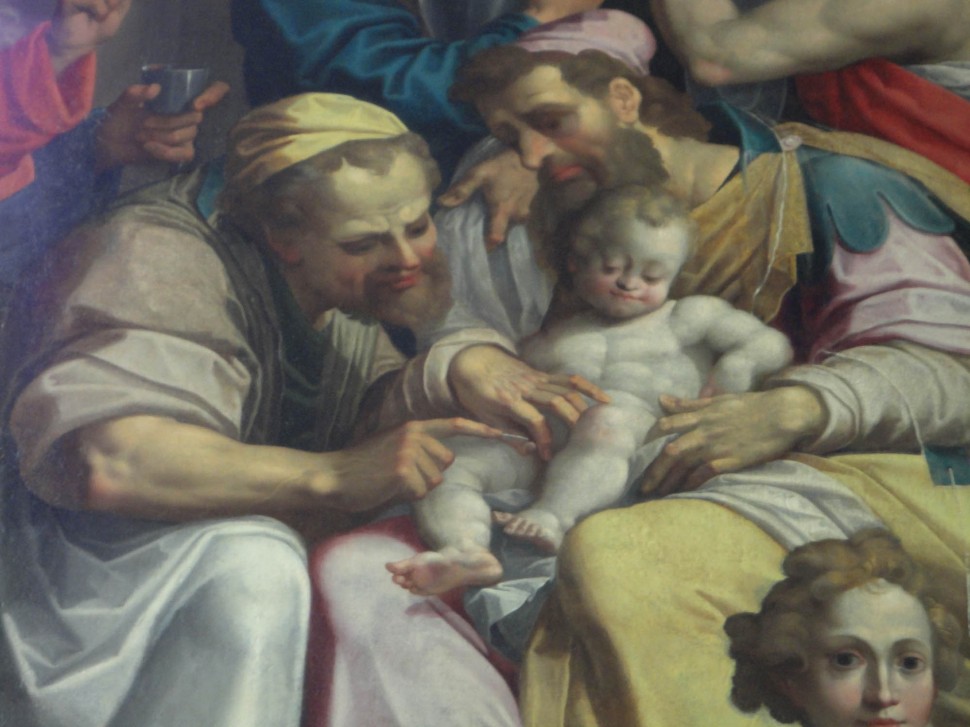 Personally the second marshmallow Jesus looks way too cool with it.

Other highlights included women on scaffolding restoring a mural, then another chapel whose floor seemed to be built of tombs or epitaphs, some gorgeous colored light filtering in from the windows, and a remarkable entryway of sculpted wood. 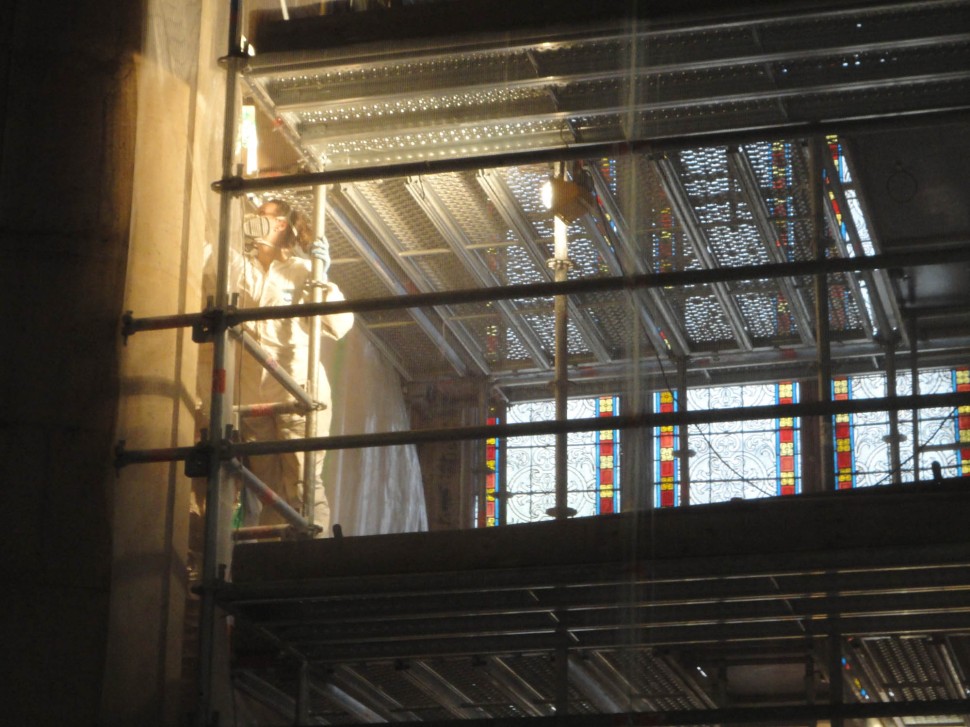 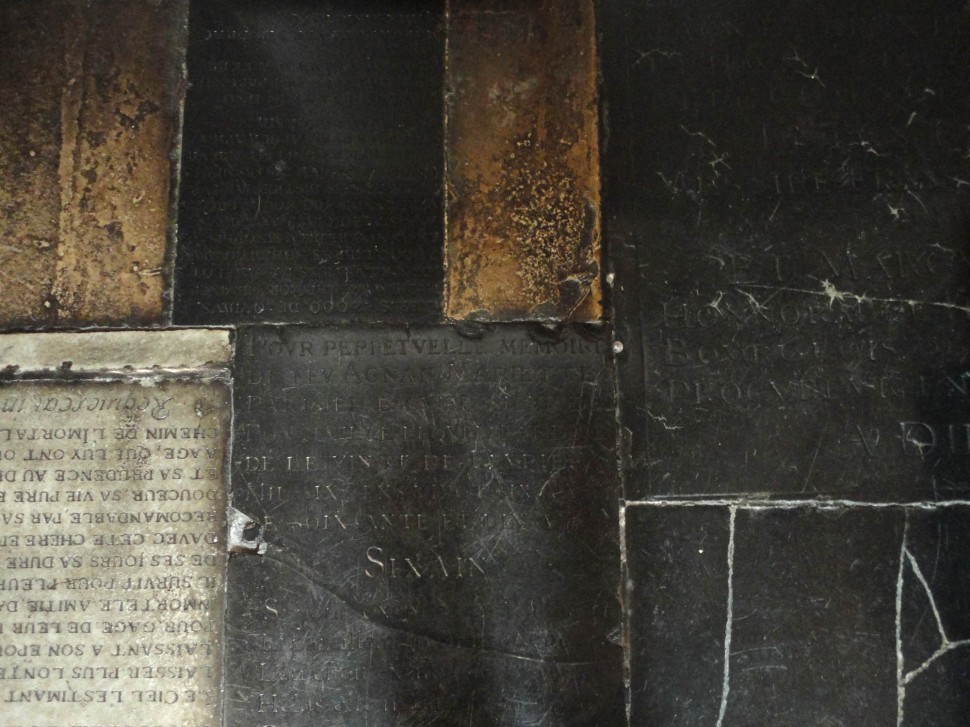 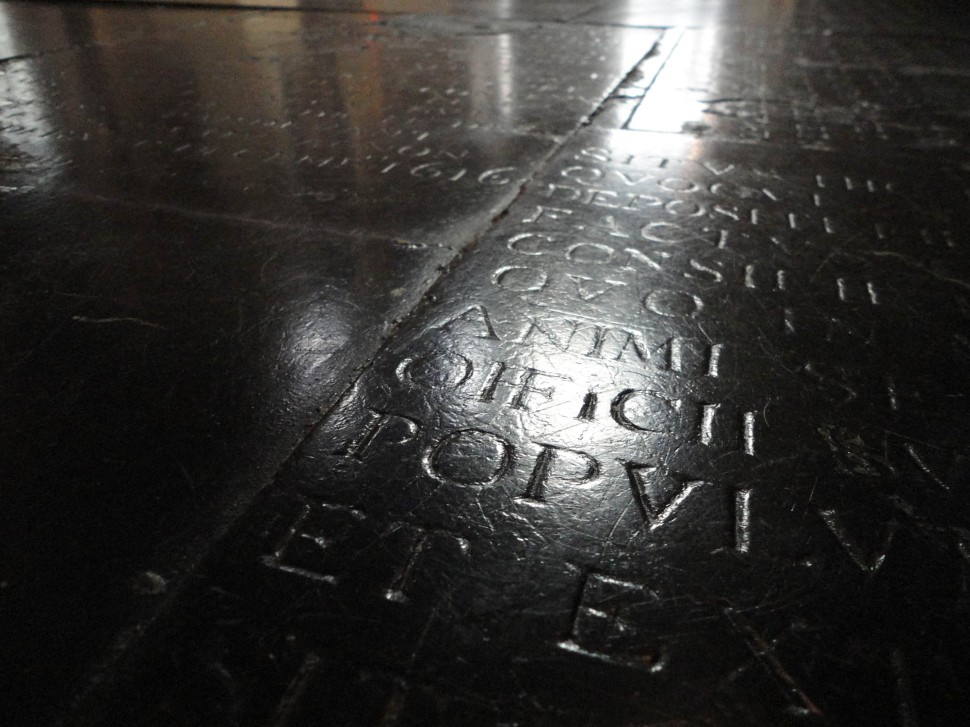 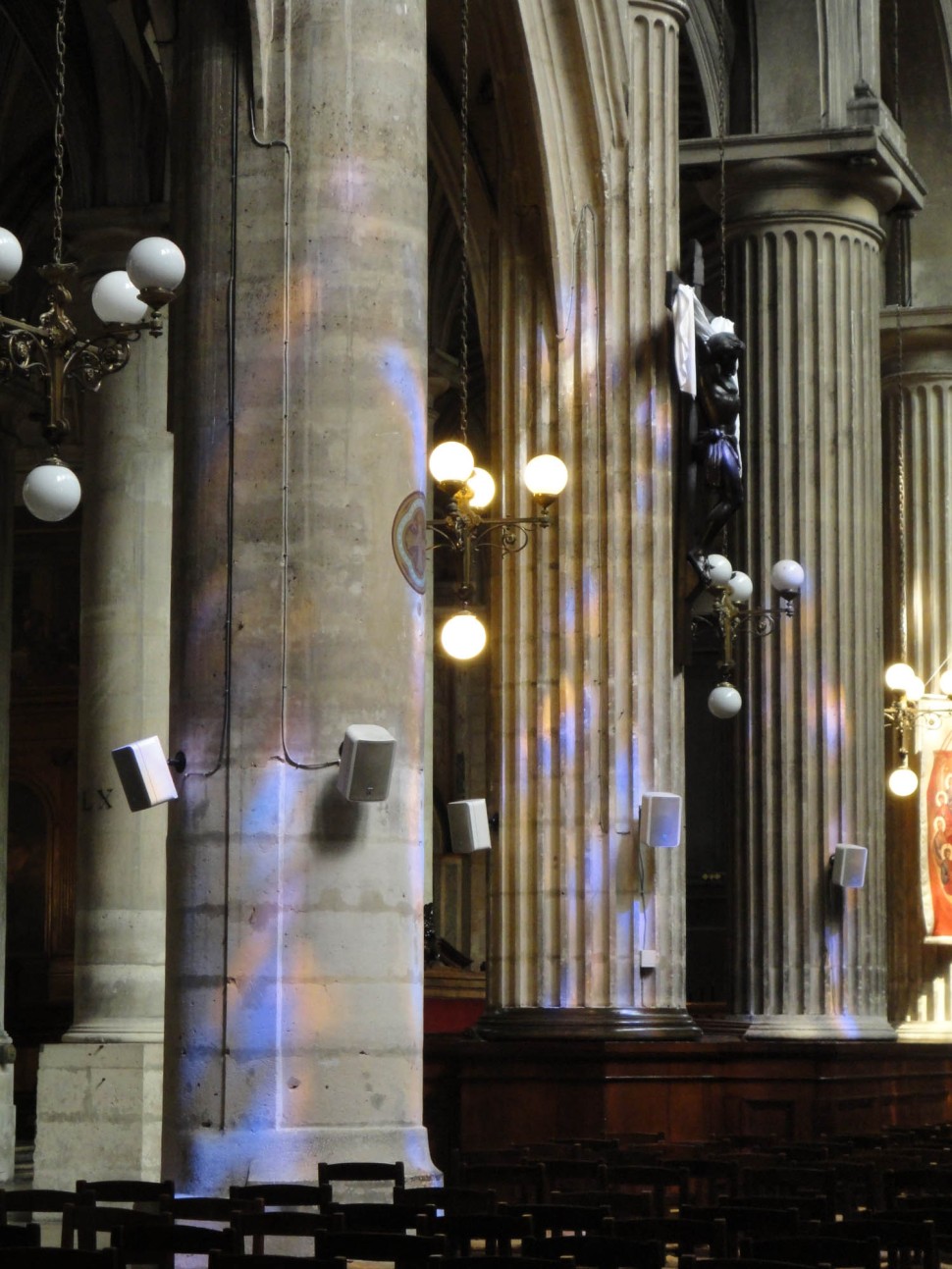 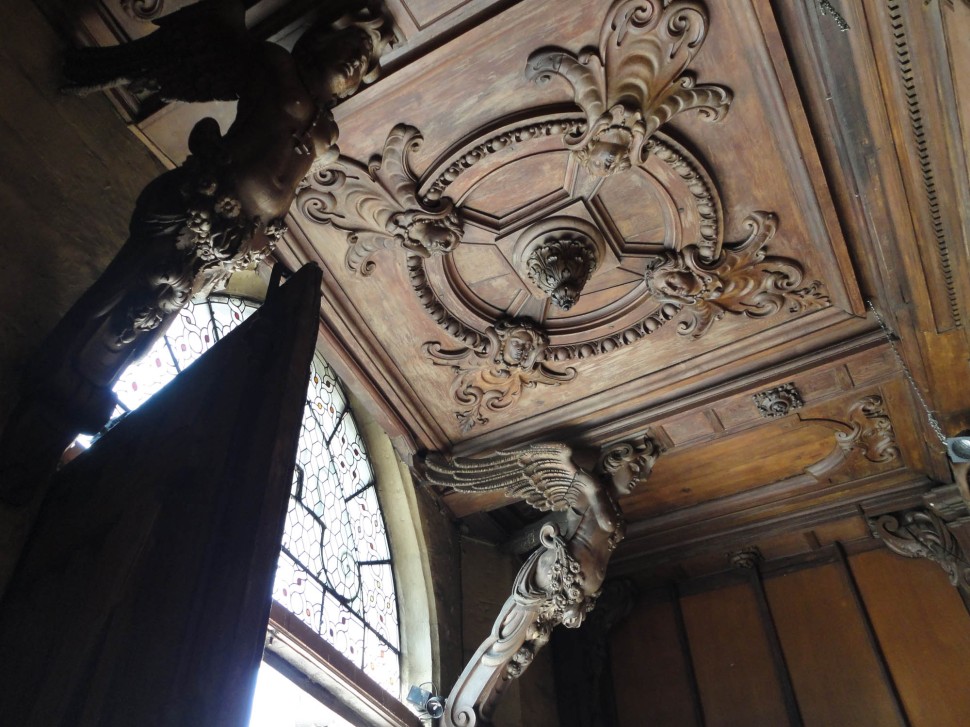 It was now time to pop across the street and finally check out the Conservatoire’s refectory/library. But even before getting there the school’s courtyard was itself quite a wondrous arrangement of ornate stone, so I had to take pause for an appreciative look around. 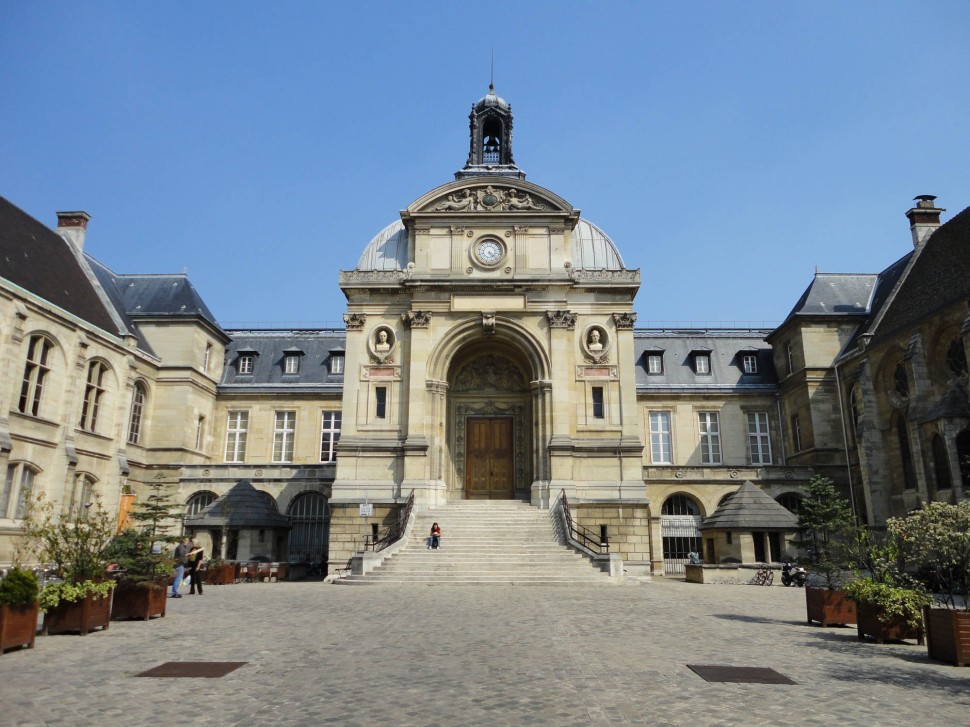 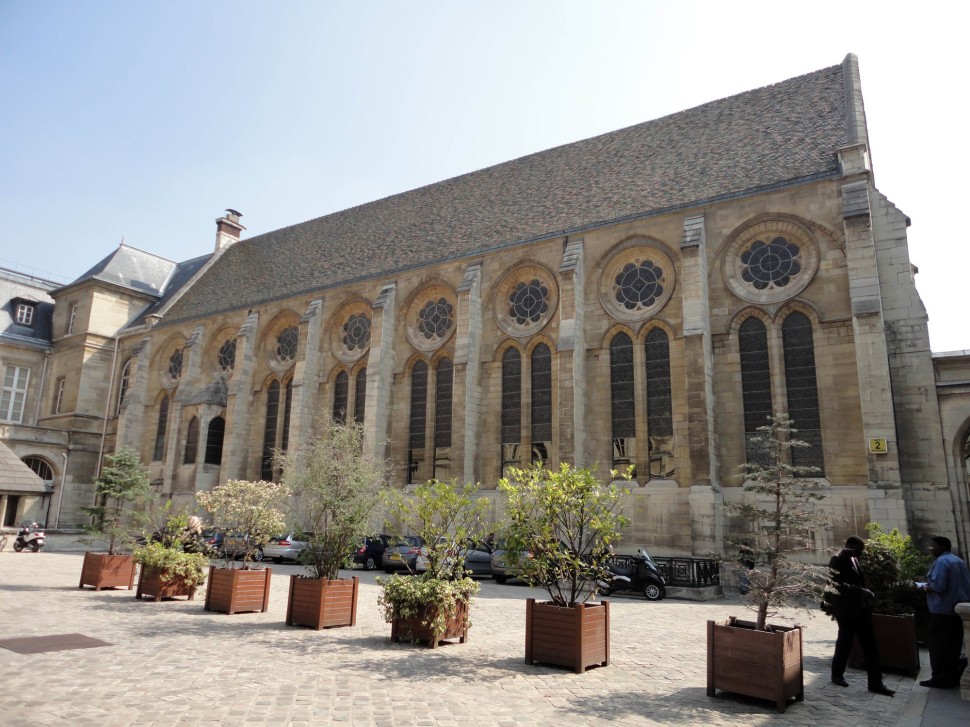 And then, at last, I was able to visit my original destination and take some gorgeous shots of the library:

Well actually…the library was a total bust. It was open but due to construction an opaque net attached 20 feet above blocked any view of that Gothic ceiling I’d planned on. I raised my camera to take a consolation photo for the sake of it, but the librarians quickly informed me that photos were forbidden and only members of the school were allowed past the desk. They were nice about it and offered some postcards of the space and a web link to more pictures, but obviously it wasn’t the same. My whole reason for this afternoon was a wash.

But how could I be disappointed, really? The library may have been the goal but the walk to get there turned out to be just as interesting, making for a day’s worth of beauty and inspiration. And that’s the point my post today–the charm is inexplicably all around you at all times, and even if you can’t see or do what you’d meant to at the start, this city has more than enough reserves to fill in the gap. And you don’t even have to work hard to find it. After five years of seeing Paris it’s a phenomenon that never ceases to amaze me, and boy I hope it never does.

Oh and I forgot: on my way to the subway, for good measure, a couple of medieval towers from 1273 and a luthier’s studio full of gorgeous violins. That’s how Paris rolls. 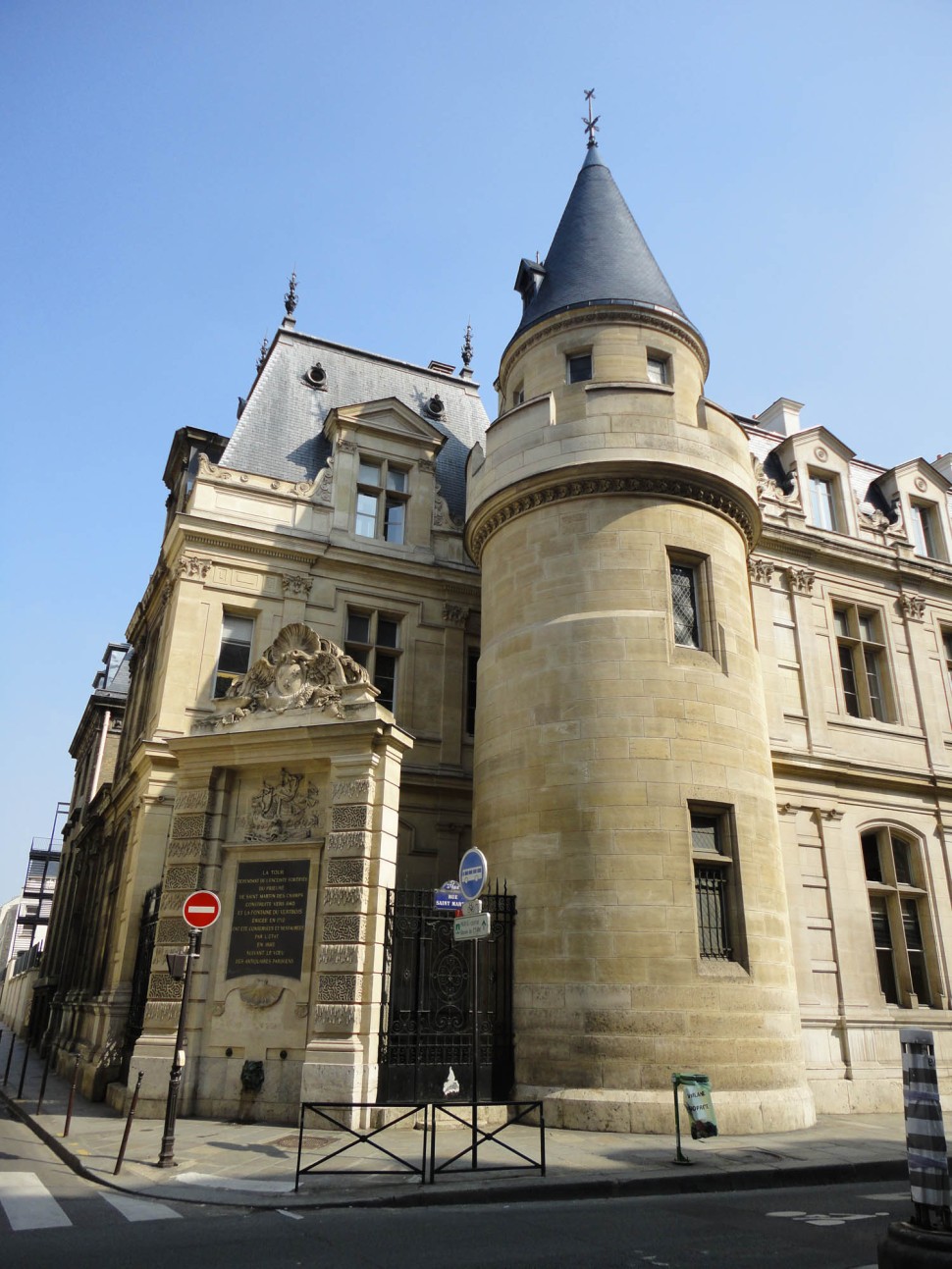 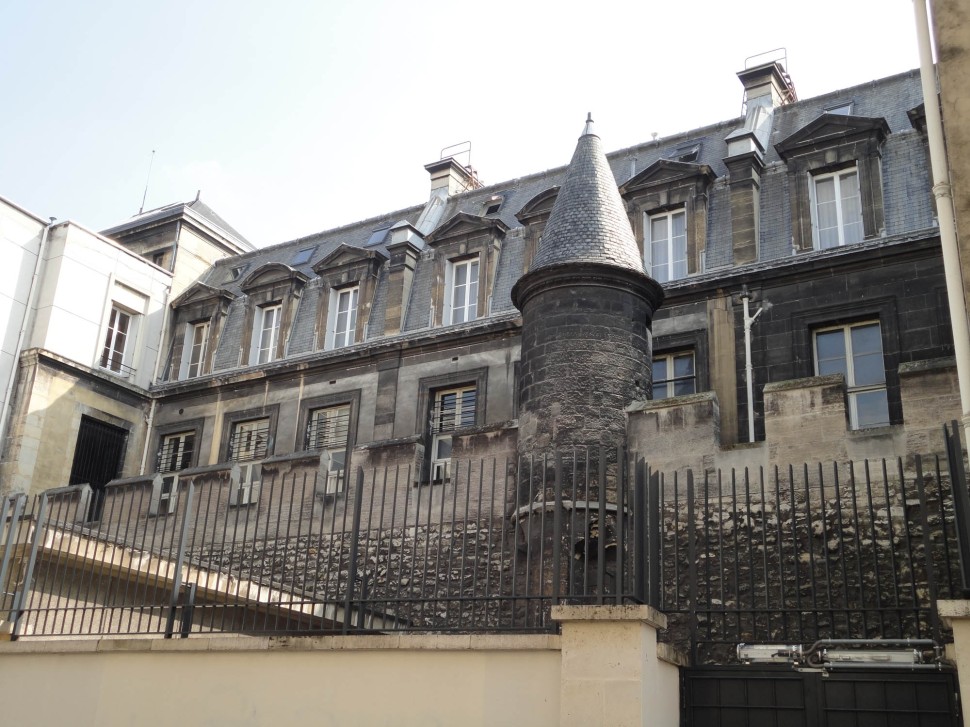 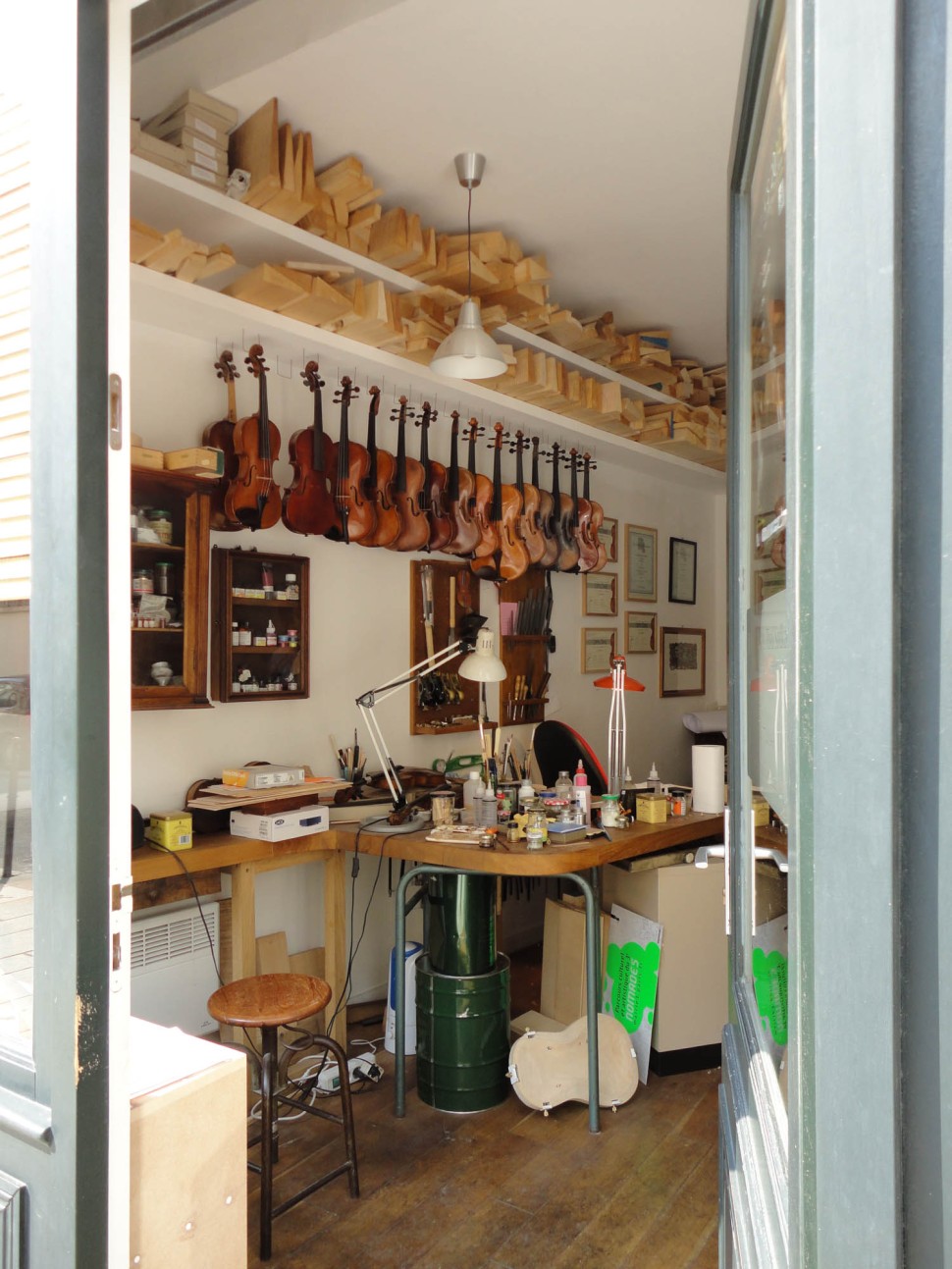