The tool in his hand looked less like a carving knife and more like the business end of an ancient warrior’s lance you might find during an archeological dig. And from what I’d learned so far about our host and the ground I was standing on, it wouldn’t surprise me if he had dug it up himself in his front yard that morning. But that was all secondary information right now. As the knife moved deliberately toward my face I was far more concerned with the morsel being presented on it, my mind racing to answer two vital questions at the last second: Do I really want to eat this, and more importantly—what the hell does l’oreille mean?

My internal translator continued to crunch the numbers but time was running out as other villagers who’d gathered around the carcass eagerly eyed me, wondering if the foreign guy had the stones to eat something freshly plucked out of this charcoal lump which had previously been, several hundreds of degrees ago, the perfectly happy head of a perfectly happy pig.

“L’oreille!” he coaxed again as my mind continued its search.

…Is he giving me the brain? No, thankfully that’s not the word for brain…crap does l’oreille mean the eyeball?…

The milky glob was now within kissing distance of my lips and looking much gooier now, with a blackened sooty crust on one side. Jeez I’d already been fighting a huge headache as it was, and with several hours ahead of hardcore eating and partying in a warm crowded room of strangers, did I really want to tempt the fate of the evening by ingesting a yet unidentified nugget of swine corpse?

I took stock of the situation: I was hours from Paris in a rural village somewhere in the middle of France. I was standing inside a stone-walled 15th century manor next to an ancient wood-fire oven that’s been feeding farmers since the Middle Ages. I was spending the night on a stunning medieval property surrounded by a vineyard and apple orchard to one side, an Italian-inspired vegetable garden to the other, and rolling mounds of moonlit country landscape as far as my wide eyes could see. And now the owner of it all—the patriarch of this dreamy place—was personally offering me his favorite part of the evening’s gastronomical centerpiece which he’d been patiently coddling all afternoon. Headache be damned—I wasn’t going to let an opportunity like that slip through my fingers.

I slurped the morsel into my mouth and it instantly melted in a torrent of smoky salty goodness. Arriving better late than never, my internal translator finally locked in on its target.

A bit bizarre maybe, but a welcomed alternative to my first couple of guesses. And at this point it was on its way down the hatch regardless of the translation. My mouth was experiencing what happens to cartilage after it’s been softened by half a day’s slow roasting next to cherry-red coals, and while I’d expected to be eating more torso meat than floppy appendages, spending this behind-the-scenes moment with the master of the house was one of the best appetizers I’ve ever had.

Earlier that day while packing for this trip I didn’t know much at all about where we were headed. I knew it was a party for our friends who were recently PACS’d (a civil union in France for those not interested in marriage), and I’d gleaned that the parents of the groom were hosting it in their summer home which Charlotte described only as “very old, and maybe they’ll give us a tour”. We would spend the night there and head out the following afternoon. There was also talk about something on the dinner menu called a cochon de lait, a young milk-fed piglet roasted whole on a fire. Little did I know I’d be savoring its auditory lobes at the other end of this car ride.

Four hours and a hundred farming pastures later we were winding our way into a miniscule town called Villeneuve, which can be translated as “New City” (laughable considering it looked virtually untouched by the last few centuries). The first glimpse of the parent’s house gave all of us the same awe-struck reaction, mostly because we couldn’t see the house at all—instead you enter by a private tree-lined road leading to what essentially was a castle entrance. Despite the beginnings of a headache I also felt a tingle of anticipation. Our friend’s parents didn’t own a simple country home—this was a freakin’ estate, and by the looks of it exactly my kind of vibe.

The pointed archway of the entrance opened into the property’s large interior. A square green garden anchored the center of the open space with its precise layout of grass and shrubbery in the classic French style. It was surrounded on all sides by a circular gravel driveway and then a collection of old stone buildings that had clearly been around for a long, long time. As we entered people were filtering outside from another building to nibble and drink the apéro, so we made our way over and cheek-kissed our way through a crowd of mostly unknowns. After being introduced to our friend’s parents who owned the place, I pulled Charlotte away to get my head some much-needed fresh air and my eyes a better look at what the rest of the grounds had in store. 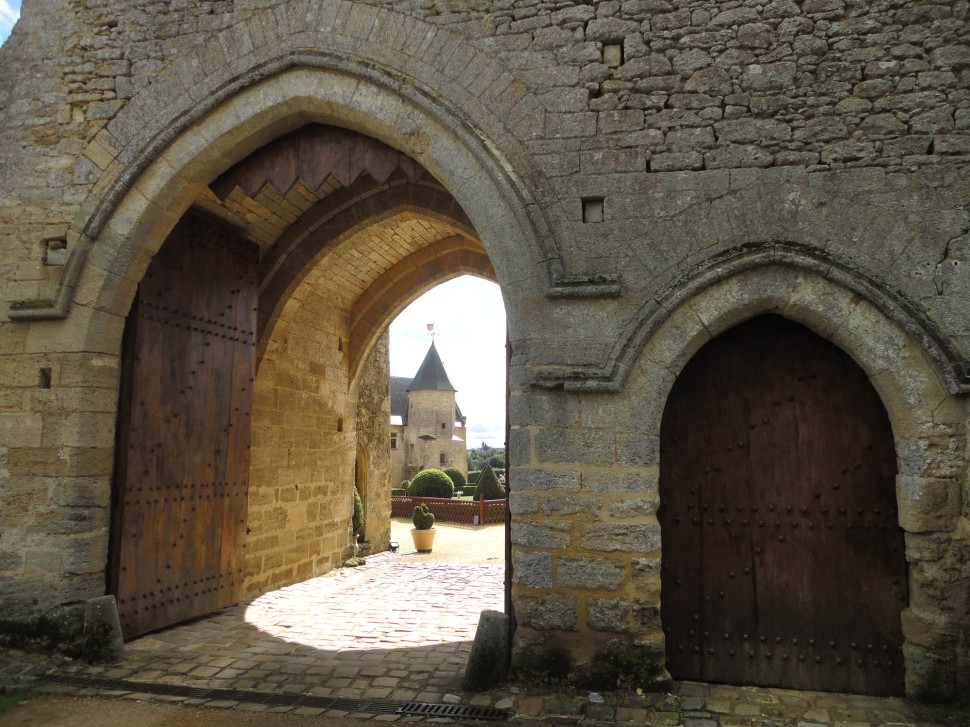 If I’d known ahead of time I was destined to spend my weekend here I would’ve been excited enough, but having it fall into my lap as a surprise at the last minute magnified the sensation of being plucked from the real world and dropped into my happy place. Everything was built out of heavy, weather-worn medieval stone that seemed to ooze historical significance at every turn. We learned later that the owners have been painstakingly restoring the property for the last 25 years, resulting in fantastic spaces to wander off and lose yourself in quietude like the meticulously designed vegetable garden with accompanying lover’s benches, gurgling fountain, sculpted shrubs, and of course a small garden labyrinth for good measure. 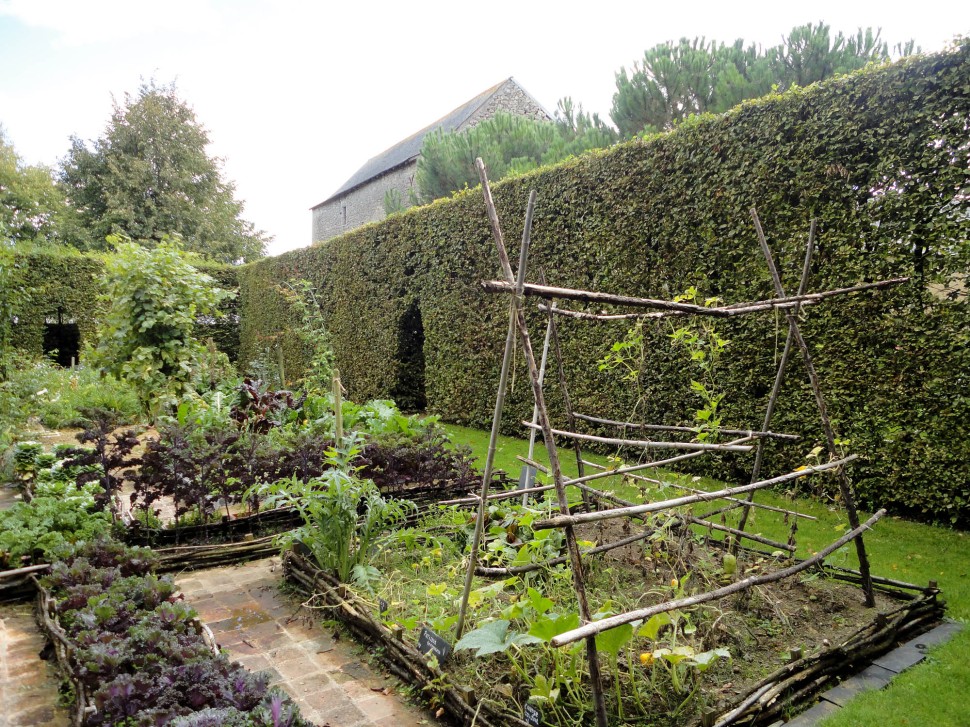 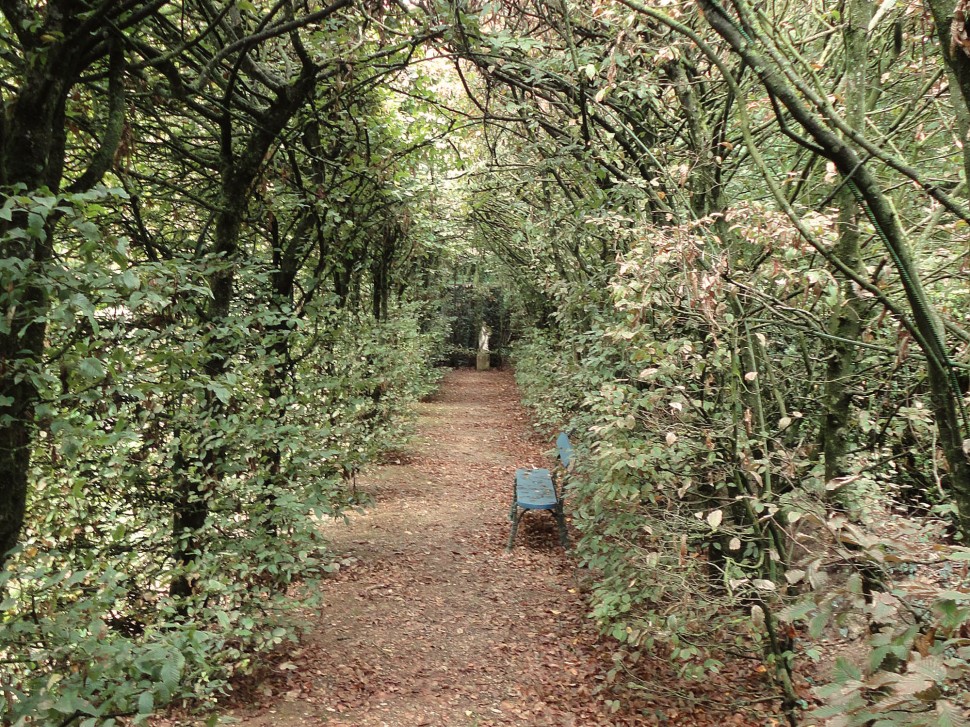 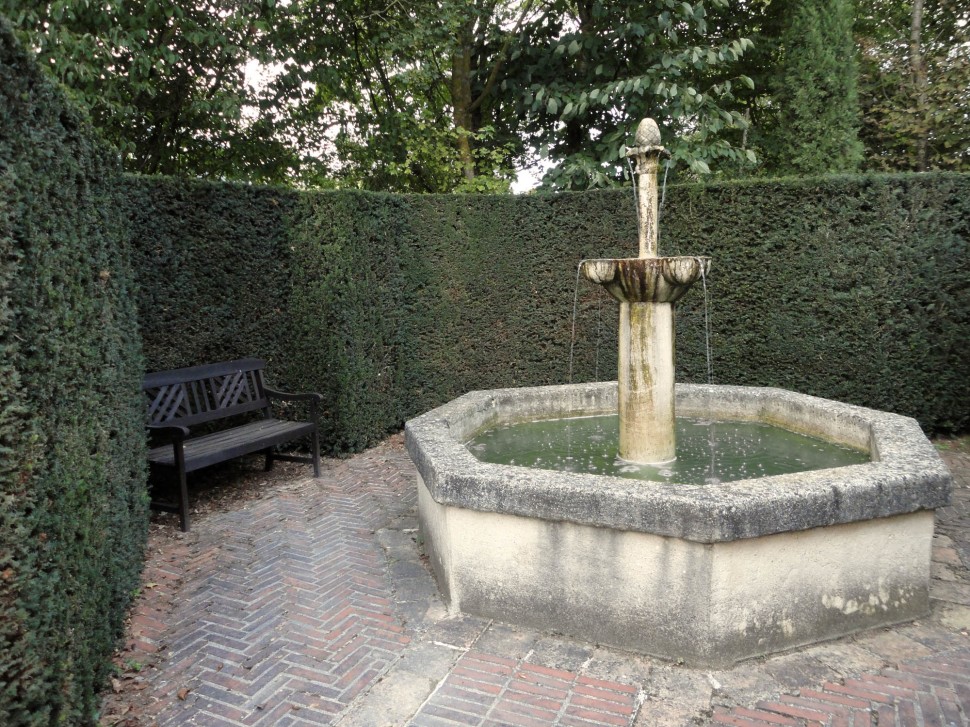 The break from the crowd helped to ease the pain in my head, and I have to assume the shot of endorphins I got walking through this stuff played a part as well. We rejoined the group temporarily but I couldn’t stop myself from wandering off again to explore. I worked my way into another building of the complex, a large structure just as solid and castle-like as the rest but with a more lived-in feel. This is where the family resides while they renovate the main building which they’ll move into in 2013. But for now they’re forced to slum it, and by slum it I mean putting up with a charming multi-level cottage. 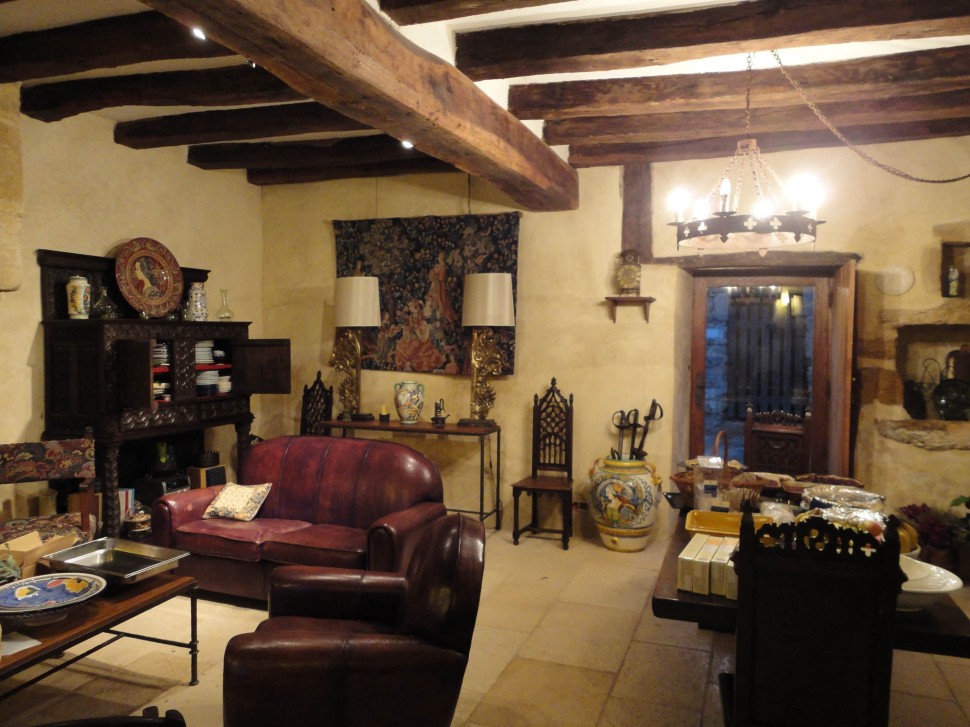 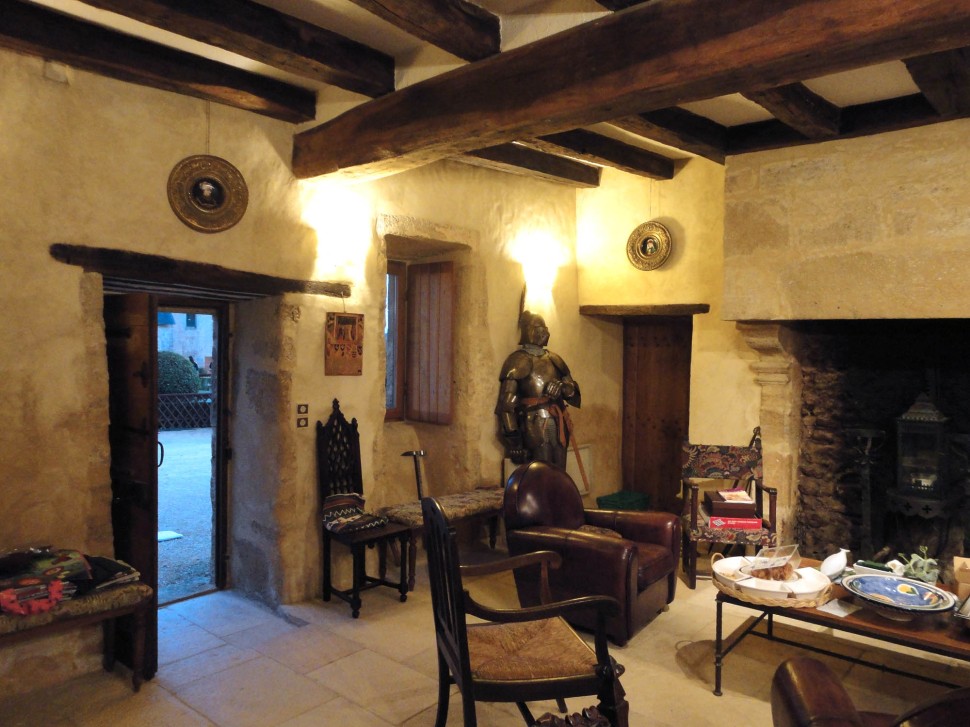 This place was starting to feel like the kind of historical landmark you’d pay an admission fee for, and I learned later that’s exactly what happens—4.50€ if you’re a tourist during normal hours. But tonight I had free reign; I had an in with the owners of the joint and I was taking full advantage.

In keeping with the French rhythm of life the preliminary apéro outside lasted a good two hours before the fifty of us shuffled into the main building for dinner. More pointed arches and a spiral stone staircase at its entrance reminded us we were stepping back in time, 1350-1450 to be more exact. We sat down to bottles of water and wine and various appetizers as a video montage of our friends was projected on the wall. Still fending off my head pain I eventually popped outside again for air, only to be attracted back into the building by another lit door further down the courtyard. It was good timing on my part as I came across the father in front of a recessed brick oven as he pulled out the evening’s main course. Being un-furnished the room was lit dramatically by a large flood light off to the side giving everything the intensity and stateliness of a Caravaggio painting. I watched as he finished carving the pig and turned his attention to its head, and then to me, and…well you know the rest of that story. 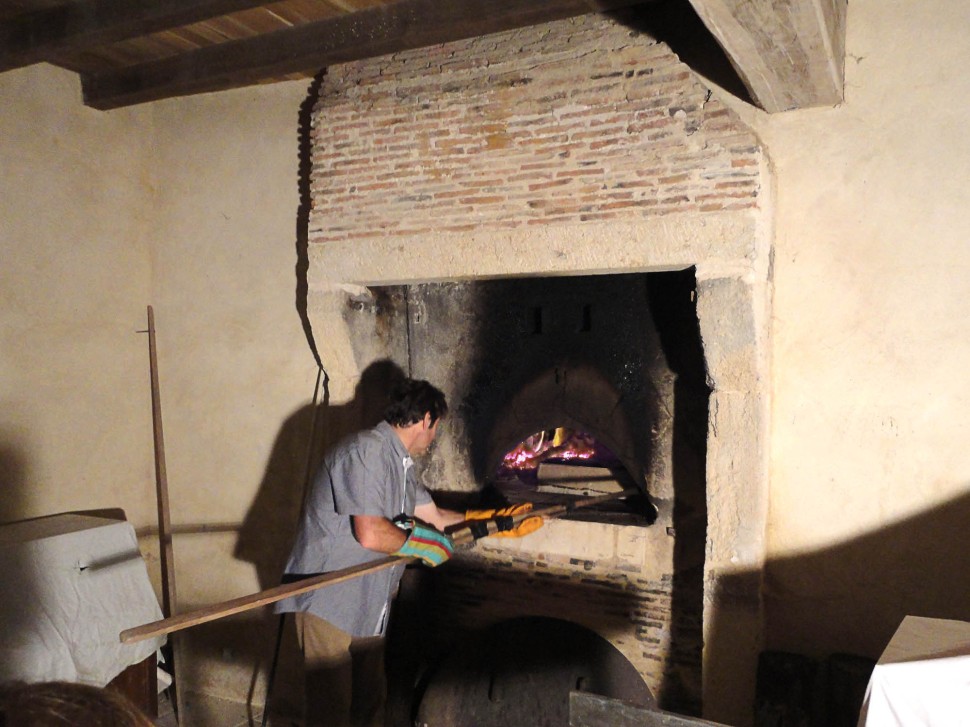 Dinner continued long into the night as you’d expect, the pig arriving in chunks for the main course accompanied by a ratatouille and baked potatoes covered with crème fraiche and chives. We paused for occasional activities, including some of Charlotte’s custom table games followed by someone bringing in their sax for a solo rendition of a jazz tune. Empty wine bottles magically turned into full ones: sometimes red, sometimes white, sometimes bubbly—but always local. I think I heard something about one being from right next door, which seemed perfectly logical. Unfortunately my health kept me out of the wine game but it was fun to watch nonetheless. At one point I turned to my right to find the owner perched at the head of a large table, red-faced with alcohol and contentment, staring down at the charred pig’s head on his plate the way a schoolboy looks at an ice cream truck.

This was remarkable; I had already seen so much I hadn’t planned on, and dinner was only half over. Well half over by US standards; in reality things were just getting started.