We arrived when this party started, around 7:30pm. Dessert? One-fifteen in the morning. Nobody was in a hurry to move things along, and why would they be? This stuff isn’t an addition to their lives, this is life. The owners haven’t spent 25 years busting their derrières on this property to not share it with copious amounts of friends and family. Part of me wonders if that’s the sole reason they do it. As 3:00 rolled around and tables were pushed aside for a makeshift dance floor, our eyes wouldn’t stay open any longer and it was time to call it a night.

We crossed the courtyard into the other building and mounted a very cool old staircase up to an attic area with high timbered ceilings and various mattresses spread about for other partygoers spending the night. In the second picture, a small iron-barred window under the roof marks our lodgings for the night. 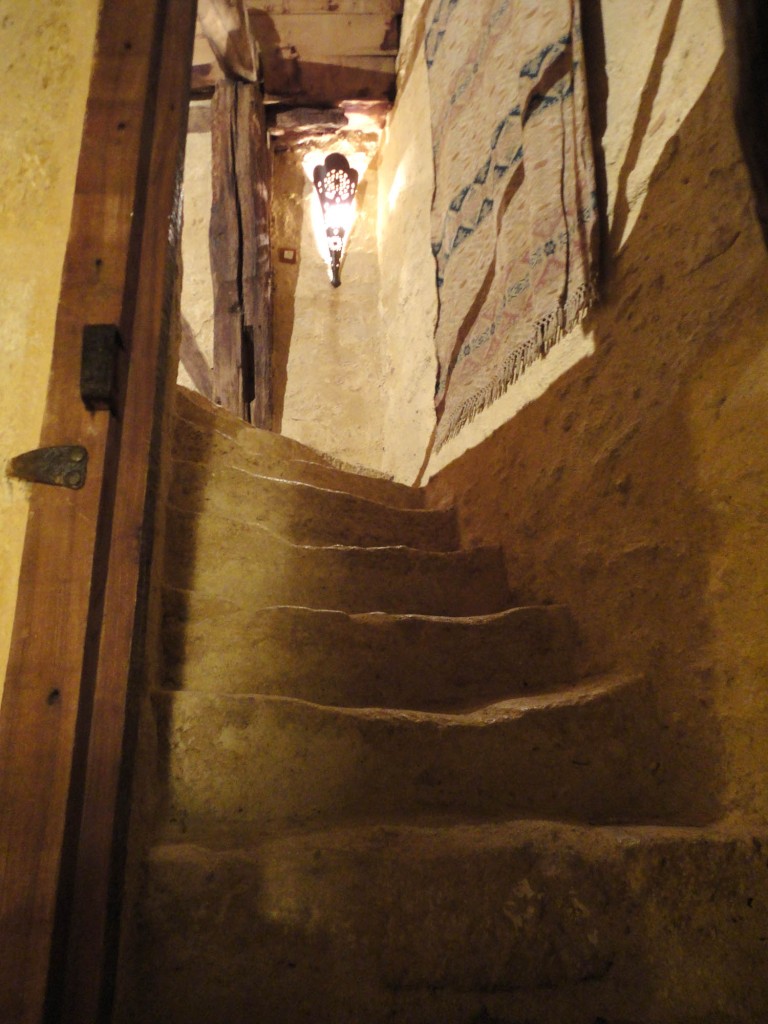 The next morning we shuffled down into the living room to meet a dozen now-familiar faces chatting over bread, fruit, chocolate muffins, Nutella and coffee. As usual, people were more willing to approach the foreigner on the second day, asking me where I’m from and what I think of their culture. The mother and I exchanged war stories about speaking a second language, French for me and Italian on her end. Although we were scheduled to drive home soon after, I think Charlotte understood our original plan was busted as soon as the mother offered to give us a tour of the grounds in the afternoon.

We ended up back in the building where the party had taken place, being led through each room of each floor with interesting explanations spanning from “this doorway is original and 600 years old,” to “this is how our state-of-the-art geothermal heating system will work”. It was a funny blend of old world charm with the necessities and comforts of 21st century living—a newly installed toilet sits just yards from the old hole where originally you would’ve hung your ass out into the cold winter air to crap onto your backyard. Disney tends to leave that part out of their castle fantasy flicks.

We saw the beginnings of the family’s future bedrooms, each one empty except for a huge existing fireplace which gave the impression that not a whole lot more furniture was needed (for me anyway). After hearing that one of the spaces is the future guest room I was already daydreaming about getting cozier with these folks and gobbling up a slot for the summer of 2013. The mom seemed as enthusiastic giving the tour as if had been her first time, and all of those good vibes bouncing off the stone walls made me want to move in that evening, renovated or not, modern toilet or medieval hole onto the backyard—we’ll take it!

As a finishing hoorah to our short weekend visit we couldn’t have asked for more than this private walk-through by the owner. But wait—how can you pack up the car when they’ve just announced make-your-own pizzas cooked in the stone oven? I felt like being on an all-inclusive couple’s retreat with cool activities carefully planned throughout the day to avoid breaking the spell of the weekend. Again our exit plans were postponed as we grabbed fistfuls of homemade dough and went to town, the father whipping the pizza paddle in and out of the oven like it wasn’t his first time. Olives, cheeses, ham, bacon, and copious amounts of fresh herbs were available. In all the hubbub my pie got shoved in prematurely with only a fraction of what I wanted, but show me a man who complains about a wood-fired pizza in a medieval oven and I’ll show you…well, the opposite of that. 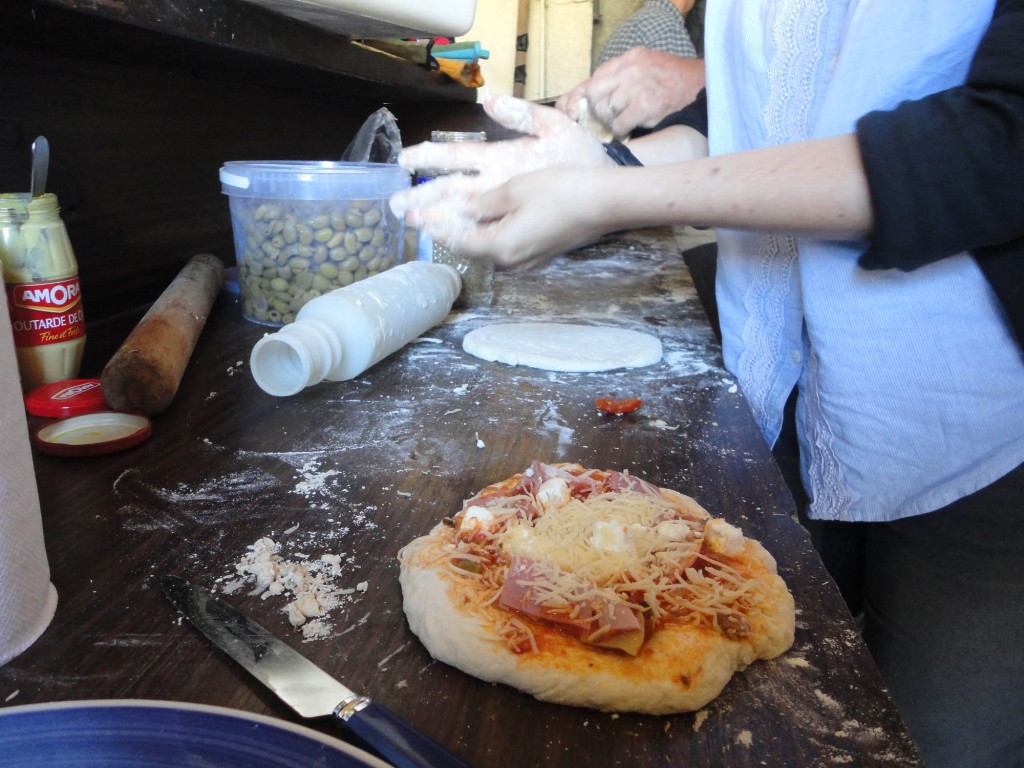 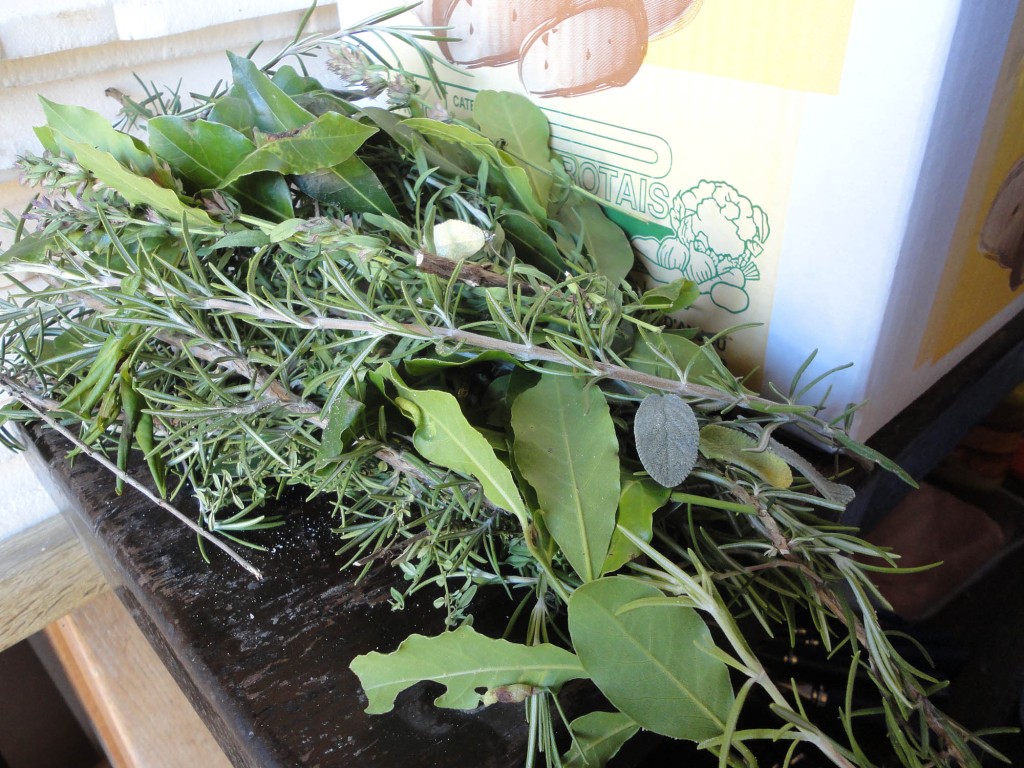 Now we really needed to get going. Before saying goodbye Charlotte and I took one final walk around the property in case we’d missed anything cool. And of course, we had. 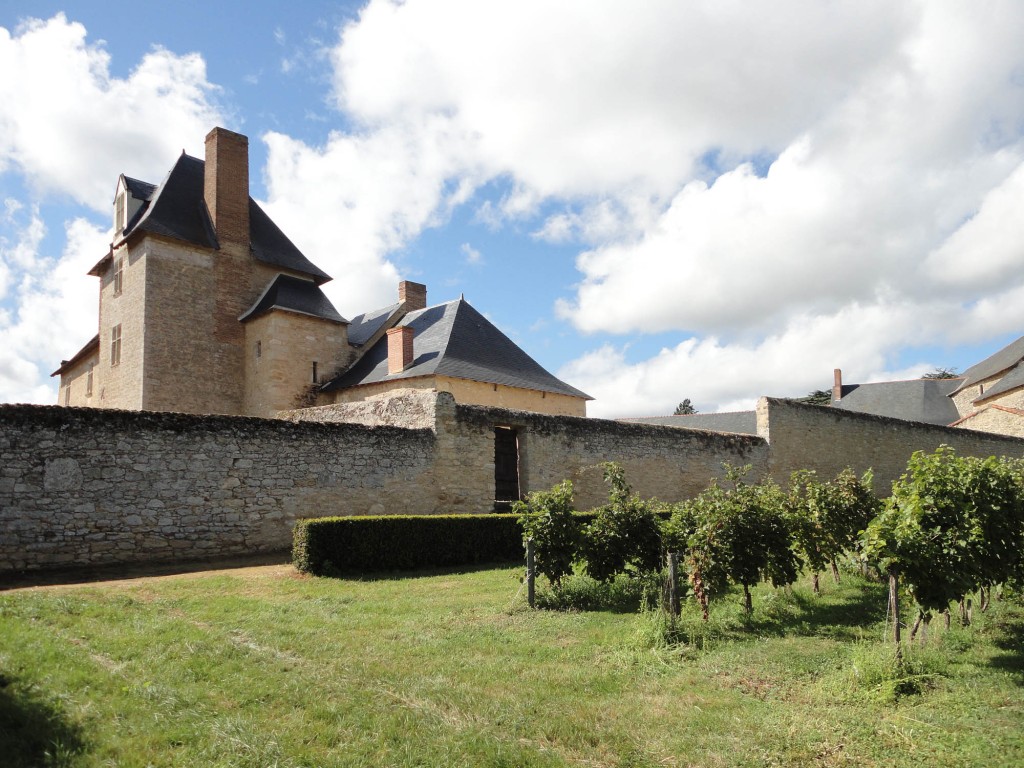 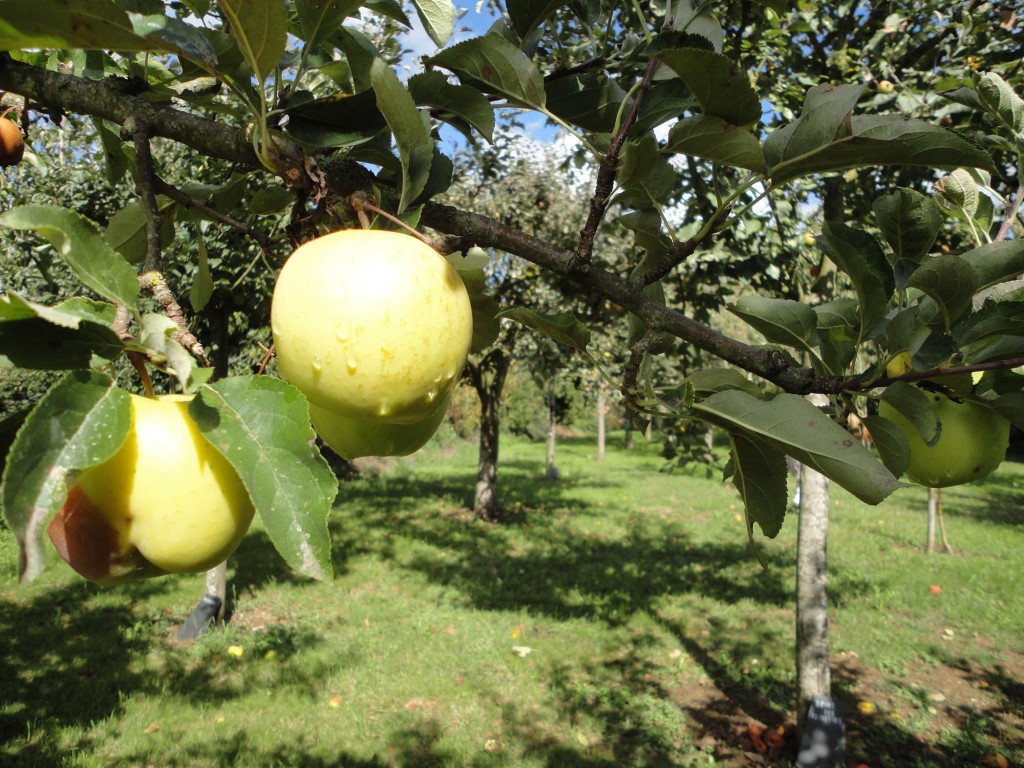 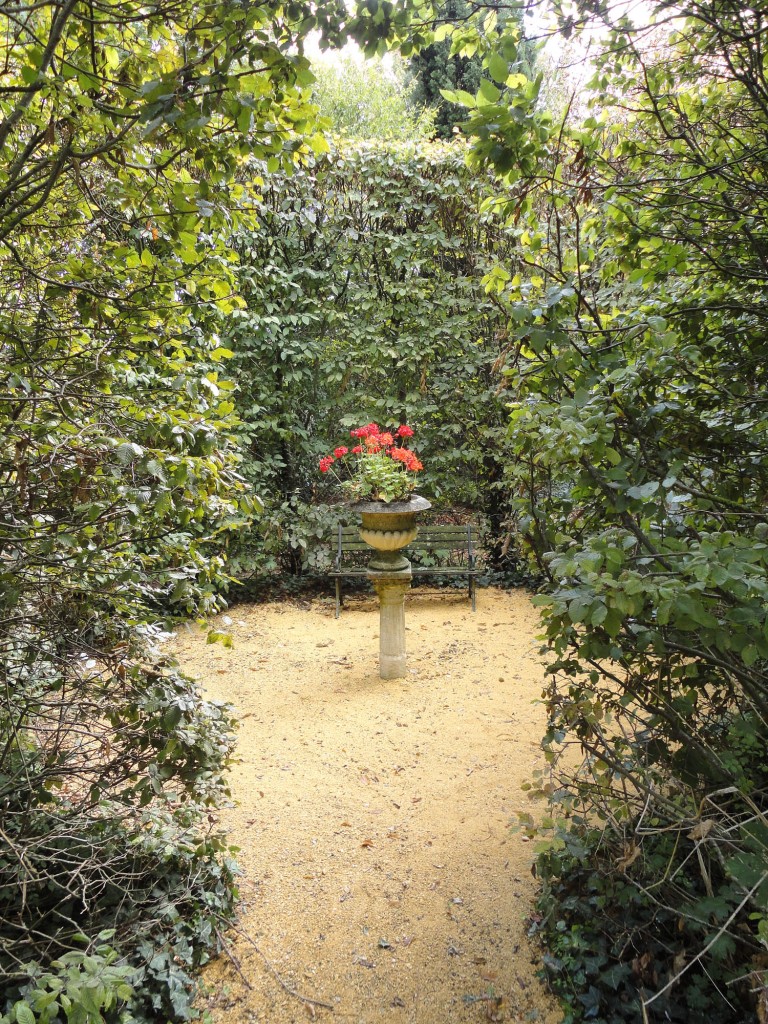 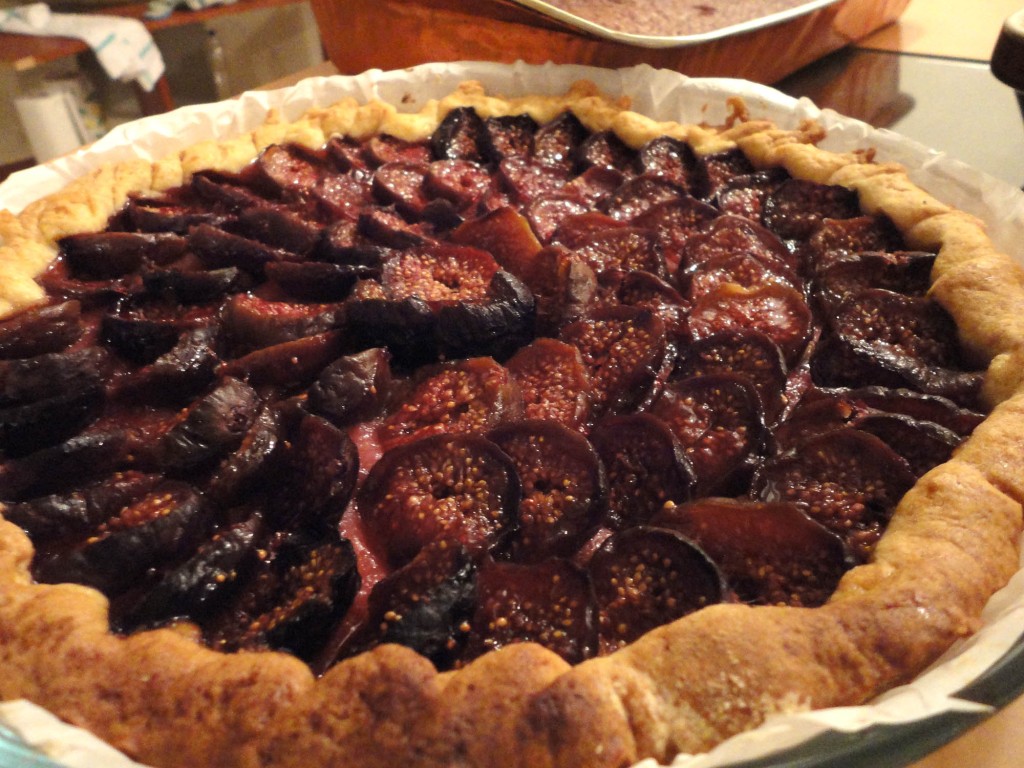 Ok now we really had to get going. Cheek kisses, thank you’s, and promises to come back one day were dished out liberally. Unopened bottles of wine from the party were offered to us as parting gifts and we set off winding our way out of tiny Villeneuve leaving behind seven centuries + one really great experience.

In total we stayed all of twenty-one hours, but in my memory it’ll always feel like a lot more. And in reality I spent about half of it with a headache that wouldn’t quit, but it won’t be long before I forget that little detail of the story. On the ride home I reflected on my luck, wondering how much money and planning it would take to have a similar adventure at a French bed & breakfast, knowing there are people right now dreaming of such things, and then here’s me stumbling into it almost by accident. It’s almost enough to make a guy feel guilty, but there’s something that keeps me from feeling too bad—whenever I talk about the struggles of starting my life over, finding my voice in a language I was never meant to speak, and acceptance as a perpetual outsider, I always say the same thing: it’s the price to pay to get into the club. So I guess I do pay for it all, just in a different way. And boy is it worth it, right down to the last pig’s ear.