During my routine walk to the bakery something leapt out from the familiar landscape and landed on the sidewalk in an incongruous bold fluorescent pink: 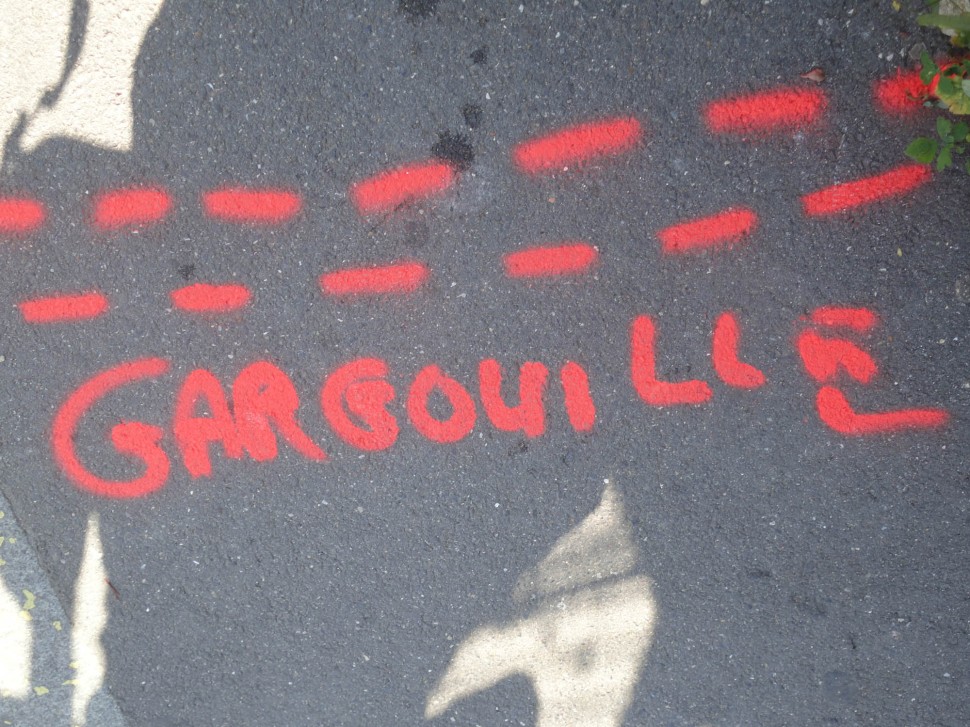 Wow a gargouille, here? For real? This was a pleasant surprise indeed.

No translating was necessary; it’s a word I’m familiar with thanks to my addiction to all things medieval and Gothic. So imagine my curiosity and intrigue to find a spray-painted indication marking out the future spot—just next to our apartment—of a gargoyle!

This notion of a beautiful gnarly stone creature moving in next door was a fleeting one however, one that didn’t even last me ‘til reaching the bakery. I was forced to acknowledge that while the word means gargoyle it has its origins in something far more basic…and far less romantic. It’s also a concept that will teach you something you probably never knew about Notre Dame Cathedral.

Partake in any amount of gargoyle Googling and in 0.21 seconds you’ll be up to your bat wings in photos of the usual suspects: scaly, thorny, fanged creatures that would do any Dungeons & Dragons pewter chess set proud. When we see these menacing surveyors high atop a piece of architecture we don’t waste any time pointing up and calling them gargoyles. But are we making a mistake?

Actually the word’s good—we’re just pointing at the wrong thing while we’re saying it. Our English word derives from the French gargouiller, a verb meaning “to gurgle”. So to find the true gargoyles of any building you just need to locate the parts of it that are gurgling, which I managed to catch in the act during a recent storm:

Yes, the gutters of course! For the medieval French (who invented Gothic architecture in the first place), most of the scary beasts carved into their structures were ones that performed a specific function: diverting pesky rainwater away from the building’s foundation to prevent erosion and instability. Symbolic and scary looking for sure (gotta fend off those evil spirits after all), but born out of a practical necessity rather than an artistic or religious one. These are the true gargoyles.

In fact if you and Doc were to DeLorean yourself back to 13th century Paris, you’d see only these half-animal/half-rainspout adornments on Notre Dame and none of the popular sculptures we always see in books and on postcards. Yes, it pains me to tell you truth—and plug your ears if you must—but all of these fantastic, perfectly Gothic-looking statues we associate with Notre Dame are really just ornaments added during its renovation in the mid 1800’s, with no historical ties to the original medieval cathedral. The most famous gargoyles in the world are basically impostors, albeit very cool and convincing ones. 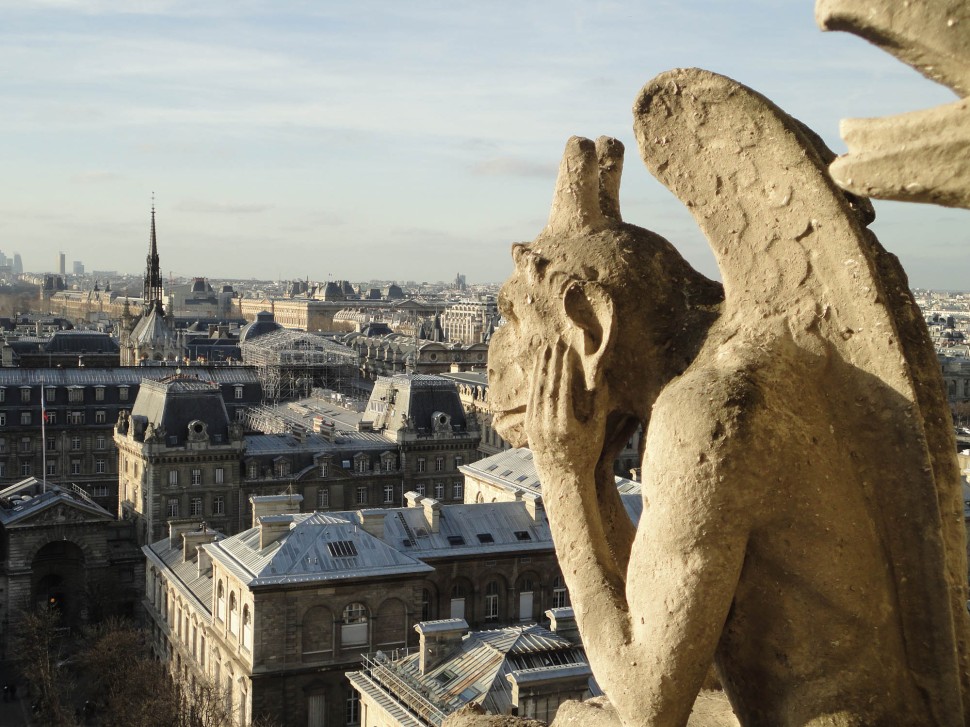 So if they aren’t gargoyles, what are they? Two terms are generally used: either grotesques or chimeras. Not that I expect people to make the change; even I call them gargoyles in most conversations to get a quick point across rather than inserting a history lesson where it doesn’t belong. It’s like correcting someone saying “who” when they should’ve said “whom”. You think it makes you look erudite but it just ends up annoying people.

So you can see why the pink spray paint on my sidewalk initially gave the hope of a cathedral-grade Gothic beast, only to fizzle into the banal offering of a modern street gutter. Such is life I guess. And I suppose it’ll serve the sidewalk better in that form, although one has to wonder: would it kill them to glue a little pewter dragon’s head at the end of it, for old time’s sake?

Maybe a secret trip to the figurine shop under the cover of night is in my future. It’s not vandalism if it’s in the name of art, right? My neighbors are going to think I’m so erudite, I can’t wait.