There are times when, despite the vast palette of descriptive shades and colors in the English language (affording it one of the largest vocabularies in the world), there are some experiences that I still, no matter how hard I try, can only describe as “cool”. As a conscientious blogger I should probably be striving to bypass such beige-colored words in search of richer hues, but sometimes a straight-out-of-the-tube adjective like “cool” just works. And that’s exactly what I’d use to describe what happened a few days ago.

I was sat on a forest green bench in Montmartre, in a sleepy square I know rather well as being the front yard of Picasso’s famous studio Le Bateau-Lavoir. Technically the original building has since burned down and been replaced with a replica but the vibe still pervades enough to invite lovers of art history to come and meditate momentarily under a tree. I still remember finding it for the first time with my mother and sister and how all three of us got chills as I read aloud my guidebook’s description of the artist’s life here. This is where he helped invent Cubism and almost single-handedly changed the modern art world with one solitary, scandalous painting: Les Demoiselles d’Avignon.

But this isn’t a post about that painting or that studio. It could’ve been, I suppose, had I not stumbled upon something even more interesting, more secret. More…cool.

My notes for the day showed that just around the corner from this tranquil square lay Picasso’s first ever studio in Paris, where he spent the fall of 1900. At the ripe age of nineteen the boy who would later become the most famous artist of the 20th century was just getting to know Montmartre and the city below it, painting and sleeping each night within the walls of my next stop at 49, rue Gabrielle. I was hoping to stand in front of the doorway of this private residence and push my mind back those 112 years, far away from the crisp lines and bright colors of modern day toward the watery spectrum of grays and browns of turn-of-the-century Montmartre, with its dilapidated brothels, dodgy alleyways, cheap wine and raucous cabarets that made up Picasso’s neighborhood at the time.

I managed to walk right past the address on my first attempt, overshooting it by half a block. After retracing my steps and scanning the small cobalt blue address plaques until their white numbers reached #49, I was blessed with an extremely rare occurrence in privacy-obsessed Paris — an open door! By habit I had approached the building from a distance with camera in hand expecting to get no more than a picture or two of the façade. But someone had mistakenly left open the magic rabbit hole leading to the fall of 1900, and I was more than happy to tumble down head first into it. I pounced into the entryway before anyone could show up and tell me otherwise. 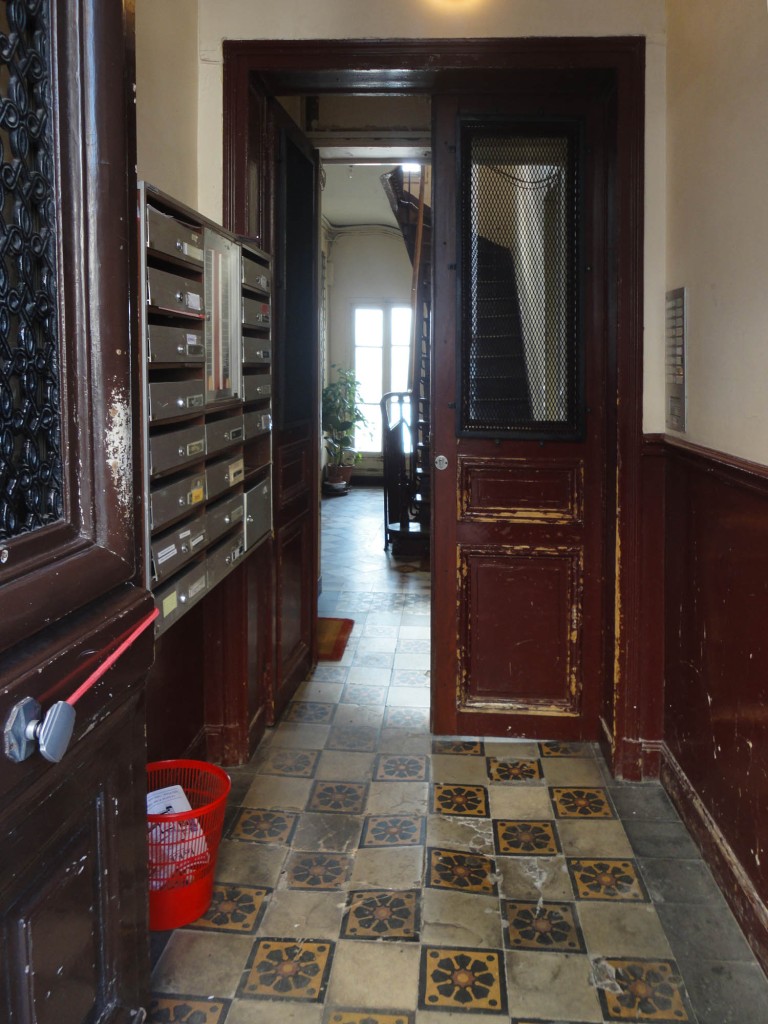 I was in. As my ears and eyes adjusted to the new space my first reaction was gratitude that the interior still had an old unpolished feel to it. I loved that it was in need of a paint job. And judging from all the worn grooves and uneven humps in the floor tiles, I’d like to think they could be the originals from way back then. The air inside was still and brisk and had yet to be warmed by the pale zinc yellow of the sun coming through the south-facing windows. What caught the eye next was the wooden staircase, as successful as the entryway in exuding a rustic authenticity with a touch of Parisian grace. 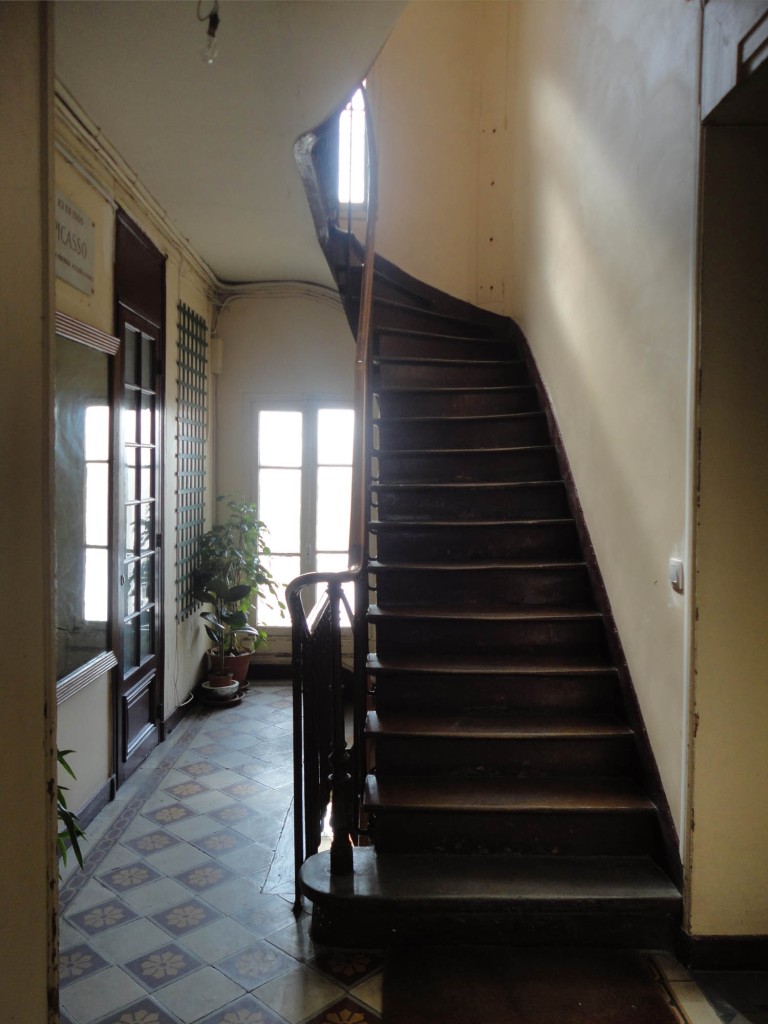 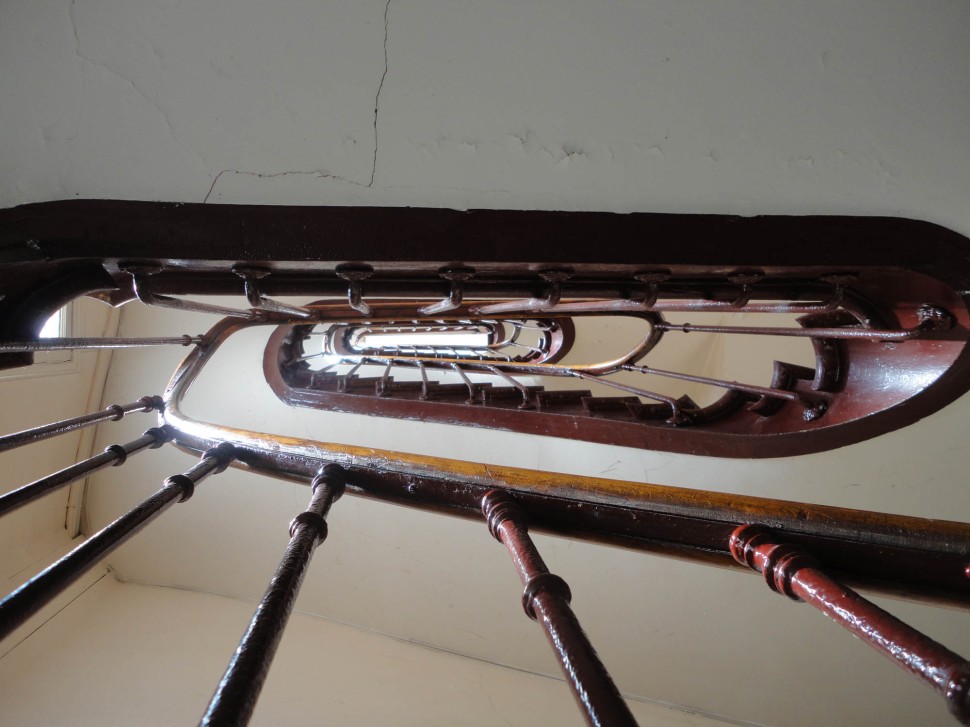 The building was dead-quiet and void of any residents. I moved further into it as silently and respectfully as if I were tiptoeing through a sanctuary during mass, and to the left hung a heavy stone plaque to confirm this particular church’s patron saint: “Here in 1900 Picasso had his first studio in Paris”. 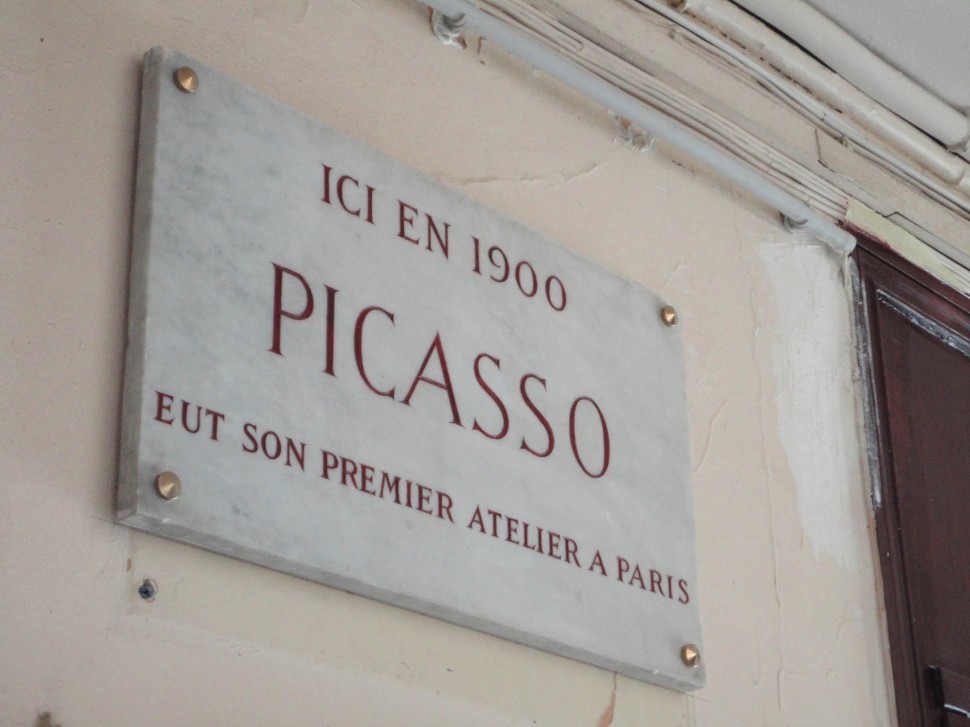 While the sign evoked a desire to find his exact room, each nondescript door painted in its innocuous coat of dark burnt sienna seemed to mumble “Nothing to see here, move along,” leaving me only to guess at which one it might have been. I was nevertheless content to have already shared Picasso’s entryway and to have now slid my hand along his railing as I descended the curve of those time-worn stairs to the lower level, finding an equally silent space with more floral-themed tile work, an old utility sink, and a back door leading to a series of terraces. 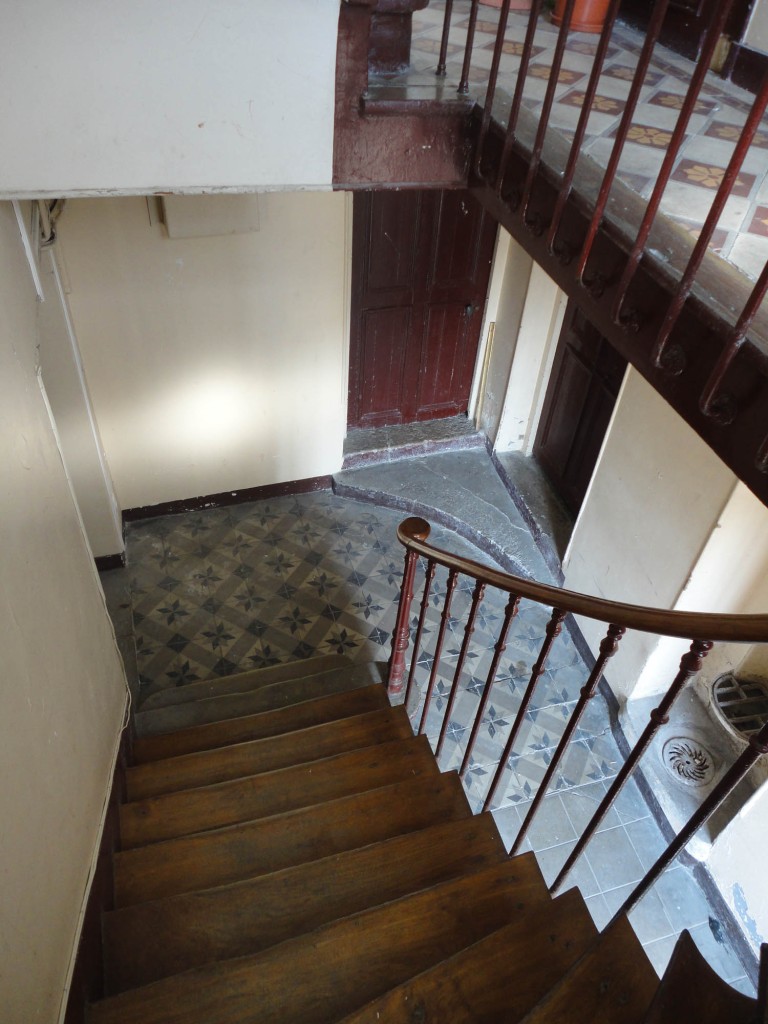 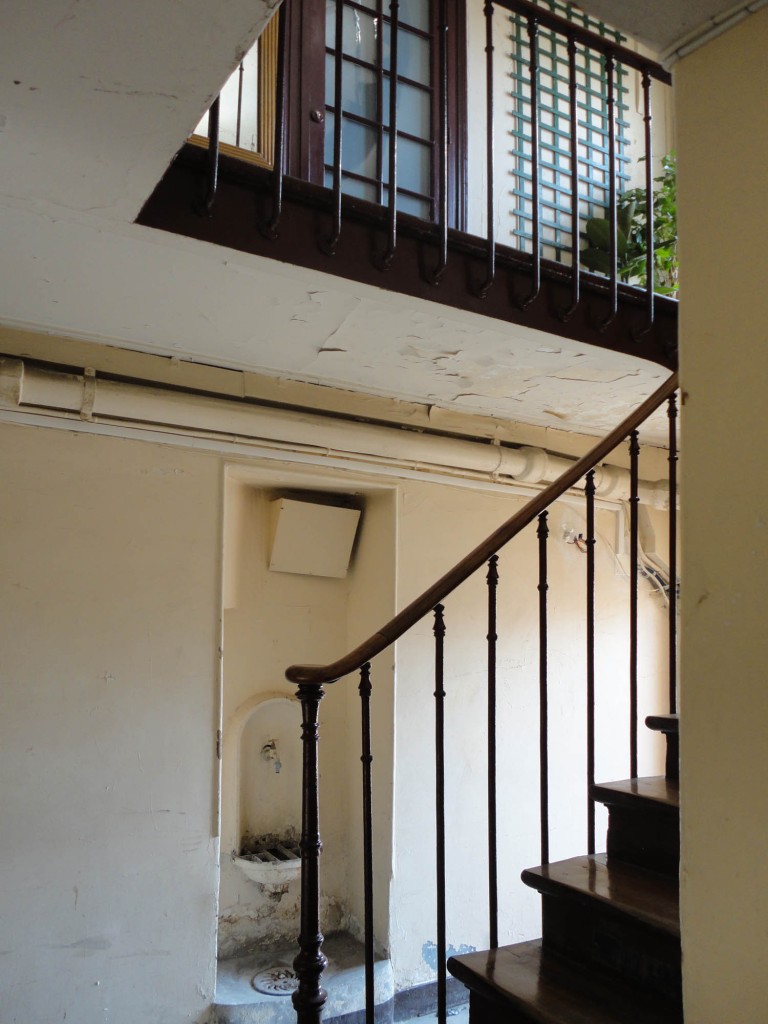 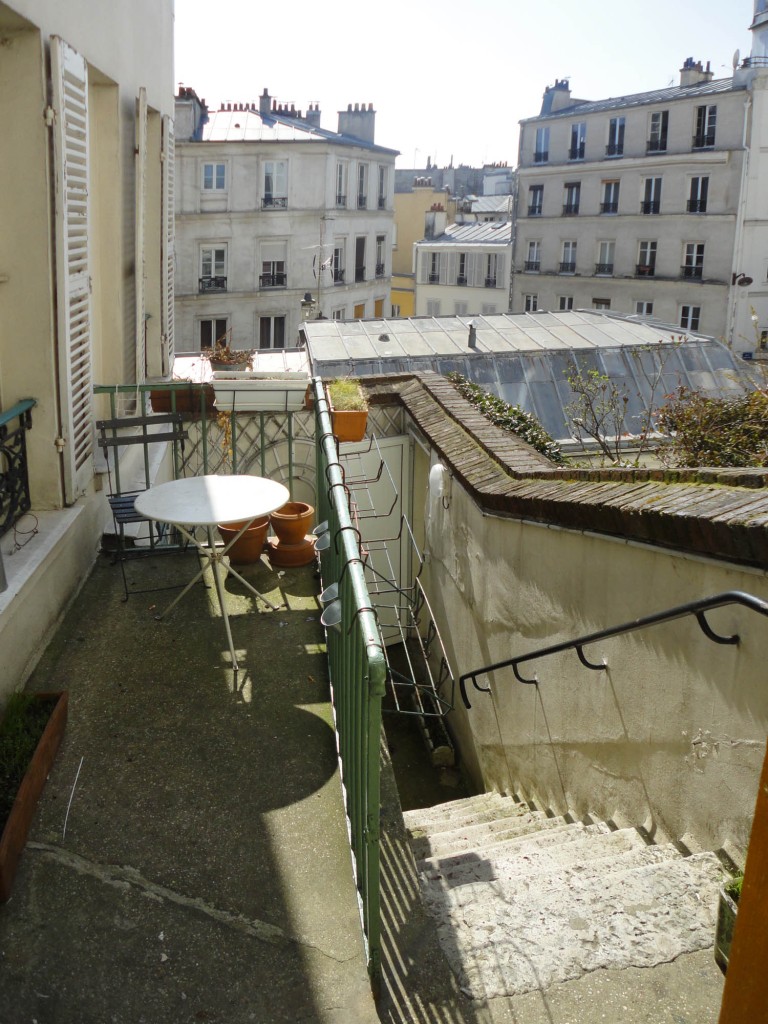 I doubt this porch was as bright and inviting in 1900, but I imagine he still would’ve come out here from time to time, a cigarette pinched between his pigment-stained fingers while he took stock of his new life as a Parisian and searched for inspiration along the jagged October skyline. Turning back around I was struck momentarily by the quiet dignity of this worn, ancient sink. It’s thoroughly possible, I mused, that this was the only source of water in a building like this 112 years ago—a line of thinking that led to the enticing conclusion that Picasso himself would have likely used it. To clean his paintbrushes perhaps? 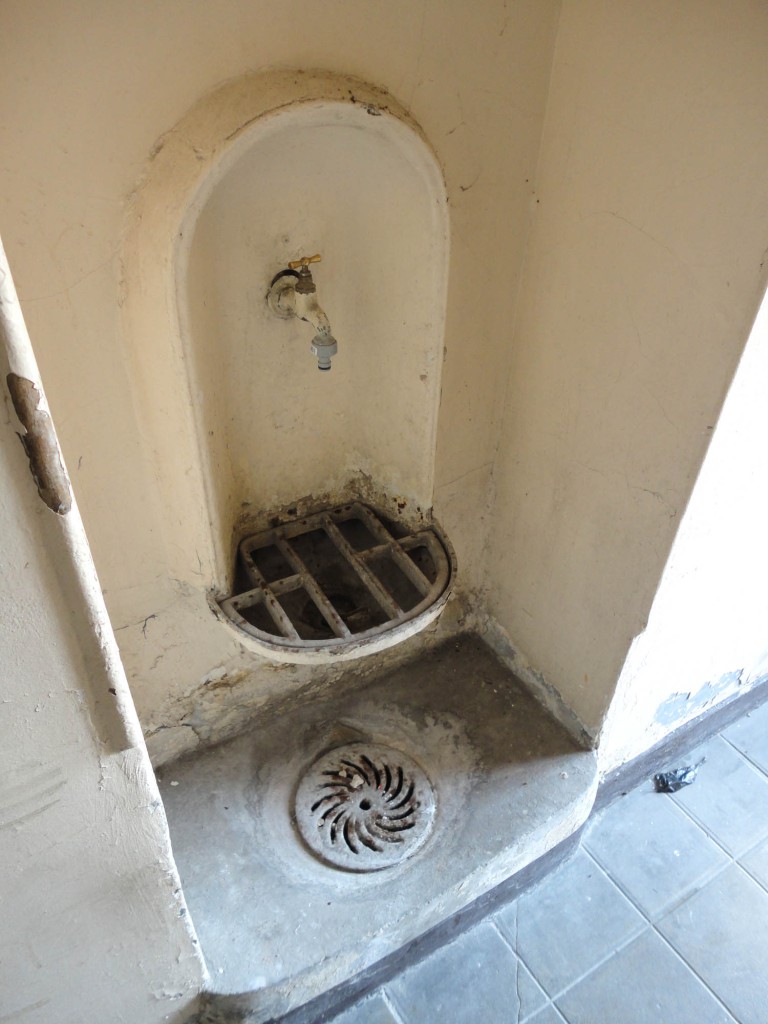 I reflected on this as my hand slid along the paint-chipped contours of the spicket and down to the catch basin. I stood beside the master himself in my mind as I watched him like a hologram scrub and scrape the studio utensils which had most likely spent the day in contact with the canvas of Le Moulin de la Galette, his first Parisian painting and one that has since been considered a masterpiece. With his thoughts lost in the turpentine-scented contemplation that oil painters know so well, I recalled his famously dark piercing eyes and wondered what sort of self-critique might be churning behind them as he stood bent over this sink. It was a cool moment in a series of cool moments; a wonderful case of luck and timing working in tandem to offer you a personal role in those formative events of Western culture which as a student seemed to only exist on the pages of textbooks and the transparencies of overhead projectors. For a second I brought to mind the image of my 1995 self in an auditorium of hundreds listening to long art history lectures, and how that younger Corey—about the same age as the Picasso who rinsed paintbrushes at this spot—had no idea just how real that history would become for him later on.

Footsteps (which constituted the first sound I had heard since entering this place) creaked in increasing volume on the stairs above and startled me from my meditation at the sink. They were footsteps that would explain the mystery of the open front door, as a construction worker struggled to maneuver a long aluminum ladder around the baluster and onto the terrace. I gave him a hand with the ladder, as well as an apology-tinted Bonjour in case he was disturbed by my presence, and decided it was time to be on my way. After a few more pictures and a final tipping of the cap to the whole experience I exited back into Montmartre 2012, with the door swinging firmly shut behind me. 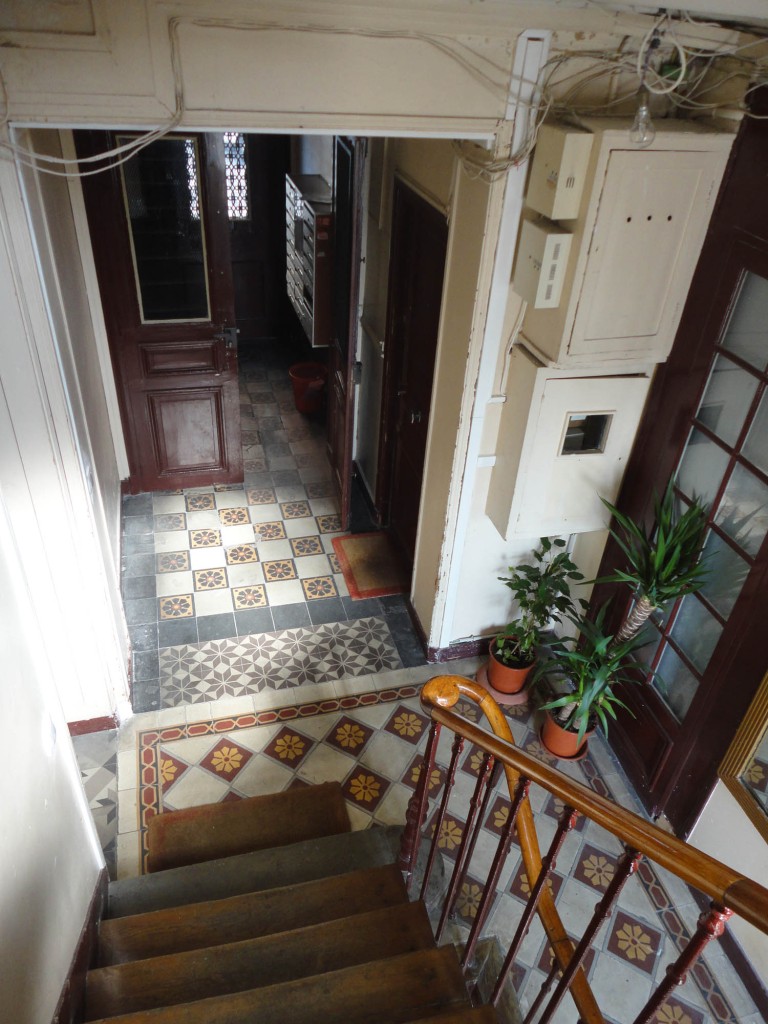 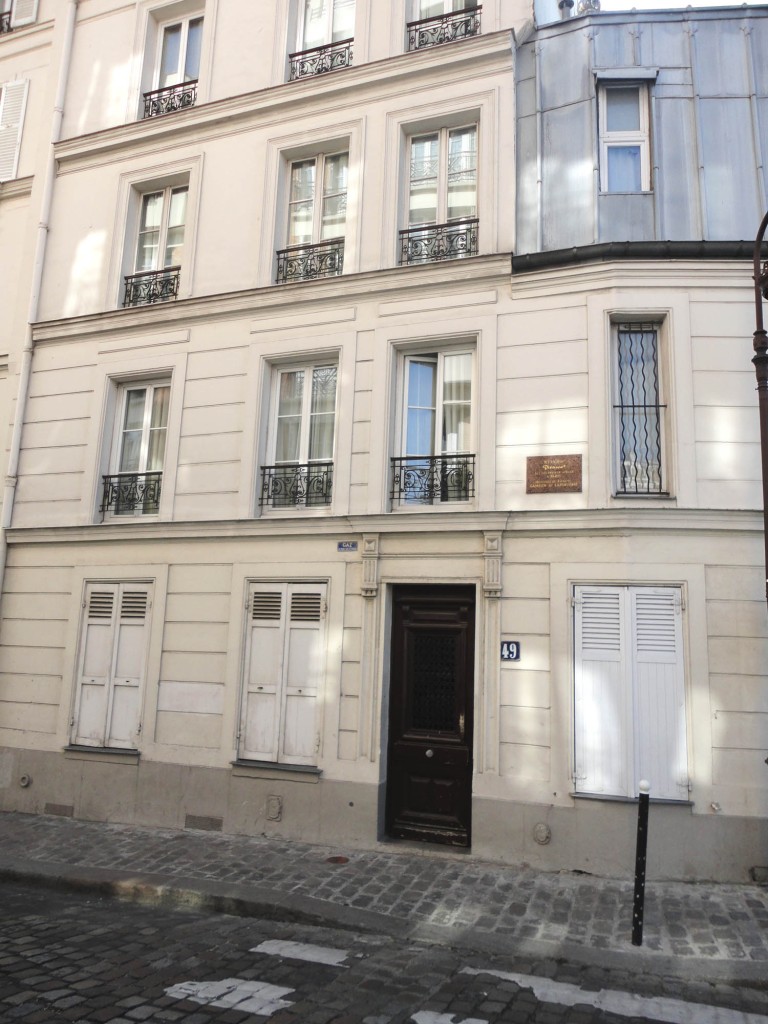 There are the meaningful moments that we organize and plan for, but it’s often the ones that materialize out of nowhere that take on the most gravitas; they’re the brief experiences that seem to have already been fully formed by the universe and packaged like a personalized guided tour, simply waiting for us to show up. If I had arrived any earlier or later that day at 49, rue Gabrielle I would’ve surely missed my chance to get inside, and oddly enough my mistake of walking past it the first time aligned me perfectly with the construction worker’s trip out to his truck to grab a ladder.

I looked back one last time and wondered how many times Picasso had taken the same path I was about to borrow for the continuation of my afternoon walk. And I thought back to all those colors that my day had been painted with so far—the forest green of the park bench, the cobalt blue address plaque on the building, the pale zinc yellow of the sun, the burnt sienna of the apartment doors—and I imagined the ways they might have inspired that 19 year-old, were he still cleaning his brushes in that old Montmartre sink, to paint his next masterpiece. And that notion, if I may be so beige about it, is very very cool.