For a long time I’d been hearing about a place in Paris with impressive Islamic architecture and an other-wordly oasis somewhere in the city. Naively I assumed it must be tucked deep inside the Arab World Institute on the edge of the Latin Quarter bordering the Seine. I regretfully admit I’m pretty ill-educated in the Muslim culture and the architecture that goes along with it, and it’s awful easy in a place like Paris to focus solely on the endless historical cache of Western History. This is why I had no intention of visiting anything Middle Eastern as I made my way through Le Jardin des Plantes toward the Roman ruins of Les Arènes de Lutece.

I happened to exit the garden at an intersection that lay halfway between my destination of Les Arènes and what was written on my street map as Mosquée de Paris. I didn’t know what to expect but it’d be foolish to be in the neighborhood and not take a peek, so I changed my path and headed to the Paris Mosque wondering if I’d see anything interesting from the outside. The front door was open and the odd tourist seemed to be floating in and out, so I moved into the entryway to see if there was anything worth seeing, and boy was there:

To my surprise it seemed that the oasis I had always heard about was actually here instead. I’d never seen anything like this in Paris, and it was something I definitely needed to get closer to. I tried to suss out the security vibe, wondering if it’s a free public space for all, or if you’d have to prove your Muslim-ness to get further inside. I decided—as is often the best strategy—to hide my camera, hold my head high and act like I had every right to be there. In fact this worked much better than I was aware of at the time: I would learn later that I’d managed to slip by the welcome desk without paying the mandatory 3€ entry fee. After turning a few corners I entered into a large open square with a covered arcade flanking all sides. The first impression was one of quiet and simplicity, but a closer look revealed an extraordinary amount of meticulous detail on almost every surface.

I sensed and appreciated the lack of other visitors—a rare occurrence in springtime Paris and probably due to most folks being as unaware as I was about where this place was. As I meandered from one impressive view to the next I reveled in the philanthropic idea that this Islamic construction was so similar to those of Christian cloisters: square community gardens with vaulted arcades surrounding all sides for monks to relax and socialize. And the level of detail in tiling and stone work was at the same time vastly different and exactly the same as the quality craftsmanship we’d see on any Gothic church. It was an affirmation that the same awe-inspiring beauty comes out of every worshiper equally throughout the world; it’s final aesthetic is simply a matter of which religious filter you pass it through.

This space led via a short decorated corridor to the coup de grâce, the central garden you can see from the building’s entrance. 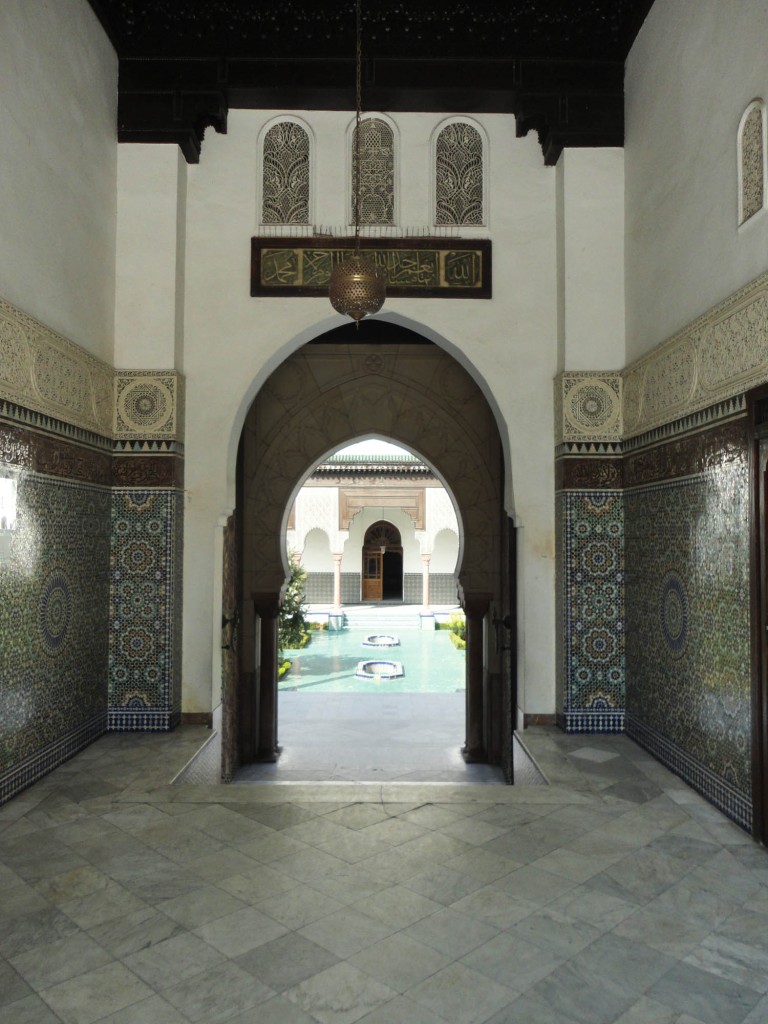 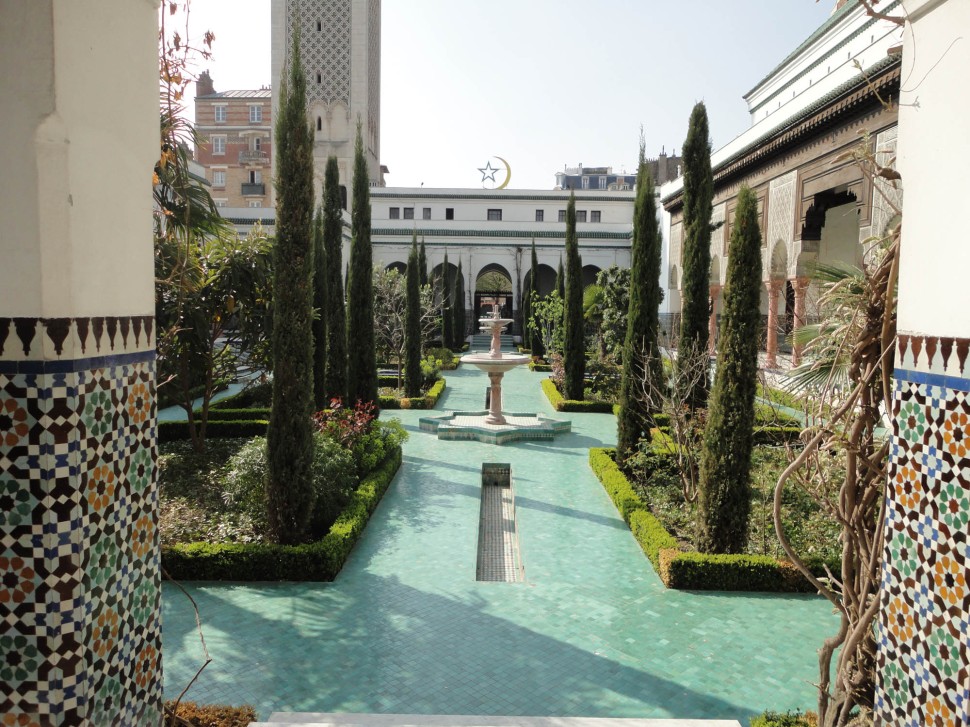 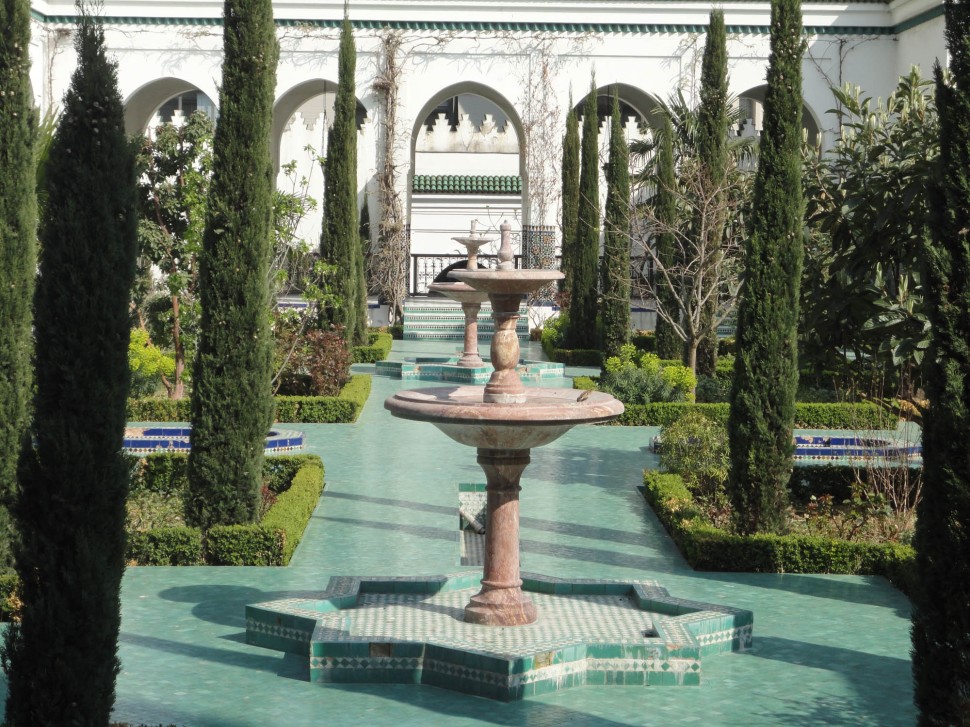 What strikes me the most is the amazing color of the floor tiling, giving the fantastic impression that you’re about to step ankle-deep into a crystal clear wade pool. Every view was an explosion of a thousand bits of shapes and colors vibrating at a low hum, in keeping with the meditative intentions of a place like this. After thinking I’d seen it all, an open door led me to a large empty room with high ceilings and even more variations of intricate pattern and color. 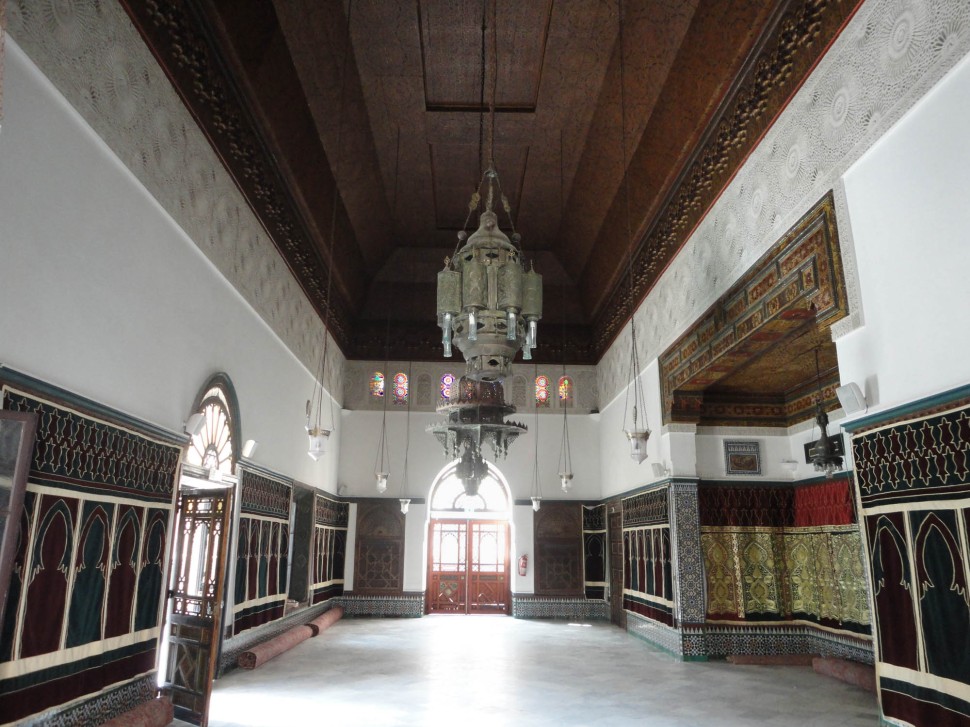 It was a bit hard to leave the Paris Mosque; it’s a space that’s just begging for appreciative visitors to stop and sink successively one by one into layers of reverence and self-reflection, not to mention its flat-out beautiful. It’s well worth the 3€ (that I never paid but will gladly do next time), and I’d recommend it as an addition to the standard touristic visit, for a quiet moment of repose and an eye-opening reminder of the similarities and differences between two cultures.